You are here: Home › physics › Walter Houser Brattain and the Age of the Transistor 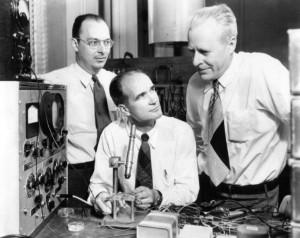 John Bardeen, William Shockley and Walter Brattain, the inventors of the transistor, 1948

On October 13, 1987, American physicist and Nobel Laureate Walter Houser Brattain passed away. At Bell Labs, Brattain along with fellow scientists John Bardeen and William Shockley, invented the point-contact transistor in December, 1947, for which they shared he 1956 Nobel Prize in Physics.

Walter Houser Brattain was born in 1902 in Xiamen, Fujian, China, to Ross R. Brattain, a teacher at the private Ting-Wen Institute, and Ottilie Houser Brattain, a gifted mathematician. The family returned to the U.S. in 1903and lived for several years in Spokane, Washington, then settled on a cattle ranch near Tonasket, Washington in 1911. Brattain attended Whitman College in Walla Walla, Washington, and earned a bachelor’s degree from Whitman College in 1924, with a double major in physics and mathematics. Brattain and his classmates Walker Bleakney, Vladimir Rojansky and E. John Workman were later known as “the four horsemen of physics” because all went on to distinguished careers. He achieved his M.A. from the University of Oregon in Eugene in 1926, and a Ph.D. from the University of Minnesota in 1929 under supervision of John Hasbrouck Van Vleck with a thesis on “Efficiency of Excitation by Electron Impact and Anomalous Scattering in Mercury Vapor.”

From National Bureau of Standards to Bell Labs

From 1927 to 1928 Brattain worked for the National Bureau of Standards in Washington, D.C., where he helped to develop piezoelectric frequency standards. In 1929 he joined Bell Telephone Laboratories to on the heat-induced flow of charge carriers in copper oxide rectifiers. Through his studies of rectification and photo-effects on the semiconductor surfaces of cuprous oxide and silicon, Brattain discovered the photo-effect at the free surface of a semiconductor. This work was considered by the Nobel prize committee to be one of his chief contributions to solid state physics.

At the time, the telephone industry was heavily dependent on the use of vacuum tubes to amplify current. But, vacuum tubes were neither reliable nor efficient, and Bell Laboratories wanted to develop an alternative technology. As early as the 1930s Brattain worked with William B. Shockley on the idea of a semiconductor amplifier that used copper oxide, an early and unsuccessful attempt at creating a field effect transistor.[7] During World War II, both Brattain and Shockley were separately involved in research on magnetic detection of submarines with the National Defense Research Committee at Columbia University.

In 1945, Bell Labs reorganized and created a group specifically to do fundamental research in solid state physics, co-led by Shockley, which was soon joined by John Bardeen.[7] Bardeen was a quantum physicist, Brattain a gifted experimenter in materials science, and Shockley, the leader of their team, was an expert in solid-state physics. Over the subsequent years, the group was trying to understand the nature of the electrons at the interface between a metal and a semiconductor. They observed that when two gold point contacts were applied to a crystal of germanium, a signal was produced with the output power greater than the input. In this way they could make a three terminal device based on semiconductors — the first transistor. The transistor had the electrical properties of a vacuum tube but was smaller, cheaper, sturdier, and more efficient. First thing they tried with the new device was to take a few of these transistors and connected them with some other components to make an audio amplifier. This audio amplifier was shown to chief executives at Bell Telephone Company, who were very impressed that it didn’t need time to “warm up” like the heaters in traditional vacuum tube circuits. They immediately realized the power of this new technology.[1]

“It is of interest to those that ask whether we knew how important this was, that the evening of the first day, when John had come in and suggested the geometry, I told my riding group that night, going home, that I felt that I had that day taken part in the most important experiment I had ever taken part in in my life. And the next evening going home with them I had to swear them to secrecy.” Walter H. Brattain in 1948[4]

The Discovery of the Transistor

On June 30, 1948, Bell Laboratories held a press conference to publicly announce their discovery. They also adopted an open policy in which new knowledge was freely shared with other institutions. By doing so, they avoided classification of the work as a military secret, and made possible widespread research and development of transistor technology. Shockley believed (and stated) that he should have received all the credit for the discovery of the transistor. He actively excluded Bardeen and Brattain from new areas of research, in particular the junction transistor, which Shockley patented. Brattain continued to study the surface properties of solids and the “transistor effect”, so as to better understand the various factors underlying semiconductor behavior. Describing it as “an intolerable situation”, Bardeen left Bell Laboratories in 1951 to go to the University of Illinois, where he eventually won a second Nobel Prize for his theory of superconductivity.

After leaving Bell Laboratories in 1967, Brattain served as adjunct professor at Whitman College, Walla Walla, Wash. (1967–72), then was designated overseer emeritus.[3] Brattain later collaborated with P. J. Boddy and P. N. Sawyer on several papers on electrochemical processes in living matter. He became interested in blood clotting after his son required heart surgery. He also collaborated with Whitman chemistry professor David Frasco from 1965 to 1975, using phospholipid bilayers as a model to study the surface of living cells and their absorption processes.

At yovisto academic video search you can watch an interview with Nobel laureate William Shockley from 1969, where he talks about the invention of the transistor.