You are here: Home › chemistry › Ernest Solvay and his Love for Physics 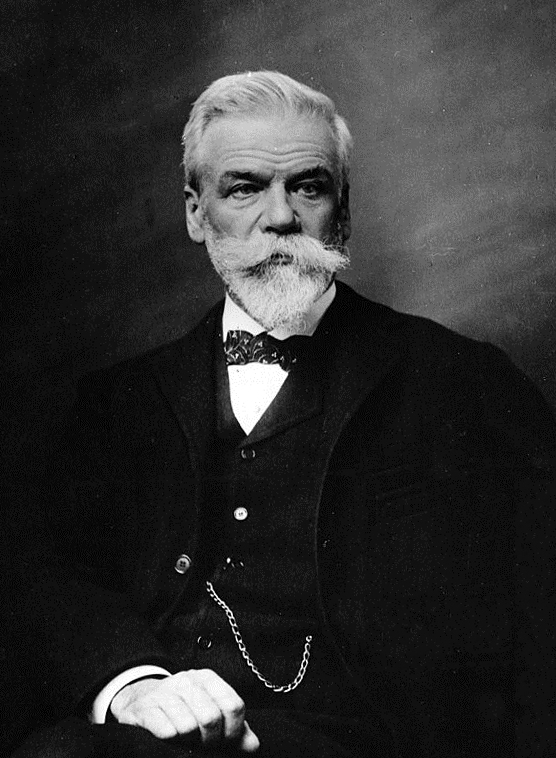 On April 16, 1838, Belgian chemist, industrialist and philanthropist Ernest Gaston Joseph Solvay was born. Solvay invented the Solvay Process (1863), a commercially viable ammonia-soda process for producing soda ash (sodium carbonate), widely used in the manufacture of such products as glass and soap. In 1911, he began a series of important conferences in physics, known as the Solvay Conferences, whose participants included luminaries such as Max Planck, Ernest Rutherford, Maria Skłodowska-Curie, Henri Poincaré, and Albert Einstein.

“There are no limits to what science can explore.” (Ernest Solvay)

Solvay was born at Rebecq, 30km away from Brussels, Belgium, as second son among five siblings of Alexandre Solvay and Adèle Hulin. His father was the owner of a quarry. Later he first founded an oil and soap store and then a salt-boiling plant. After attending local schools, Solvay entered his father’s salt-making business since he was prevented by acute pleurisy from going to university. At the age of 21 he began working with an uncle at a gasworks near Brussels, and while there he began to develop the conversion method for which he is known.[1]

The Ammonia-Soda Process at Scale

Solvay began experimenting with the ammonia-soda reaction as a means of producing soda ash, which was then in great demand by the glass and soap industries driven by the industrial revolution. Most soda ash at the time was produced by the Leblanc process of converting common salt, a method which was expensive and created unusable byproducts.[7] In 1861, Solvay developed the ammonia-soda process for the manufacturing of soda ash (anhydrous sodium carbonate) from brine (as a source of sodium chloride) and limestone (as a source of calcium carbonate). Thus, Solvay had solved the practical problems of conducting the ammonia-soda process on a large scale, unaware that many chemists had tried and failed to do this over the past fifty years. He devised carbonating towers, which allowed large amounts of ammonia, salt solution, and carbon dioxide to be mixed. His process also allowed the recovery of expensive ammonia, which could then be reused.[2]

Already in 1861 together with his brother Alfred, Solvay established a small works in the Schaerbeek district of Brussels. Following some small success, and supported financially by the family, the Solvay brothers built, in 1863, a factory at Couillet, near Charleroi; production started in 1865. Solvay patented every stage of the process but granted licenses to soda manufacturers in other countries.[3] Soon, Solvay process plants were established in the United Kingdom, the United States, Germany and Austria. The first U.S. plant using the process was built at Syracuse, N.Y., in 1882. Today, about 70 Solvay process plants are still operational worldwide. The development of this process not only made the manufacture of soap and glass less expensive but also led to the establishment of the chlorine and chloralkali industries. Approximately 4 million tons of sodium carbonate are produced in the U.S. annually by the Solvay process, and 3 million tons are recovered from natural deposits. The compound is also used in the manufacture of ceramics and in the pulping of wood to make paper. It is also used in petroleum refining, as a water softener, as a cleaner and degreaser in washing compounds, and in the manufacture of other sodium-containing compounds, such as sodium hydroxide.[4]

The exploitation of his patents brought Solvay considerable wealth, which he used for philanthropic purposes, including the establishment in 1894 of the “Institut des Sciences Sociales” (ISS) or Institute for Sociology at the Free University of Brussels, as well as International Institutes for Physics and Chemistry. In 1903, he founded the Solvay Business School which is also part of the Free University of Brussels.

In 1911, he began a series of important conferences in physics, known as the Solvay Conferences, whose participants included luminaries such as Max Planck, Ernest Rutherford, Maria Skłodowska-Curie, Henri Poincaré, and (then only 32 years old) Albert Einstein. A later conference would include Niels Bohr, Werner Heisenberg, Max Born, and Erwin Schrödinger. Topics discussed at these conferences range over such broad areas of science as electrons and photons (1928), the solid state (1951), and the origin and structure of the universe. The usual schedule of the conference is every three years, but there have been larger gaps. 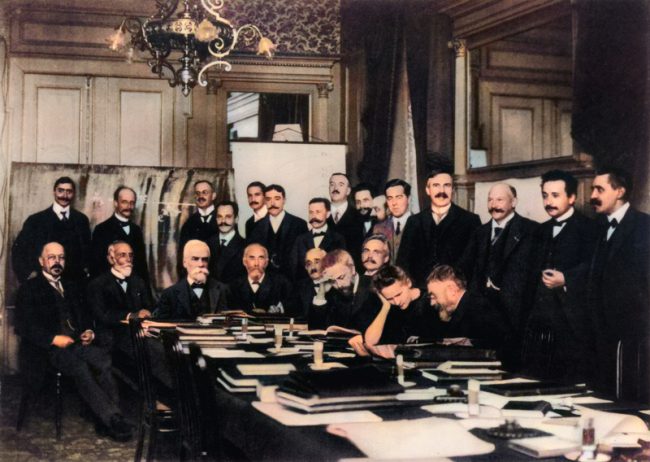 Participants to the first Solvay Conference in 1911. Ernest Solvay is the third seated from the left.

The first Solvay Conference was held in Brussels in the autumn of 1911. The subject was Radiation and the Quanta. This conference looked at the problems of having two approaches, namely the classical physics and quantum theory. Albert Einstein was the second youngest physicist present including further famous participants Marie Skłodowska-Curie and Henri Poincaré. Perhaps the most famous conference was the October 1927 Fifth Solvay International Conference on Electrons and Photons, where the world’s most notable physicists met to discuss the newly formulated quantum theory. The leading figures were Albert Einstein and Niels Bohr. Einstein, disenchanted with Heisenberg’s uncertainty principle, remarked “God does not play dice“. Bohr replied, “Einstein, stop telling God what to do“. 17 of the 29 attendees were or should become Nobel Prize winners. This conference was also the culmination of the struggle between Einstein and the scientific realists, who wanted strict rules of scientific method as laid out by Charles Peirce and Karl Popper, versus Bohr and the instrumentalists, who wanted looser rules based on outcomes.

Solvay was twice elected to the Belgian Senate for the Liberal Party and appointed Minister of State at the end of his life. He died at Ixelles at the age of 84.