You are here: Home › physics › J. Hans D. Jensen and the Uranium Club 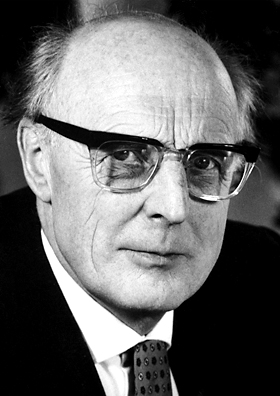 On June 25, 1907, German nuclear physicist Johannes Hans Daniel Jensen was born. During World War 2, Jensen worked on the German nuclear energy project, known as the Uranium Club, in which he made contributions to the separation of uranium isotopes. Jensen shared half of the 1963 Nobel Prize in Physics with Maria Goeppert-Mayer for their proposal of the nuclear shell model.[8]

Hans Jensen was born on 25 June 1907 as the third child of the gardener Karl Friedrich Jensen and his wife Helene Auguste Adolphine (née Ohm). From 1926 he studied physics, mathematics, physical chemistry and philosophy at the University of Hamburg and the Albert-Ludwigs-University in Freiburg im Breisgau. After receiving his doctorate in physics from Wilhelm Lenz, he remained in Hamburg as a scientific assistant and habilitated in 1936.

Hans Jensen was appointed Privatdozent at the University of Hamburg in 1937. Back then, he also started working with Paul Harteck, the director of the university’s physical chemistry department and advisor to the Heereswaffenamt on explosives. In 1939, Harteck contacted the Reichskriegsministerium (Reich Ministry of War) in order to inform about potential military applications of nuclear chain reactions. Earlier that year, Otto Hahn and his assistant Fritz Strassmann sent a manuscript to the German science journal Naturwissenschaften reporting that they had detected and identified the element barium after bombarding uranium with neutrons. Before the article was published, Hahn sent the results and his conclusion of a bursting of the uranium nucleus in a letter to his colleague and friend Lise Meitner,[6] who had fled Germany in July to the Netherlands and then to Sweden. She and her nephew Otto Frisch confirmed Otto Hahn’s conclusion and interpreted the results as “nuclear fission”.[7]

Hans Jensen became extraordinarius professor of theoretical physics at the Technische Hochschule Hannover in 1941. Five year later he was appointed ordinarius professor and later on he switched to the Ruprecht Karl University of Heidelberg. In 1950 he described giant resonances with Helmut Steinwedel using a two-fluid model of proton and neutron fluid. In 1955, together with his student Berthold Stech, he introduced chiral symmetry to the theory of weak interaction, a precursor of the later V-A theory of Richard Feynman and Murray Gell-Mann (1958). In 1963 Jensen shared half of the Nobel Prize in Physics with Maria Goeppert-Mayer for their proposal of the nuclear shell model. The remaining half of the prize was awarded to Eugene Wigner for unrelated work in nuclear and particle physics, especially through the application of fundamental symmetry principles.