You are here: Home › history › Umberto Eco and The Name of the Rose 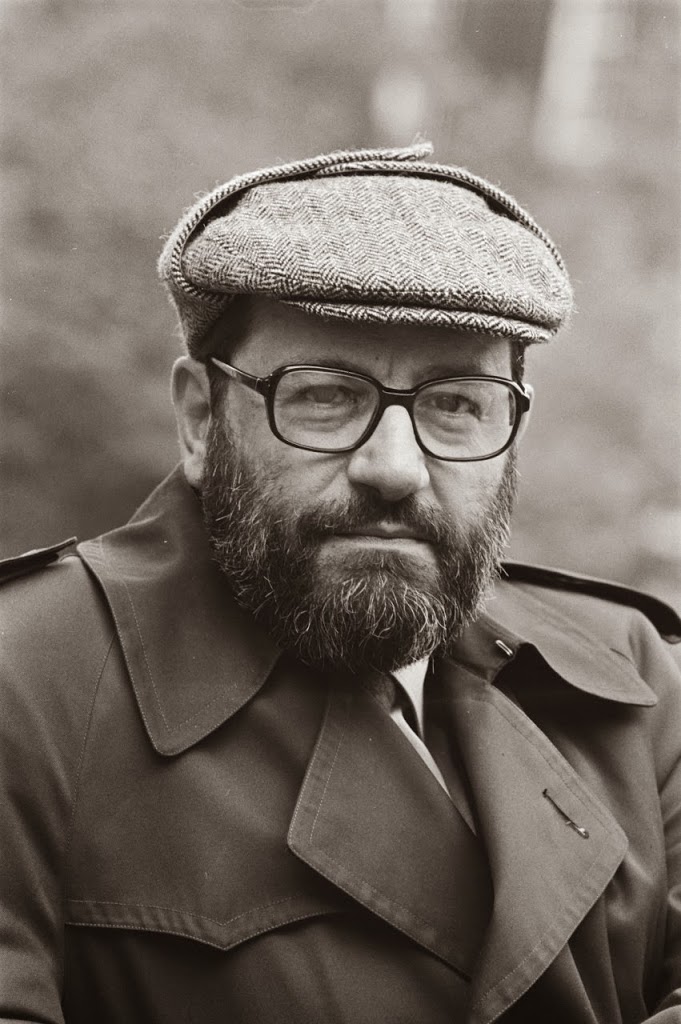 On January 5, 1932, Italian semiotician, essayist, philosopher, literary critic, and successful novelist Umberto Eco was born. He is best known for his groundbreaking historical mystery novel Il nome della rosa (The Name of the Rose), an intellectual mystery combining semiotics in fiction, biblical analysis, medieval studies and literary theory. I have read ‘The Name of the Rose‘, when I was just 20 years of age, and ever since I am a fan of Umberto Eco‘s writings. What makes his novels so different and what has become a kind of genre ever since, are the footnotes to his writings, which come as an addendum most times in the back of his books. Umberto Eco was writing historical novels, i.e. novels which take place in front of some historical background, as e.g., the medieval monastery where ‘The Name of the Rose‘ is staged. Moreover, his novels are full of allusions and references, which again are then explained in the footnotes. If you are interested in Eco‘s scientific subject ‘semiotics‘ and if you have fun reading historical novels, for sure you will also like his writings.

“A book is a fragile creature, it suffers the wear of time, it fears rodents, the elements and clumsy hands. so the librarian protects the books not only against mankind but also against nature and devotes his life to this war with the forces of oblivion.” (Umberto Eco)

Umberto Eco was born on January 5, 1932, in Alessandria, Piedmont, Italy. His father, Giulio Eco, was an accountant before the government called upon him to serve in three wars. Eco received a Salesian education, and you will find references to the order and its founder distributed over Eco’s writings. When the second World War broke out, Eco and his mother moved to a small Piedmontese village in the mountains. Despite his father’s ardent wish to become a lawyer, Umberto entered the University of Turin in order to take up medieval philosophy and literature, writing his thesis on Thomas Aquinas and earning his Laurea in philosophy in 1954.[6] Eco then worked as a cultural editor for the state broadcasting station Radiotelevisione Italiana (RAI) and lectured at the University of Turin (1956–1964). In 1956, his first book was published ‘Il problema estetico in San Tommaso‘ (The Aesthetics of Thomas Aquinas), which was an extension of his doctoral thesis.

“But now I have come to believe that the whole world is an enigma, a harmless enigma that is made terrible by our own mad attempt to interpret it as though it had an underlying truth.” (Umberto Eco)

In 1959 he both published his second work and lost his job at the RAI. The book, Sviluppo dell’estetico medievale (Art and Beauty in the Middle Ages), was significant in that not only did it establish Eco as one of the foremost thinkers in medievalism, but it finally convinced his father that he had indeed made the right career decision. Eco continued producing academic works throughout 1960s focusing on semiotics, a discipline which holds that all intellectual and cultural activity can be interpreted as systems of signs, while also contributing to a number of scholarly publications on a regular basis. In addition to this, Eco also pursued teaching at various universities in Florence and Milan. He became the first professor of semiotics at the University of Bologna in 1971 and published A Theory of Semiotics in 1973.

“I myself like easy books that put me to sleep immediately. But the normal reader who does not spend his day fighting with Kant or Hegel feels respected if there is a jujitsu with a novel, a resistance, a seduction. If the book says yes immediately, it is a whore.” (Umberto Eco)

The Name of the Rose

The year 1978 marked a significant turn in Eco’s career when he decided to write a novel following an invitation from a friend. The detective story, The Name of the Rose became an international bestseller establishing a new identity of Umberto Eco. In 1986, the book was adapted to screen with a star cast of Sean Connery and Christian Slater. When asked in an interview, what drove him to write ‘The Name of the Rose‘, he answered that he simply felt like “poisoning a monk…”. The novel has sold over 50 million copies worldwide, becoming one of the best-selling books ever published. It has received many international awards and accolades, such as the Strega Prize in 1981 and Prix Medicis Étrangère in 1982, and was ranked 14th on Le Monde’s 100 Books of the Century list. For Eco, there was no looking back and he continued writing exceptional novels such as Foucault’s Pendulum, The Island of the Day Before, The Mysterious Flame of Queen Loana and The Prague Cemetery. Eco’s second novel, Foucault’s Pendulum, is an even more ambitious attempt to incorporate Eco’s ideas of the limits of interpretation into a mystery story. From my personal point of view ‘Foucault’s pendulum‘ is much more interesting than ‘The Name of the Rose‘, simply because it is one of those wonderfully annoying books which finally reveals the great truth that there is no “Great Truth”.

Since 1999 Eco has headed the Scuola Superiore di Studi Umanistici at the University of Bologna. In October 2007 he retired from active teaching and became professor emeritus of the University of Bologna in 2008. Eco named Jorge Luis Borges [9] and James Joyce [10] as the two modern authors “whom I loved most and by whom I was most influenced“. As a citizen and political author, Eco was also an active and vehement opponent of Silvio Berlusconi. In numerous newspaper and magazine articles he has sharply criticized his policies. In 2005 Umberto Eco was voted the second most important intellectual in the world after Noam Chomsky and Richard Dawkins in the English magazine Prospect. Umberto Eco died late in the evening of 19 February 2016 at the age of 84 in his Milan apartment due to cancer. [14,15]

Umberto Eco, The Library as a Model for Culture: Preserving, Filtering, Deleting & Recovering, [13]