You are here: Home › physics › Emilio Segrè and the Discovery of the Antiproton 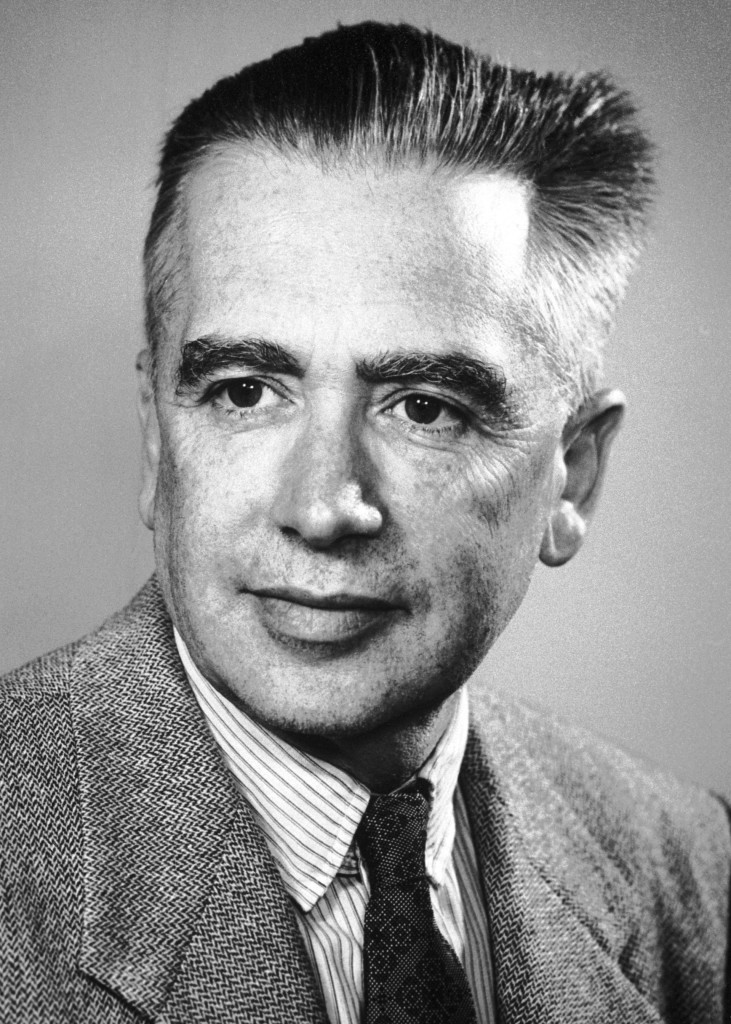 On February 1, 1905, Italian physicist and Nobel Laureate Emilio Segrè was born. Segrè is best known for his discovery of the elements technetium and astatine, and the antiproton, a sub-atomic antiparticle, for which he was awarded the Nobel Prize in Physics in 1959.

“If some nuclear properties of the heavy elements had been a little different from what they turned out to be, it might have been impossible to build a bomb. “
— Emilio Segrè, in Enrico Fermi: Physicist (1970), 149.

Emilio Segrè was born into a Sephardic Jewish family in Tivoli, near Rome, the son of Giuseppe Segrè, a businessman who owned a paper mill, and Amelia Susanna Treves. He attended the University of Rome La Sapienza as a student of engineering. After five years, Segrè switched to physics and earned his doctorate degree in 1928 under Enrico Fermi.[1] After a short army service in 1928/29, Segrè became assistant to Orso Mario Corbino and had a Rockefeller Foundation Fellowship in 1930, by which he collaborated with Otto Stern in Hamburg and Peter Zeeman in Amsterdam. The first field in Segrè’s research was atomic spectroscopy. He made significant contributions to spectroscopy of forbidden lines and studied the Zeeman effect. His work in nuclear physics began began in the mid 1930s together with Enrico Fermi.

The Discovery of Technetium

Emilio Segré was appointed Assistant Professor at the University of Rome in 1932 and continued working with Enrico Fermi. In 1936, Segré was appointed Director of the Physics Laboratory at the University of Palermo. After a visit in the radiation laboratory of the University of California, Berkeley in 1937,[3] he persuaded cyclotron inventor Ernest Lawrence [3] to let him take back some discarded cyclotron parts that had become radioactive.  He received a molybdenum strip from the cyclotron deflector with unusual radioactive emissions.Segrè enlisted his colleague Perrier to attempt to prove, through comparative chemistry, that the molybdenum activity was indeed from an element with the atomic number 43.

After chemical and theoretical analysis, Segrè was able to show that it was an undiscovered chemical element that he named Technetium. It was the first artificially produced element of which there are no natural occurrences. They chose the name technetium, as it was the first artificially synthesized chemical element named after the Greek word τεχνητός, meaning “artificial”. From the 1860s through 1871, early forms of the periodic table proposed by Dmitri Mendeleev [2] contained a gap between molybdenum (element 42) and ruthenium (element 44). In 1871, Mendeleev predicted this missing element would occupy the empty place below manganese and have similar chemical properties. Mendeleev gave it the provisional name ekamanganese (from eka-, the Sanskrit word for one) because the predicted element was one place down from the known element manganese. The discovery of element 43 was finally confirmed in a December 1936 experiment at the University of Palermo in Sicily by Carlo Perrier and Emilio Segrè.

The Discovery of Astatine and Pu 239

During Segrè’s summer stay in California in 1938, Mussolini’s fascists enacted anti-Semitic laws in Italy that excluded Jews from university positions.As a Jew, Segrè was forced to emigrate from Italy and remained in the USA. Lawrence gave him a job as an assistant in the Berkeley Radiation Laboratory for 300 US dollars a month, but a very low position for the discoverer of a new element. Since Segrè was legally bound to California, Lawrence reduced his salary to 116 US dollars. Segrè found parallel employment as a lecturer at the University of California, Berkeley. Together with Corson and Mackenzie Segrè furthermore discovered the element astatine, and together with Kennedy, Seaborg, and Wahl, plutonium-239 as well as its fission properties.

From 1943 to 1946 Segrè worked on the Manhattan project of the Los Alamos National Laboratory as a group leader. In 1944 he became a citizen of the United States. He returned to Berkeley in 1946 as a physics professor, which he remained until 1972. In 1974 he accepted a professorship in nuclear physics in Rome.

The Antiproton and the Nobel Prize

In 1955, working with Chamberlain and others, he began searching for the antiproton, a subatomic antiparticle of the proton. The antiparticle of the electron, the positron had been predicted by Paul Dirac in 1931 and then discovered by Carl D. Anderson in 1932. By analogy, it was now expected that there would be an antiparticle corresponding to the proton, but no one had found one, and even in 1955 some scientists doubted that it existed. Using Lawrence’s Bevatron set to 6 GeV, they managed to detect conclusive evidence of antiprotons. Chamberlain and Segrè were awarded the 1959 Nobel Prize in Physics for their discovery. This was controversial, because Clyde Wiegand and Thomas Ypsilantis were co-authors of the same article, but did not share the prize.

During the 1950s, Segrè edited Fermi’s papers. He later published a biography of Fermi, Enrico Fermi: Physicist (1970). He published his own lecture notes as From X-rays to Quarks: Modern Physicists and Their Discoveries (1980) and From Falling Bodies to Radio Waves: Classical Physicists and Their Discoveries (1984). He also edited the Annual Review of Nuclear and Particle Science from 1958 to 1977 and wrote an autobiography, A Mind Always in Motion (1993), which was published posthumously. In 1972 he reached the University of California’s compulsory retirement age. However, he continued teaching the history of physics. In 1974 he returned to the University of Rome as a professor, but served only a year before reaching the mandatory retirement age.