You are here: Home › physics › Now I am become Death, the Destroyer of Worlds – The Trinity Test

On July 16, 1945, the first detonation of a nuclear device with the code name Trinity took place in the Jornada del Muerto desert in New Mexico. Although nuclear chain reactions had been hypothesized already in 1933 and the first artificial self-sustaining nuclear chain reaction (Chicago Pile-1) had taken place in December 1942, the date of the Trinity test is usually considered to be the beginning of the Atomic Age. Los Alamos director Robert Oppenheimer stated later that, while watching the test, he was reminded of a line from the Hindu scripture Bhagavad Gita:[8]

“Now I am become Death, the destroyer of worlds.”

Soon after the German physicists Otto Hahn [4] and his assistant Fritz Strassmann were able to show that nuclear fission can be achieved in 1938, Hahn‘s other assistant Lise Meitner realized that this might lead to a self-sustaining chain reaction,[5] where incredible amounts of energy must be set free. And with this hugh amount of energy being set free in almost an instant, also a nuclear bomb with immense destructiveness became possible. When in 1939 world war II began, also scientists on the other side of the Atlantic foresaw this possibility. In 1939 a letter was sent by prominent German emigrant physicists Albert Einstein and his former student Leo Szilard to U.S. President Franklin D. Roosevelt warning of the possibility that Nazi Germany might be attempting to build an atomic bomb.[6,7] Together with other scientists they “regarded it as their responsibility to alert Americans to the possibility that German scientists might win the race to build an atomic bomb, and to warn that Hitler would be more than willing to resort to such a weapon.“. In 1942, Roosevelt authorized the Manhattan Project, as the American nuclear physics effort was called, to research and develop a nuclear device.

Its headquarters was the newly established Los Alamos nuclear facility in New Mexico. Robert Oppenheimer led the group of 6000 scientists at Los Alamos, and was the project’s scientific head. Research, development, and production efforts bundled within the Manhattan Project focused both on the development of the necessary fissile materials to power the nuclear chain reactions in the atomic bombs and on the design, testing, and manufacture of the bombs themselves. From January 1944 until July 1945, large-scale production plants were set in operation, and the fissile material – uranium-235 and plutonium -thus produced was then used to determine the features of the weapons. Actually, Plutonium could be produced much easier compared to uranium-235 in nuclear reactors, but the technology and science involved was wholly new. The first experimental nuclear reactor had been developed and constructed by Enrico Fermi and his team by the end of 1942 at the University of Chicago.[9]

Two different bomb design concepts were developed: a simple gun-type atomic bomb based on uranium 235 and an implosion-type design for a plutonium-fueled bomb. In early 1945, scientists were confident that an implosion device would work, but these new design difficulties were great. It was decided that a full-sized test would be required before any military use, even though it would sacrifice one of a very small number of bombs. The plans for a July 1945 test were finalized. The uranium weapon would not be tested; its success could be more or less guaranteed by measurements ahead of time. The date of the Trinity test, Monday July 16, was established in the belief that a successful test would enhance the position of President Truman, who was scheduled to meet with Allied leaders Winston Churchill and Joseph Stalin in Potsdam, Germany on Tuesday July 17.

The test bomb, called ‘the gadget’ was tested at Trinity Site, New Mexico, near Alamogordo. For the test, the gadget was lifted to the top of a 30 m bomb tower. It was feared by some that the Trinity test might “ignite” the earth’s atmosphere, eliminating all life on the planet, although calculations had determined this was unlikely. The detonation was initially planned for 4:00 am but was postponed because of rain and lightning from early that morning. At 05:10, the twenty-minute countdown began. Most top-level scientists and military officers were observing from a base camp 16 km southwest of the test tower. At 05:29:21 (plus or minus 2 seconds) local time, the gadget exploded with an energy equivalent to around 20 kilotons of TNT. It left a crater of radioactive glass in the desert 3.0 m deep and 340 m wide. At the time of detonation, the surrounding mountains were illuminated “brighter than daytime” for one to two seconds, and the heat was reported as “being as hot as an oven” at the base camp. The roar of the shock wave took 40 seconds to reach the observers. The shock wave was felt over 160 km away, and the mushroom cloud reached 12.1 km in height. 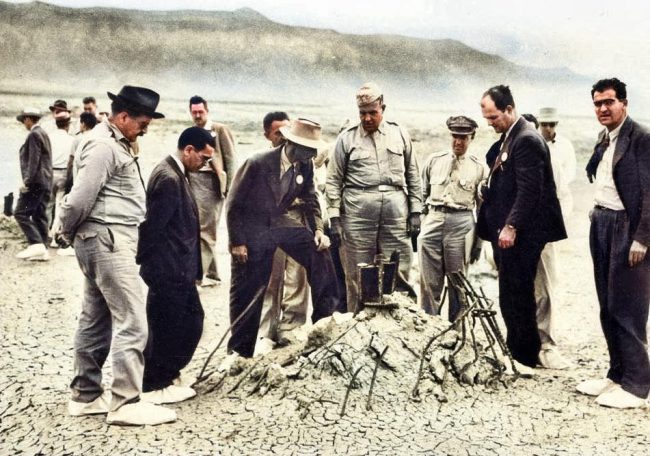 To hide the test, the military reported that it was an explosion in an ammunition depot and did not disclose the true facts until 6 August, the day of the bombing of Hiroshima. Three weeks after the test, on 6 and 9 August 1945, nuclear bombs – one of them based on the Trinity design – were dropped on the Japanese cities of Hiroshima and Nagasaki, killing tens of thousands civilians immediately and many more from radiation exposure later. Trinity was the first of over 2000 nuclear tests to be conducted worldwide, with over 1000 in the U.S. nuclear testing programme alone. The tests released vast amounts of radioactivity around the globe.

The Trinity site was declared a National Historic Landmark in 1975. As it is still located in the middle of the White Sand military area, it is usually cordoned off, but on the first Saturday in April and October it is open to the public. A black obelisk marks the point of the nuclear weapon ignition at which a small amount of residual radiation is still present. In addition, one finds green glass, called trinitite, made of rained down, evaporated sand or rock of the earth’s surface of the test area. The explosion on a tower favored radioactive fallout. Terrain and wind caused radioactive hot spots. Farmers observed mealy fallout for four to five days. Residents within a radius of around 20 kilometres used rainwater as drinking water. There were no warnings to residents, no information on protection options or evacuations. Exposure rates of up to 1.4 µC/kg/s were recorded with unsuitable instruments, whereby the extent of the α radiator contamination by about 4.8 kilograms of unsplit plutonium could hardly be determined. To date, the measurement data of this field trial have not been rigorously evaluated, and dose exposures of the public affected by air, water and food contamination have not been determined.

Where did the Name come from?

The test site was given an alias for safety reasons. Robert Oppenheimer chose the term “Trinity” for this. In 1962, General Groves wrote to Oppenheimer asking whether the origin of the name was that “Trinity” was a common name for rivers and mountains in the western United States. Oppenheimer replied that he had thought of a poem by John Donne when naming it:

He has no further explanation.