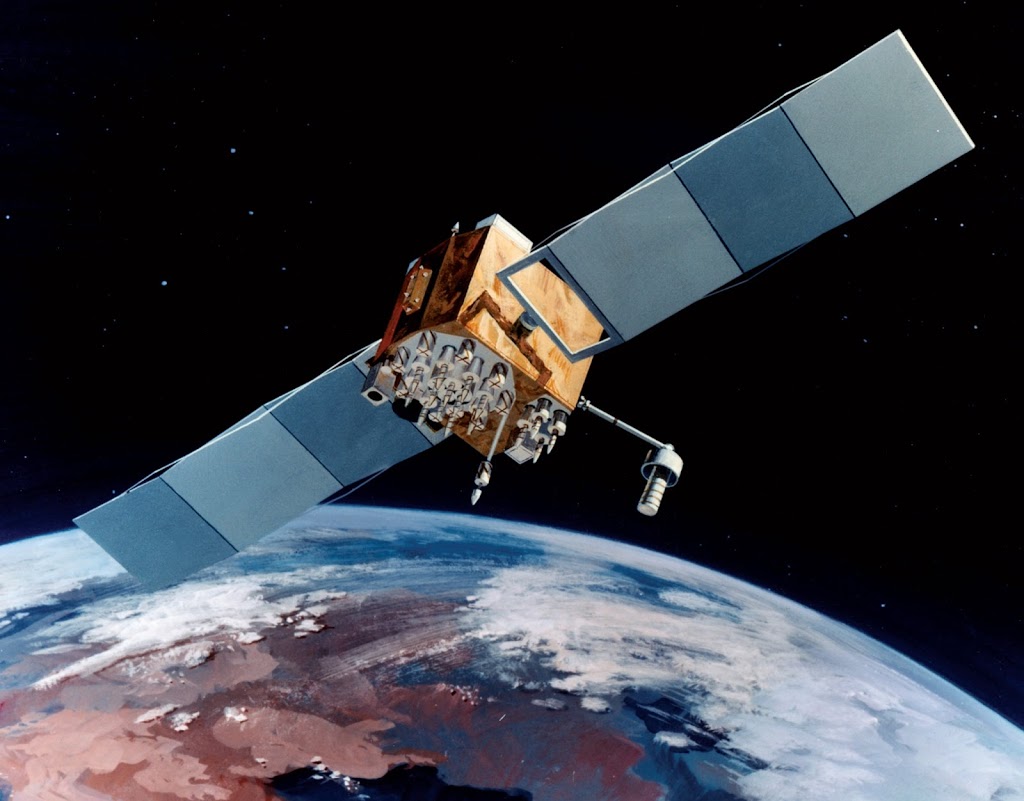 A GPS satellite in orbit.

On July 17, 1995, the Global Positioning System (GPS), the world’s first space-based satellite navigation system is declared operational. GPS provides location and time information in all weather conditions, anywhere on or near the Earth where there is an unobstructed line of sight to four or more GPS satellites.

Navigation is a field of study that focuses on the process of monitoring and controlling the movement of a craft or vehicle from one place to another. In order to do so, you must know your current position. In the European medieval period, navigation was considered part of the set of seven mechanical arts, none of which were used for long voyages across open ocean. Early Pacific Polynesians used the motion of stars, weather, the position of certain wildlife species, or the size of waves to find the path from one island to another. Maritime navigation using scientific instruments such as the mariner’s astrolabe first occurred in the Mediterranean during the Middle Ages. Open-seas navigation using the astrolabe and the compass started during the Age of Discovery in the 15th century [3].

To know, where you are, you need to know your Latitude and Longitude. Roughly, the latitude of a place on Earth is its angular distance north or south of the equator. Mariners calculated latitude in the Northern Hemisphere by sighting the North Star Polaris with a sextant and sight reduction tables to correct for height of eye and atmospheric refraction. The height of Polaris in degrees above the horizon corresponds to the latitude of the observer. Similar to latitude, the longitude of a place on Earth is the angular distance east or west of the prime meridian or Greenwich meridian. For most of history, mariners struggled to determine longitude. Longitude can be calculated if the precise time of a sighting is known. Reliable marine chronometers were unavailable until the late 18th century and not affordable until the 19th century.[6]

Most modern navigation relies primarily on positions determined electronically by receivers collecting information from satellites. The first satellite navigation system was Transit, a system deployed by the US military in the 1960s. Transit’s operation was based on the Doppler effect [4]: the satellites traveled on well-known paths and broadcasted their signals on a well known frequency. The received frequency will differ slightly from the broadcast frequency because of the movement of the satellite with respect to the receiver. By monitoring this frequency shift over a short time interval, the receiver can determine its location to one side or the other of the satellite, and several such measurements combined with a precise knowledge of the satellite’s orbit can fix a particular position. Part of an orbiting satellite’s broadcast included its precise orbital data. Thus, in order to ensure accuracy, the US Naval Observatory (USNO) continuously observed the precise orbits of these satellites.

Modern satellite navigation systems are more direct. The satellite broadcasts a signal that contains orbital data (from which the position of the satellite can be calculated) and the precise time the signal was transmitted. The orbital data is transmitted in a data message that is superimposed on a code that serves as a timing reference. The satellite uses an atomic clock to maintain synchronization of all the satellites in the constellation. The receiver compares the time of broadcast encoded in the transmission with the time of reception measured by an internal clock, thereby measuring the time-of-flight to the satellite. Several such measurements can be made at the same time to different satellites, allowing a continual fix to be generated in real time using an adapted version of trilateration.

The Global Positioning System project was developed in 1973 by the U.S. Department of Defense to overcome the limitations of previous navigation systems. Originally run with 24 satellites in medium altitude orbit (at approximately 20,200 km), GPS became operational in 1994. As of December 2012, there are 32 satellites in the GPS constellation. The additional satellites improve the precision of GPS receiver calculations by providing redundant measurements. While being a top secret military development in the beginning, today GPS has become a common place for almost every smart phone. BTW, GPS is not the only Global Positioning System. Of course also Russia started the development of a satellite navigation system during the time of cold war in the mid 1970s: GLONASS, which became fully operational with a coverage of the entire Russian territory in 2010. Also Europe established an alternative satellite navigation system called GALILEO, which went live in 2016, to gain independency from the U.S. controlled GPS. With 10 satellites also China has established its own satellite navigation system called Beidou, covering Asia and the West Pacific.