You are here: Home › history › The Three Mile Island Accident 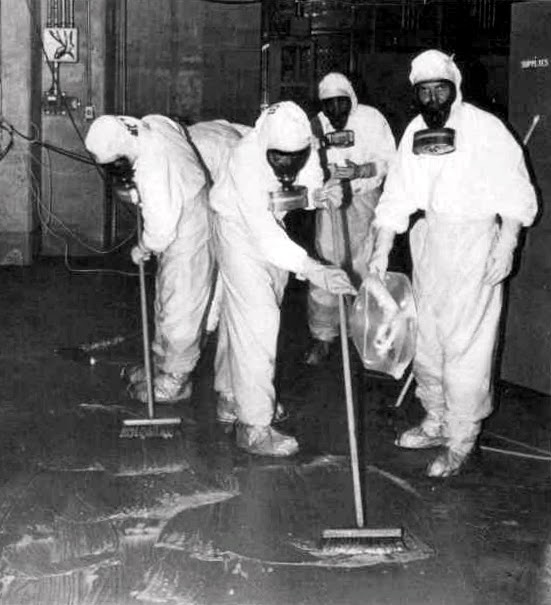 Three Mile Island has got its name because it is located three miles downriver from Middletown, Pennsylvania. The plant was originally built by General Public Utilities Corporation and consists of two separate units. The Three Mile Island Unit 1 is a pressurized water reactor with a net generating capacity of 852 MWe, which first came online on April 19, 1974. TMI-1 is licensed to operate for 40 years from its first run, and in 2009, was extended 20 years, which means it may operate until 2034. The Three Mile Island Unit 2 was also a pressurized water reactor similar to Unit 1. The only difference was that TMI-2 was slightly larger and received its operating license in 1978.

The Day of the Accident

The accident began with failures in the non-nuclear secondary system on March 28, 1979. In the nighttime hours preceding the incident, the TMI-2 reactor was running at 98% of full power, while the companion TMI-1 reactor was shut down for refueling. The initial cause of the accident happened eleven hours earlier, during an attempt by operators to fix a blockage in one of the eight condensate polishers, the sophisticated filters cleaning the secondary loop water. These filters are designed to stop minerals and impurities in the water from accumulating in the steam generators and increasing corrosion rates in the secondary side. With the steam generators no longer receiving feedwater, heat and pressure increased in the reactor coolant system, causing the reactor to perform an emergency shutdown (SCRAM). Within eight seconds, control rods were inserted into the core to halt the nuclear chain reaction. The reactor continued to generate decay heat and, because steam was no longer being used by the turbine, heat was no longer being removed from the reactor’s primary water loop. Once the secondary feedwater pumps stopped, three auxiliary pumps activated automatically. However, because the valves had been closed for routine maintenance, the system was unable to pump any water. 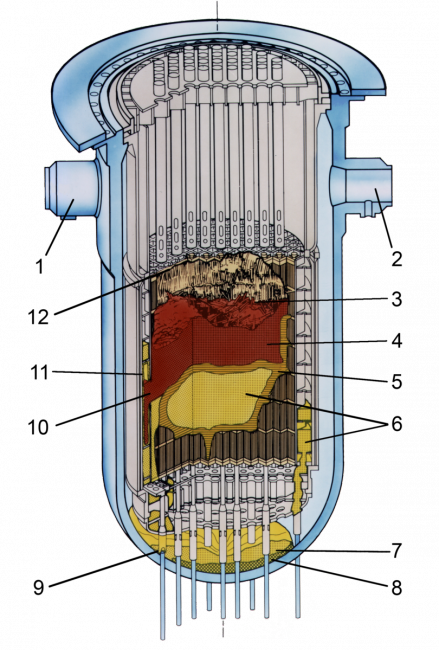 Due to the loss of heat removal from the primary loop and the failure of the auxiliary system to activate, the primary loop pressure began to increase, triggering the pilot-operated relief valve (PORV) at the top of the pressurizer – a pressure active-regulator tank – to open automatically. The relief valve should have closed when the excess pressure had been released, and electric power to the solenoid of the pilot was automatically cut, but the relief valve stuck open due to a mechanical fault. The open valve permitted coolant water to escape from the primary system, and was the principal mechanical cause of the partial meltdown that followed, which allowed large amounts of nuclear reactor coolant to escape. The mechanical failures were compounded by the initial failure of plant operators to recognize the situation as a loss-of-coolant accident due to inadequate training and human factors, such as human-computer interaction design oversights relating to ambiguous control room indicators in the power plant’s user interface. In particular, a hidden indicator light led to an operator manually overriding the automatic emergency cooling system of the reactor because the operator mistakenly believed that there was too much coolant water present in the reactor and causing the steam pressure release.

Three Mile Island Unit 2 was too badly damaged and contaminated to resume operations; the reactor was gradually deactivated and permanently closed. TMI-2 had been online only 13 months but now had a ruined reactor vessel and a containment building that was unsafe to walk in. Cleanup started in August 1979 and officially ended in December 1993, with a total cleanup cost of about $1 billion. The accident crystallized anti-nuclear safety concerns among activists and the general public, resulted in new regulations for the nuclear industry, and has been cited as a contributor to the decline of a new reactor construction program that was already underway in the 1970s. The partial meltdown resulted in the release of unknown amounts of radioactive gases and radioactive iodine into the environment.

Three Mile Island was not the first and should also not be the last nor the severest accident related to nuclear power plants. The incident was rated a five on the seven-point International Nuclear Event Scale: an Accident With Wider Consequences. Two level 7 incidents should follow: Chernobyl and Fukushima, from its consequences we still suffer today. Unfortunately, the generation of nuclear power is not without risks. Natural disasters and human errors cannot be ruled out. Moreover, even if the production should be secure, nobody came up with a suitable longterm solution for nuclear waste up to now.