You are here: Home › physics › Otto Frisch and the Idea of Nuclear Fission 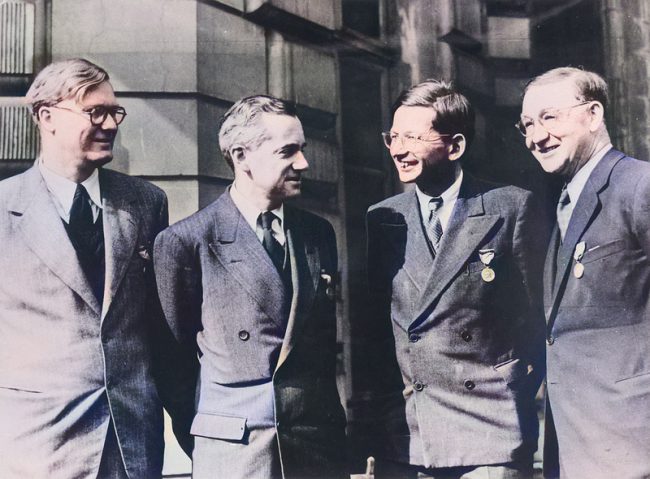 On October 1, 1904, Austrian-British physicist Otto Robert Frisch was born. With his aunt Lise Meitner,[4] Frisch described the division of neutron-bombarded uranium into lighter elements. With his collaborator Rudolf Peierls he designed the first theoretical mechanism for the detonation of an atomic bomb in 1940.

“Scientists have one thing in common with children: curiosity. To be a good scientist you must have kept this trait of childhood, and perhaps it is not easy to retain just one trait. A scientist has to be curious like a child; perhaps one can understand that there are other childish features he hasn’t grown out of.”
— Otto Robert Frisch, What Little I Remember (1979), 86.

Otto Frisch was the son of the painter Justinian Frisch and the concert pianist Auguste Meitner Frisch. Even though Otto was talented in the arts, he was even more enthusiastic about physics, sharing the love with his aunt Lise Meitner. At the University of Vienna, Frisch studied physics and graduated in 1926 with some work on the effect of the newly discovered electron on salts. He later worked under the Nobel Prize-winning scientist Otto Stern in Hamburg, where Frisch produced novel work on the diffraction of atoms and also proved that the magnetic moment of the proton was much larger than had been previously supposed.

Due to the rise of the Nazi Party in Germany, Otto Frisch moved to London joining the staff at Birkbeck College and working with the physicist Patrick Maynard Stuart Blackett on cloud chamber technology and artificial radioactivity. Afterwards, Frisch relocated to Copenhagen to work woth Niels Bohr and thus, specializing in nuclear physics, particularly neutron physics. In 1938, Otto Frisch visited his aunt Lisa Meitner in Kungälv. Meanwhile, Meitner received the news that in Berlin, Otto Hahn and Fritz Strassmann made the discovery that the collision of a neutron with a uranium nucleus produced the element barium as one of its byproducts. In his letter to Lise Meitner, Otto Hahn [5] called this new reaction a “bursting” of the uranium nucleus. Otto Frisch and Lise Meitner then created the hypothesis that the uranium nucleus had split in two. They explained the process, estimated the energy released, and Frisch coined the term fission to describe it. Due to the political tensions, the scientists were forced to publish their findings separately. In Copenhagen, Otto Frisch managed to isolate the fragments produced by fission reactions. As he later described himself, a fundamental idea of the direct experimental proof of the nuclear fission was suggested to him by George Placzek.

In 1939, Frisch wanted to shortly visit Birmingham. Unfortunately, the outbreak of World War II precluded his return to Denmark. Frisch and Rudolf Peierls then produced the Frisch–Peierls memorandum at Birmingham University, which was the first document to set out a process by which an atomic explosion could be generated.  In the process, Uranium-235 would be used, which required a fairly small critical mass and could be made to achieve criticality using conventional explosives to create an immensely powerful detonation. The scientists further also noted the effects of the explosion, from the initial blast to the resulting fallout. The document provided by Otto Frisch and Rudolf Peierls became the basis of the British efforts building an atomic device. The work highly influenced Manhattan Project on which Frisch began to work on as part of the British delegation.

In 1943, Otto Frisch went to the United States and one year later, now working at Los Alamos, Frisch received the task to accurately determine the amount of enriched uranium which would be required to create the critical mass, the mass of uranium which would sustain a nuclear chain reaction and Frisch determined the masses of uranium required to fire the Little Boy bomb over Hiroshima. Shortly after World War II, Otto Frisch returned to England in order to take up the post of head of the nuclear physics division of the Atomic Energy Research Establishment at Harwell, though he also spent much of the next thirty years teaching at Cambridge where he was Jacksonian Professor of Natural Philosophy and a fellow of Trinity College.

Before retiring, Otto Frisch designed SWEEPNIK, a device used to measure tracks in bubble chambers with the help of a laser and a computer. He also founded the company Laser-Scan Limited, now known as 1Spatial. He retired from the chair in 1972 as required by University regulations. Otto Frisch died on 22 September 1979 at age 74.