On July 24, 1837, watercolour artist and amateur scientist Robert Cocking died in an early aviation accident. Cocking was the first person to be killed in a parachuting accident. Following Cocking’s accident parachuting became unpopular, and was confined to carnival and circus acts until the late 19th century when developments such as the harness and breakaway chutes made it safer.

A Watercolor Artist with Enthusiasm for Science

Robert Cocking as a watercolor artist who had also developed an enthusiasm for science. He had probably witnessed André-Jacques Garnerin [5] making his first parachute jump in England in 1802 and was inspired to develop an improved design after reading Sir George Cayley’s paper On Aerial Navigation.[4] George Cayley’s paper published in 1809–1810, discussed Garnerin’s jump. Cocking had used an umbrella-shaped parachute which had swayed excessively from side-to-side during the descent. Cayley assumed that a cone-shaped parachute would be more stable. Cocking spent many years developing his improved parachute, based on Cayley’s design, which consisted of an inverted cone of 32.61 m in circumference connected by three hoops. Cocking asked Charles Green and Edward Spencer, owners of the balloon Royal Nassau, to allow him an opportunity to test his invention. Despite the fact that Cocking was 61 years old, was not a professional scientist, and had no parachuting experience, the owners of the balloon agreed and advertised the event as the main attraction of a Grand Day Fete at Vauxhall Gardens. 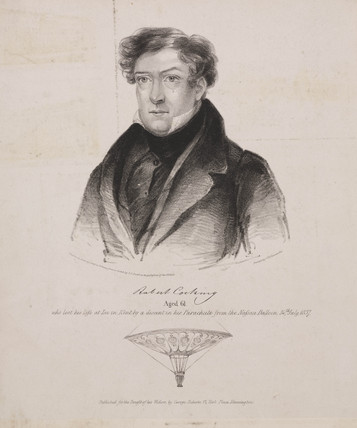 On July 24, 1837, Robert Cocking ascended hanging below the balloon, which was piloted by Green and Spencer. His parachute was decorated by the artist E. W. Cocks. Cocking was in a basket which hung below the parachute which in turn hung below the basket of the balloon, hoping to reach 8000 feet (2.400m). However the balloon’s and parachute’s weight was too large. At 1.500m, the balloon was located nearly over Greenwich and Green informed Cocking that he would be unable to rise any higher if the attempt was to be made in daylight. Faced with this information, Cocking released the parachute.

The large crowd witnessing Cockings parachuting attempt immediately found out that Cocking was in trouble. In his calculations, Cocking did not include the weight of theparachute itself. As a result, the descent was too quick. Though rapid, the descent continued evenly for a few seconds, but then the entire apparatus turned inside out and plunged downwards with increasing speed. The parachute broke up before it hit the ground and at about 60 to 90 m off the ground the basket detached from the remains of the canopy. Cocking was killed instantly in the crash. His body was found in a field in Lee. Initially Cayley was blamed for the failure of the parachute, but tests later revealed that although Cayley had neglected to mention the additional weight of the parachute in his paper, the cause of the crash had been a combination of the parachute’s weight and its flimsy construction, in particular the weak stitching connecting the fabric to the hoops. However, later tests by the American balloonist John Wise showed that Cocking’s design would have been successful if only it had been larger and better constructed. The problem of pendulum movements, which first occurred with Garnerin’s parachute, was later solved by installing a vertex opening at the top of the parachute.

Robert Cocking’s death made skydiving unpopular and limited it to circus and carnival events until the 19th century.