You are here: Home › philosophy › Thomas Kuhn and the Structure of Scientific Revolutions 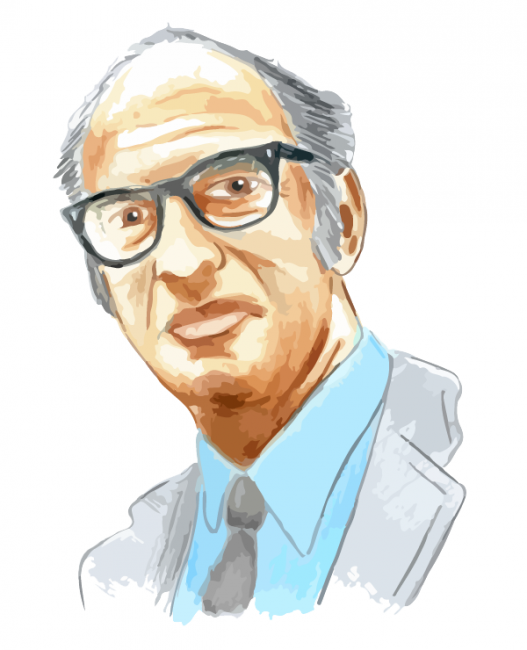 On July 18, 1922, American physicist, historian, and philosopher of science Thomas Samuel Kuhn was born. He is most famous for his controversial 1962 book The Structure of Scientific Revolutions, which was influential in both academic and popular circles, introducing the term “paradigm shift“, which has since become an English-language idiom.

“Only when they must choose between competing theories do scientists behave like philosophers.”
— Thomas Kuhn, Logic of Discovery or Psychology of Research? (1970)

Kuhn was born in Cincinnati, Ohio, to Samuel L. Kuhn, who was trained as a hydraulic engineer at Harvard University and the Massachusetts Institute of Technology (MIT), and his wife Minette. He attended the Hessian Hills School in Croton-on-Hudson, New York, a liberal school that encouraged students to think independently, and graduated from The Taft School in Watertown, CT, in 1940, where he became aware of his serious interest in mathematics and physics. He obtained his B.S. degree in physics from Harvard University in 1943 with summa cum laude. After graduation, he worked on radar for the Radio Research Laboratory at Harvard and later for the U.S. Office of Scientific Research and Development in Europe. He returned to Harvard at the end of the war, obtained his master’s degree in physics in 1946, and worked toward a PhD degree in the same department, which he obtained in 1949 under the supervision of John Van Vleck. According to his autobiographical notes, his three years of total academic freedom as a Harvard Junior Fellow were crucial in allowing him to switch from physics to the history and philosophy of science.

“Out-of-date theories are not in principle unscientific because they have been discarded. That choice, however, makes it difficult to see scientific development as a process of accretion.”
— Thomas Kuhn, The Structure of Scientific Revolutions (1962)

Seeing through the Eyes of the Author

From 1948 to 1956, Kuhn taught a course in the history of science at Harvard at the suggestion of university president James Conant. His encounter with classical texts, especially Aristotle’s Physics, was a crucial experience for him. He realized that it was a great mistake to read and judge an ancient scientific text from the perspective of current science and that one could not really understand it unless one got inside the mind of its author and saw the world through his eyes, through the conceptual framework he employed to describe phenomena. This understanding shaped his later historical and philosophical studies.[2]

“Scientific revolutions are inaugurated by a growing sense… that an existing paradigm has ceased to function adequately in the exploration of an aspect of nature to which that paradigm itself had previously led the way.”
— Thomas Kuhn, The Structure of Scientific Revolutions (1962)

The History of Science

This led Kuhn to concentrate on history of science and in due course he was appointed to an assistant professorship in general education and the history of science. During this period his work focussed on eighteenth century matter theory and the early history of thermodynamics. Kuhn then turned to the history of astronomy, and in 1957 he published his first book, The Copernican Revolution.[3] After leaving Harvard, Kuhn taught at the University of California, Berkeley, in both the philosophy department and the history department, being named Professor of the History of Science in 1961. Kuhn interviewed and tape recorded Danish physicist Niels Bohr the day before Bohr’s death.[4] At Berkeley, he wrote and published (in 1962) his best known and most influential work: The Structure of Scientific Revolutions. In 1964, he joined Princeton University as the M. Taylor Pyne Professor of Philosophy and History of Science. He served as the president of the History of Science Society from 1969-70. In 1979 he joined the Massachusetts Institute of Technology (MIT) as the Laurance S. Rockefeller Professor of Philosophy, remaining there until 1991. In 1994 Kuhn was diagnosed with lung cancer. He died in 1996 in Cambridge, Massachussetts, at age 73.[8]

The Structure of Scientific Revolutions

The central idea of his extraordinarily influential — and controversial — book The Structure of Scientific Revolutions is that the development of science is driven, in normal periods of science, by adherence to what Kuhn called a ‘paradigm’. The functions of a paradigm are to supply puzzles for scientists to solve and to provide the tools for their solution. A crisis in science arises when confidence is lost in the ability of the paradigm to solve particularly worrying puzzles called ‘anomalies’. Crisis is followed by a scientific revolution if the existing paradigm is superseded by a rival. Kuhn claimed that science guided by one paradigm would be ‘incommensurable’ with science developed under a different paradigm, by which is meant that there is no common measure for assessing the different scientific theories.[3]

The enormous impact of Kuhn’s work can be measured in the changes it brought about in the vocabulary of the philosophy of science: besides “paradigm shift“, Kuhn popularized the word “paradigm” itself from a term used in certain forms of linguistics and the work of Georg Lichtenberg to its current broader meaning,[5] coined the term “normal science” to refer to the relatively routine, day-to-day work of scientists working within a paradigm, and was largely responsible for the use of the term “scientific revolutions” in the plural, taking place at widely different periods of time and in different disciplines, as opposed to a single “Scientific Revolution” in the late Renaissance. The frequent use of the phrase “paradigm shift” has made scientists more aware of and in many cases more receptive to paradigm changes, so that Kuhn’s analysis of the evolution of scientific views has by itself influenced that evolution.

The Process of Scientific Change

Kuhn explains the process of scientific change as the result of various phases of paradigm change.

The Structure of Scientific Revolutions is one of the most cited academic books of all time. Kuhn’s contribution to the philosophy of science marked not only a break with several key positivist doctrines, but also inaugurated a new style of philosophy of science that brought it closer to the history of science. Years after the publication of The Structure of Scientific Revolutions, Kuhn dropped the concept of a paradigm and began to focus on the semantic aspects of scientific theories. In particular, Kuhn focuses on the taxonomic structure of scientific kind terms. As a consequence, a scientific revolution is not defined as a ‘change of paradigm’ anymore, but rather as a change in the taxonomic structure of the theoretical language of science