You are here: Home › art › Jacopo Peri and the Birth of Early Opera 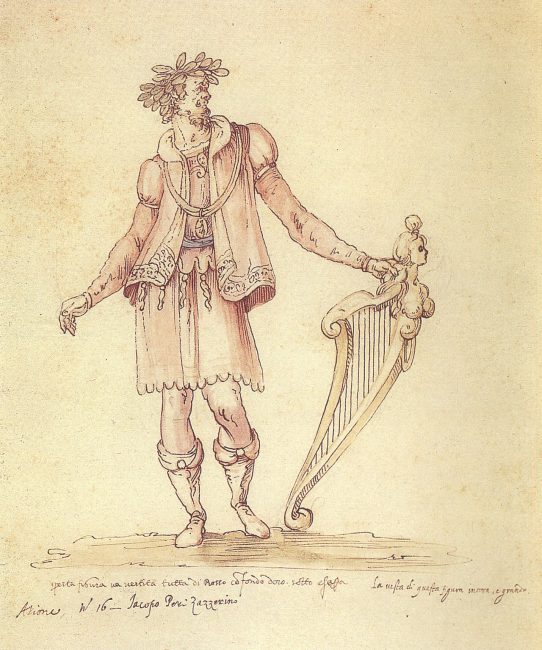 On October 6, 1600, Jacopo Peri‘s opera Euridice was performed for the first time, being created for the marriage of King Henry IV of France and Maria de Medici. The composition is typically considered to be the second work of modern opera, and the first such musical drama to survive to the present day.

“To hear him sing his works composed with excellent skill… induced every heart of stone to tears.”
– Severo Bonini about Jacopo Peri

Jacopo Peri was born in Rome. Peri received his first musical lessons from Cristofano Malvezzi. Soon he was known as a good singer and organist, so that he was invited by many nobles to festivals and performances. In 1587 he was hired by the Medici princely family. In 1591 Peri became Kapellmeister, direttore della musia e di Musiche. He was so much appreciated here at court that he soon had to fulfill special missions. Peri’s earliest works were incidental music for plays, intermedi and madrigals.

The Music of the Renaissance

Peri’s time was that of the newly emerging monody and the incipient basso continuo music. The new form of accompaniment of the singing by a bass instrument (keyboard and lute instruments) gave a firm support to the monodic singing, which focused on the word and its meaning (in contrast to the choral polyphony, which was perceived as overflowing) in a more understandable way. In the house of Count Giovanni de’ Bardi from the family of the Florentine Counts of Vernio, this new music was especially cultivated. The music-loving Bardi was particularly interested in antiquity, his attention was focused on the tragedies of antiquity. His house became the center of fruitful studies, especially in musical matters. Noblemen, poets and musicians met here; a select circle was born, which called itself Camerata Fiorentina. Jacopo Peri also belonged to this circle. In the manner of the learned societies of the time, they conducted art-philosophical discussions, and from these emerged decisive suggestions and attempts to revive the lost style of ancient tragedy. Efforts to renew ancient music were in the air: the reprinting of the ancient theorists had already aroused interest towards the end of the 16th century.

In the 1590s, Jacobo Peri became associated with Jacopo Corsi, the local leading patron of music. They believed contemporary art was inferior to classical Greek and Roman works, and decided to attempt to recreate Greek tragedy, as they understood it. Their work added to that of the Florentine Camerata of the previous decade, which had produced the first experiments in monody, which eventually developed into recitative and aria. They knew that Greek drama was connected with music and they knew that this music had been unanimous. So what could be more obvious than to combine the ancient fabrics with the new monody? In the end, that was the core of what they did. But out of this attempt, out of an experiment in other words, a new art form had emerged – opera. Later, they brought in the poet Ottavio Rinuccini who was asked to write a text. The result was the famous work ‘Dafne‘, which is on this day often referred to as the first work in a new form, opera. The music to this opera has been lost. Two fragments of a transcription exist in the library of the Brussels Conservatory of Music.

Next, Rinuccini and Peri collaborated on Euridice, which was probably first performed on 6 October 1600 at the Palazzo Pitti for the pompous wedding of Henry IV of France with Princess Maria de’ Medici. Unlike Dafne, it has survived to the present day. The work made use of recitatives, a new development which went between the arias and choruses and served to move the action along. Jacopo Peri invented the stile recitativo or cantar recitando: the recitative, which together with the aria became the main component of Italian Baroque opera. He explains this “close-to-language singing style” in the printed score of his Euridice, pointing to the (presumed) technique of the Greeks and Romans in reciting their tragedies. They had raised the “melody of ordinary speech” [the pitch] in such a way that it took on a “middle ground” between singing and speaking.

Peri introduced further operas, often collaborating with other composers and wrote a number of other pieces for various court entertainments. Few of his pieces are still performed today, and even by the time of his death his operatic style was looking rather old-fashioned when compared to the work of relatively younger reformist composers such as Claudio Monteverdi. Peri’s influence on those later composers, however, was large. From then on, Florence’s opera quickly spread throughout Italy and Europe, and would retain its importance for more than three hundred years. In creating the music for Euridice, Peri envisioned a vocal style that is half sung and half spoken.The work has established in opera the dual resource of aria and recitative, and it explores the use of solo, ensemble and choral singing. With Euridice composer Jacopo Peri managed to establish sound principles for operatic composition.