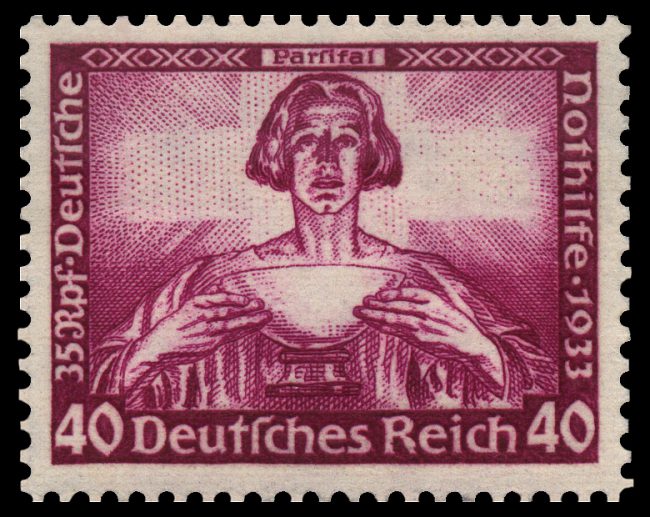 On July 26, 1882, Richard Wagner‘s last opera ‘Parsifal‘ premiered in the Festspielhaus at Bayreuth. Wagner described Parsifal not as an opera, but as “ein Bühnenweihfestspiel” (“A Festival Play for the Consecration of the Stage“). Initially, according to Wagner‘s will, Parsifal should only be allowed to be played at Bayreuth, because he wanted to prevent it from degenerating into ‘mere amusement‘ for an opera-going public. Wagner‘s compositions, particularly those of his later period, are notable for their complex textures, rich harmonies and orchestration.[4]

“I am writing Parsifal only for my wife — if I had to depend on the German spirit, I should have nothing more to say.”
– Cosima Wagner’s Diaries (1978)

Richard Wagner’s last opera is loosely based on Parzival by Wolfram von Eschenbach, a 13th-century epic poem of the Arthurian knight Parzival (Percival) and his quest for the Holy Grail. Already 35 years before the opera premiered, Wagner first read von Eschenbach’s poem Parzival in 1845 while taking the waters at Marienbad. After encountering Arthur Schopenhauer‘s writings in 1854 Wagner became interested in oriental philosophies, especially Buddhism.[5] He even wrote a sketch Die Sieger (The Victors, 1856) for an opera based on a story from the life of Buddha with themes, which were later explored in Parsifal like self-renouncing, reincarnation, compassion, and even exclusive social groups. According to his own account, Wagner conceived Parsifal on Good Friday morning, April 1857, in the Asyl, i.e. the small cottage on his patron’s Otto Wesendonck’s estate near Zürich. Wagner did not resume work on Parsifal for eight years, during which time he completed Tristan und Isolde and began Die Meistersinger von Nürnberg. Then, between 27 and 30 August 1865, he took up Parsifal again and made a prose draft of the work.

But once again the work was dropped and set aside for another eleven and a half years. During this time most of Wagner’s creative energy was devoted to the Ring cycle, which was finally completed in 1874. Only when this gargantuan task had been accomplished did Wagner find the time to concentrate on Parsifal. By 23 February 1877 he had completed a second and more extensive prose draft of the work, and by 19 April of the same year he had transformed this into a verse libretto. In September 1877 he began the music by making two complete drafts of the score from beginning to end.

Many of Wagner’s operas are driven by rebellious sexual passion, as e.g. in Tristan and Isolde (1859), the title characters defy moral and musical conventions in pursuit of erotic nirvana, or in the Ring Cycle, when in Die Walküre (1870), brother and sister Siegmund and Sieglinde fall in love. In Parsifal sexual passion must be confronted and surpassed – and thus transfigured into a universal compassionate love.[1] In Parsifal, Christian knights in Spain guard two special relics in their castle Monsalvat: the Holy Grail and the Holy Spear that pierced Jesus on the cross. The knights have been in trouble since their leader Amfortas decided to attack a nearby sorcerer’s lair armed with the spear. The malevolent magician named Klingsor, was a would-be knight who after rejection from the order castrated himself in a rage. His servant, Kundry, a shape-shifting sorceress, seduced Amfortas allowing Klingsor to steal the holy spear and stab him for good measure.[1] The wound, which has never healed—both straining him physically and signifying his moral failing—leaves Amfortas a weakened ruler unable to lead the brotherhood, which, asa result, is threatened with collapse from within and is menaced from without.[3] 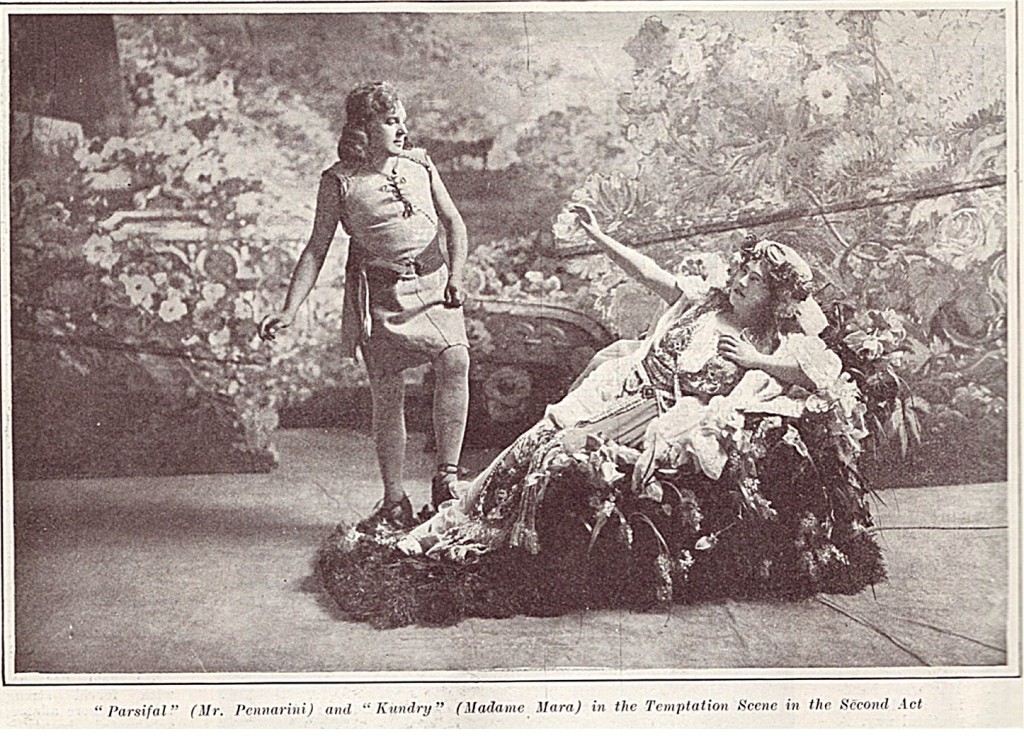 Winning Back the Spear

Only a man made wise by compassion can save Amfortas, and this should be (sic!) Parsifal. Parsifal has defiled the castle by shooting a swan and seems to have as little interest in what happens around him as he does in his own past. But in witnessing Amfortas’ agony during the Grail ceremony in the castle, Parsifal feels a compulsive pain in his own heart and his sympathy is stirred. Parsifal travels to Klingsor’s castle on the southern slope of the same mountains of Monsalvat, which looks towards Moorish Spain. There he must defy the temptations of the flower-maidens and Kundry, who is cursed to wander the earth for laughing at Jesus on the Via Dolorosa. Parsifal must win back the spear and heal the order.[1] Parsifal, the pure fool, is made cosmically clear-sighted by Kundry’s kiss. He feels in himself the temptation, the longing and suffering of Amfortas, and perceives the world as the aggregation of common guilt and an unending circle of misery, which can be broken only by compassion and renunciation, by rejection of the will and its blind urging and compulsion.[2]

When in the end Amfortas commands his knights to kill him and end his suffering and the shame he has brought on the Knighthood, Parsifal steps forth and says that only one weapon can heal the wound. He touches Amfortas’ side with the Holy Spear and both heals and absolves him. When the Grail is unveiled, Kundry, released from her curse, sinks lifeless to the ground as a white dove descends and hovers above Parsifal.

Since Parsifal could initially only be seen at the Bayreuth Festival, the first presentation in 1882 was attended by many notable figures. Reaction was varied. Some thought that Parsifal marked a weakening of Wagner’s abilities. In the course of its history, Parsifal has been both influential and controversial. The use of Christian symbols in Parsifal together with its restriction to Bayreuth for almost 30 years sometimes led to performances being regarded almost as a religious rite. Famous philosopher Friedrich Nietzsche, who was originally one of Wagner’s champions, chose to use Parsifal as the grounds for his breach with Wagner. He wrote

“Parsifal is a work of perfidy, of vindictiveness, of a secret attempt to poison the presuppositions of life – a bad work. The preaching of chastity remains an incitement to anti-nature: I despise everyone who does not experience Parsifal as an attempted assassination of basic ethics.” (Friedrich Nietzsche, from Nietzsche contra Wagner, 1895)

But the Music is Sublime

Despite this attack on the subject matter, he also admitted that the music was sublime. Some writers see in the opera the promotion of racism or anti-semitism. Parsifal is proposed as the “pure-blooded” (i.e. Aryan) hero who overcomes Klingsor, who is perceived as a Jewish stereotype, particularly since he opposes the quasi-Christian Knights of the Grail.