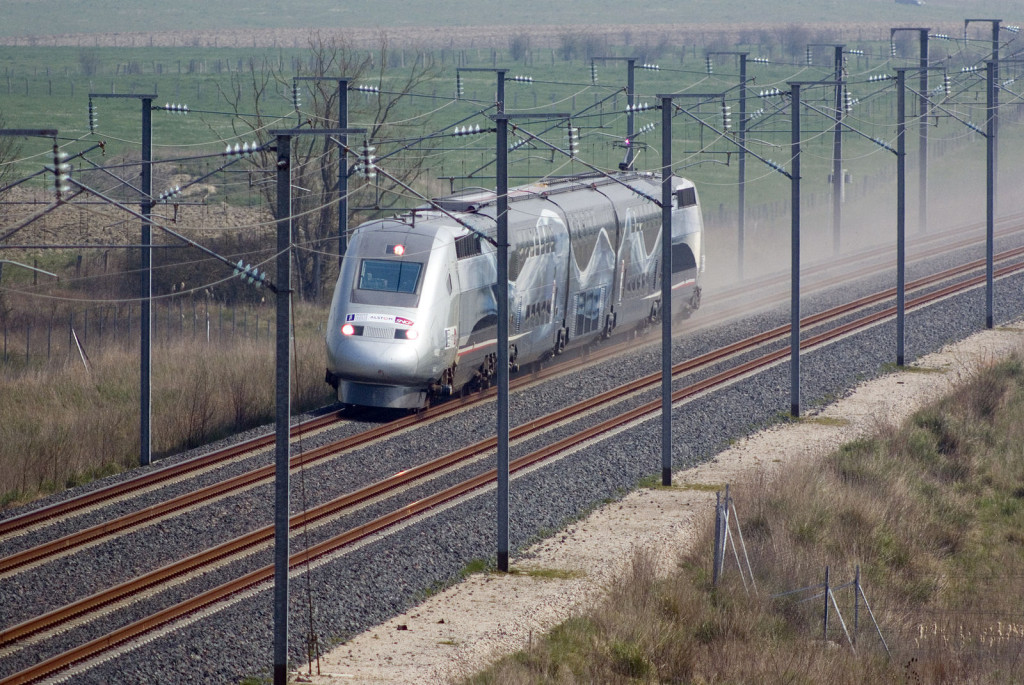 On April 3, 2007, the French V150, a specially configured TGV high-speed train, broke the world land speed record for conventional railed trains and reached a speed of 574.8 kilometres per hour (357.2 mph) on an unopened section of the LGV Est between Strasbourg and Paris, in France.

The 150 in V150 refers to a target speed in metres per second. It was a series of high speed trials carried out on the LGV Est prior to its June 2007 opening. Following a series of increasingly high speed runs, the official speed record attempt took place on 3 April 2007. The top speed of 574.8 km/h was reached at kilometer point 191 near Le Chemin. The 515.3 km/h speed record of 1990 was unofficially broken multiple times during the test campaign, the last time was on 15 April 2007 with a speed of 542.9 kilometres per hour.

The train had four more powered axles than trainset 325 used in the 1990 speed record, and had a maximum power output of 19.6 MW (26,300 hp) instead of the 9.3 MW (12,500 hp) on a standard TGV POS. This unusual composition was used to obtain high speed test data on disparate technical elements including the new asynchronous traction motors on the POS power cars, the lightweight synchronous permanent magnet traction motors on the AGV bogies, the actively controlled pantograph, and the Duplex bi-level configuration which had never been used in very high speed trials.

The train’s aerodynamic improvements were refined in a wind tunnel and provided a 15% reduction in drag from the standard configuration. The improvements included a front air dam, roof fairings over the pantograph openings, membranes to cover the space between the cars, and a flush-mounted windshield.

Chased by an Airplane

The train accelerated over a distance of 70 kilometres. During certain runs, including the official record run, the V150 train was chased by an Aérospatiale Corvette airplane to provide data relay and uplink of live television images. After the record trip on April 3, 2007, trips with speeds of at least 520 km/h followed almost every day until April 15, 2007. A total speed of 500 km/h or more was achieved over a length of more than 700 kilometres. At least 450 km/h was the speed of the record train to a total of 3200 km. At the same time, however, the record train remained below the record for track-bound vehicles set in April 2015 by the Japanese magnetic levitation train Shinkansen L0 series at 603 km/h.