You are here: Home › physics › Edwin McMillan and his Research on Transuranium Elements 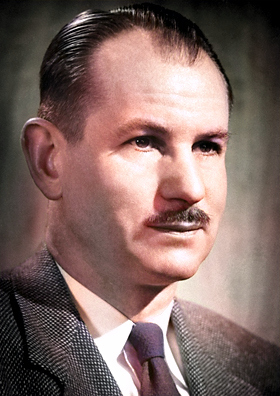 On September 18, 1907, American physicist and Nobel Laureate Edwin Mattison McMillan was born. McMillan is credited with being the first ever to produce a transuranium element, neptunium. For this, he shared the Nobel Prize in Chemistry with Glenn Seaborg in 1951.

Edwin McMillan, the son of physicist Dr. Edwin Harbaugh McMillan and his wife Anne Marie McMillan, née Mattison, grew up in Pasadena, California. He entered the California Institute of Technology (Caltech) in 1924. There, McMillan took part in a research project with Linus Pauling [4] as an undergraduate, in 1929, McMillan received his Master of Science degree degree. In 1933, Edwin McMillan earned his Doctor of Philosophy at Princeton University under the supervidion of Edward Condon with a thesis on the deflection of a beam of HCI molecules in a non-homogeneous electric field. In the same year, he started his Post-Doc studies at the Ernest Lawrence Institute at the University of California, Berkeley. There he spent two years measuring the magnetic momentum of protons using the particle beam method. After another year he moved to the Berkeley Radiation Laboratory, where he worked at Ernest Lawrence, where he studied nuclear reactions and their decay products, and was also involved in the development of the cyclotron. [5]

Working on the Cyclotron

Edwin McMillan later became part of the effort and helped to adjust the cyclotron to produce a homogeneous magnetic field. Along with Robert Thornton, McMillan conducted cyclotron experiments with deuteron beams which fused with a target nuclei, transmuting the target to a heavier isotope while ejecting a proton. These experiments indicated a nuclear interaction at lower energies than would be expected from a simple calculation of the Coulomb barrier between a deuteron and a target nucleus. Robert Oppenheimer and Melba Phillips then initiated the Oppenheimer–Phillips process to explain the phenomenon. Edwin McMillan became an assistant Professor in 1936, and an associate Professor in 1941.[6]

Edwin McMillan and Emilio Segrè [8] began working on the problem. When reacting it with hydrogen fluoride with a strong oxidizing agent present, it behaved like members of the rare earth elements. In a new experiment, McMillan tried subjecting the unknown substance to HF in the presence of a reducing agent, something he had not done before. In 1940, Philip Abelson began collaborating on the problem. He observed that the element was more similar to uranium. McMillan and Abelson prepared a much larger sample of bombarded uranium that had a prominent 23-minute half-life from 239U and demonstrated conclusively that the unknown 2.3-day half-life increased in strength in concert with a decrease in the 23-minute activity.

During the Second World War he worked on military projects such as radar, sonar and nuclear weapons, and from November 1942 he worked with Robert Oppenheimer in the Los Alamos Laboratory. After the Second World War, i.e. from 1945, he developed and built the first electron synchrotron. From 1958 to 1973 he was head of the Lawrence Radiation Laboratory at the University of California.

They proved that the the unknown radioactive source originated from the decay of uranium and, coupled with the previous observation that the source was different chemically from all known elements, proved beyond all doubt that a new element had been discovered. McMillan and Abelson published their results in a paper entitled Radioactive Element 93 in the Physical Review. Soon, they decided on neptunium. In 1951, McMillan shared the Nobel Prize in Chemistry with Seaborg “for their discoveries in the chemistry of the transuranium elements“.

After his retirement from the faculty at Berkeley in 1974, he spent 1974–75 at CERN, where he worked on the g minus 2 experiment to measure the magnetic moment of the muon. He was awarded the National Medal of Science in 1990. McMillan suffered the first of a series of strokes in 1984. He died at his home in El Cerrito, California, from complications from diabetes on September 7, 1991, at age 83.