You are here: Home › cinematography › Anamorphic Lenses and the Birth of CinemaScope Widescreen Cinema

CinemaScope logo from The High and the Mighty (1954).

On September 16, 1953, American Biblical epic film The Robe premiered, the very first film released in the widescreen process CinemaScope. Like other early CinemaScope films, The Robe was shot with Henri Chrétien’s original Hypergonar anamorphic lenses. The film marked the beginning of the modern anamorphic format in both principal photography and movie projection.

The basis for CinemaScope was probably formed by the French inventor Henri Chrétien who developed and patented a film process that he called Anamorphoscope in 1926. Back then, Chrétien employed an optical trick which produced an image twice as wide as those that were being produced with conventional lenses. The optical system called Hypergonar, which compressed and dilated the image laterally. With the help of an optical system that produces different magnifications in two directions perpendicular to each other, a distorted image is created, which is called anamorphic. 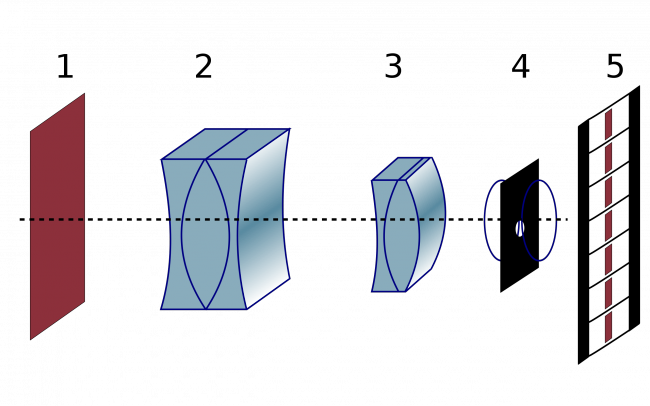 An anamorphic photograph consists of at least three cylindrical lenses, two cylindrical mirrors or a prism system. Thus the optically generated image is stretched or compressed in one direction relative to the other. Usually, however, a single optical element of this kind is not sufficient, since the sharp image planes for both the horizontal and vertical planes must both lie in the film plane.

The Development of CinemaScope

In the 1950s, cinema got a new competitor: television. However, Spyros Skouras, the head of Twentieth Century-Fox, that technical innovation could help to meet the challenge. Fox’s research department was advised to find a new projection system at modest cost. Herbert Brag then remembered the work by Henri Chrétien. The optical company Bausch & Lomb was asked to produce a prototype anamorophic lens. Fox further purchased the existing Hypergonars from Chrétien and after some test screenings, Fox gave their go for further widescreen developments, which later became known as CinemaScope.

Twentieth Century-Fox’s pre-production of The Robe, originally committed to Technicolor Three-Strip origination, was halted so that the film could be changed to a CinemaScope production. Chrétien’s Hypergonars proved to have significant optical and operational defects, but Bausch & Lomb, Fox’s prime contractor for the production of these lenses, initially produced an improved “Chrétien-formula” adapter lens design, and subsequently produced a dramatically improved and patented “Bausch & Lomb formula” adapter lens design. Ultimately “Bausch & Lomb formula” “combined” lens designs incorporated both the “prime” lens and the anamorphic lens in one unit. These lenses continue to be used to this day, particularly in special effects units. Other manufacturers’ lenses are often preferred for so-called “production” applications that benefit from significantly lighter weight or lower distortion, or a combination of both characteristics. 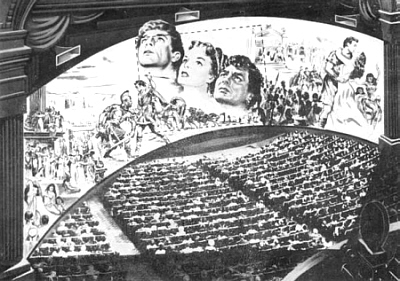 A promotional picture advertising The Robe and CinemaScope

CinemaScope and its Rivals

CinemaScope itself was a response to early “realism” processes Cinerama and 3-D. Cinerama was relatively unaffected by CinemaScope, as it was a quality-controlled process that played in select venues, similar to the IMAX films of recent years. 3-D was hurt, however, by studio advertising surrounding CinemaScope’s promise that it was the “miracle you see without glasses.” Technical difficulties in presentation spelled the true end for 3-D, but studio hype was quick to hail it a “victory” for CinemaScope.

The Triumph of CinemaScope

The production and projection of films with HiFi multi-channel sound for wide-screen presentation using the CinemaScope process was relatively inexpensive, since the 35 mm film material could also be used with normal camera and projector technology established in cinemas. Only the anamorphoscope had to be presented. By 1955, more than 60% of all cinemas in the United States were technically capable of showing CinemaScope films. However, the CinemaScope brand was also particularly widespread because 20th Century Fox also licensed the brand to other major film companies such as MGM, Columbia, Disney and Universal, especially in the 1950s and 1960s.

The Decline of CinemaScope

Especially from the 1960s onwards, the licensing policy changed. The film companies gave up their own camera technology departments and new camera manufacturers such as Panavision offered the film companies their anamorphic recording optics with cameras. As a result, the use of the CinemaScope brand declined and compatible films with new names of different film companies appeared in the cinemas.