You are here: Home › mathematics › Sophus Lie and the Theory of Continuous Symmetry 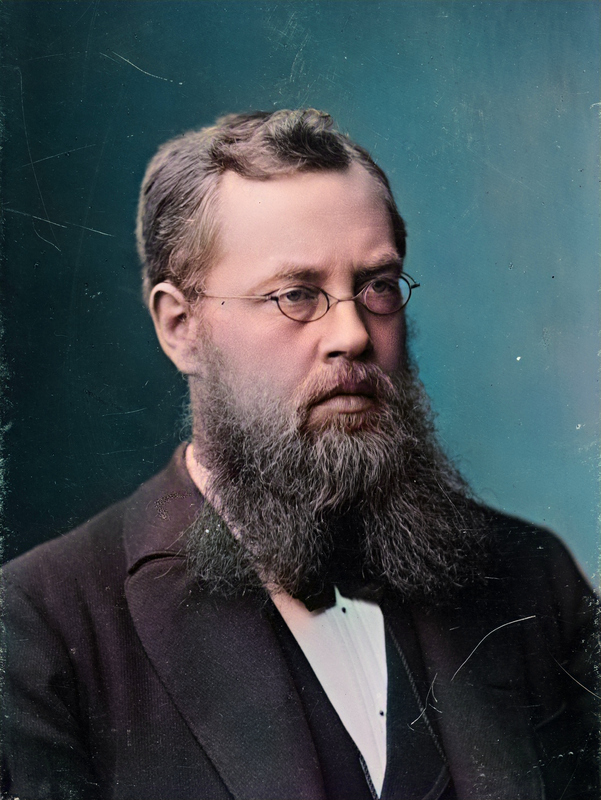 On December 17, 1842, Norwegian mathematician Sophus Lie was born. Lie largely created the theory of continuous symmetry and applied it to the study of geometry and differential equations. He made significant contributions to the theories of algebraic invariants, continuous groups of transformations and differential equations. Lie groups and Lie algebras are named after him.

Marius Sophus Lie was born in Nordfjordeid, near Bergen, Norway, to his father Johann Lie, pastor in Moss am Kristianiafjord, and his wife Mette Stabell, the daughter of a chief customs officer. His parents had six children and Sophus was the youngest of the six. Sophus first attended school in the town of Moss, which is a port in south-eastern Norway, on the eastern side of the Oslo Fjord. In 1857 he entered Nissen’s Private Latin School in Christiania (today’s Oslo), where he decided to take up a military career, but his eyesight was not sufficiently good so he gave up the idea and entered University of Christiania in 1859. Lie studied natural sciences from 1859 to 1865 and in 1862 he attended lectures on group theory with Peter Ludwig Mejdell Sylow, a Norwegian mathematician who wrote fundamental work on group theory. In 1865 he passed the examination as a real teacher in 1865 and was initially indecisive about his further career. The one thing he knew he wanted was an academic career and he thought for a while that astronomy might be the right topic. He learnt some mechanics, wondered whether botany or zoology or physics might be the right subjects and in general became rather confused. However, there are signs that from 1866 he began to read more and more mathematics and the library records in the University of Christiania show clearly that his interests were steadily turning in that direction.[1]

Mathematics in Berlin and Paris

His first mathematical work, Repräsentation der Imaginären der Plangeometrie, was published, in 1869, by the Academy of Sciences in Christiania and also by Crelle’s Journal. That same year he received a scholarship and traveled to Berlin, where he stayed from September to February 1870. In Berlin he met Kronecker, Kummer and Weierstrass. Lie was not attracted to the style of Weierstrass’s mathematics which dominated Berlin. However, in Berlin he also met German mathematician Felix Klein and they became close friends.[3] When he left Berlin, Lie traveled to Paris, where he was joined by Klein two months later. There, they met Camille Jordan,[2] known both for his foundational work in group theory and for his influential Cours d’analyse, and Gaston Darboux, the biographer of Henri Poincaré and editor of the Selected Works of Joseph Fourier. While in Paris Lie discovered contact transformations. These transformations allowed a 1-1 correspondence between lines and spheres in such a way that tangent spheres correspond to intersecting lines.[1] But with the outbreak of the 1870 Franco-Prussian War, Klein, who was Prussian, had to leave France very quickly. Lie left for Fontainebleau where after a while he was arrested under suspicion of being a German spy, an event that made him famous in Norway. He was released from prison after a month, thanks to the intervention of Darboux.

Lie obtained his PhD at the University of Christiania in 1871 with a thesis entitled On a class of geometric transformations. The dissertation contained ideas from his first results published in Crelle’s Journal and also the work on contact transformations, a special case of these transformations being a transformation which maps a line into a sphere, which he had discovered while in Paris. The next year, the Norwegian Parliament established an extraordinary professorship for him. In 1884, Although Lie was producing highly innovative mathematics, he became increasingly sad at the lack of recognition he was receiving in the mathematical world. One reason was undoubtedly his isolation in Christiania, but a second reason was that his papers were not easily understood, partly through his style of writing and partly because his geometrical intuition greatly exceeded that of other mathematicians. Klein, realising the problems, had the excellent idea of sending Friedrich Engel to Christiania to help Lie.[1] Engel, who had received his doctorate from Leipzig in 1883 having studied under Adolph Mayer writing a thesis on contact transformations, would help Lie to write his most important treatise, Theorie der Transformationsgruppen, published in Leipzig in three volumes from 1888 to 1893.

In 1886 Lie became professor at Leipzig as successor of Felix Klein, who had moved on to Göttingen.[3] In November 1889, Lie suffered a mental breakdown and had to be hospitalized until June 1890. After that, he returned to his post, but over the years his anaemia progressed to the point where he decided to return to his homeland. Consequently, in 1898 he tendered his resignation in May, and left for home in September the same year. Sophus Lie died the following year, in February 1899, at age 56 of the then incurable pernicious anemia.

Lie founded the theory of continuous symmetry and used it to study differential equations and geometric structures. Continuous or continuous symmetry operations are, for example, shifts and rotations around arbitrary, also infinitesimal, amounts, in contrast to discrete symmetry operations such as reflections. Based on his work, he developed an algorithm for the numerical integration of differential equations (Lie-Integration) or the method of footpoint transformation. In order to investigate and apply continuous transformation groups (today called Lie groups), he linearized the transformations and investigated the infinitesimal generators. The linkage properties of the Lie group can be expressed by commutators of the generators; today, the commutator algebra of the generators is called Lie algebra. Hermann Weyl used Lie’s work on group theory in his papers from 1922 and 1923, and Lie groups today play a role in quantum mechanics.[9]