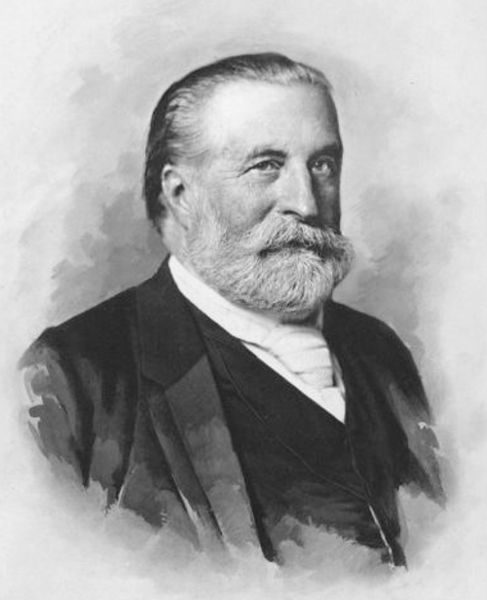 On December 16 1836 (greg.), Baltic German surgeon Ernst von Bergmann was born. Von Bergmann was a pioneer of aseptic surgery and must undoubtedly be attributed to the greatest surgeons of his time. His main merits are the co-foundation of brain surgery and the introduction of asepsis in wound treatment.

“Nature seems to smile to us, and we overlook her secretly threatening finger.”
– Ernst von Bergmann, as quoted in [6]

Ernst von Bergmann came from a Baltic family and was the son of Richard von Bergmann (1805-1878), pastor to Rūjiena in present-day Latvia, and Bertha Krüger (1816-1877). After completing his secondary education at the humanistic educational institution Birkenruh near Wenden (Livonia), Bergmann studied medicine in Dorpat between 1854 and 1860, graduated as medical doctor in 1860, and started working as an assistant at the Dorpats Surgical Clinic. In 1864 he habilitated under his later father-in-law Georg Adelmann, who was later promoted to Prussian nobility, and Georg von Oettingen.

He remained in Dorpat until 1878, interrupted by a longer study trip (Königsberg, Breslau, Vienna, Hanover, Munich, Heidelberg, Leipzig and Berlin), initially as a private lecturer for surgery, and from 1871 – following his teacher Adelmann – as professor of surgery. In 1878 he followed a call to Würzburg and in 1882 he took over the chair of Bernhard von Langenbeck in Berlin as well as the directorate of the Surgical University Clinic in Ziegelstraße, which he headed until 1907.

From War Surgery to Steam Sterilization

Bergmann must undoubtedly be considered one of the greatest surgeons of his time. During his career, Ernst von Bergmann gained rich experiences in war surgery, especially during the Prussian-Austrian war, the German-French war and the Russian-Turkish war. Von Bergmann was able to treat knee joint injured without surgery which was groundbreaking. After bandaging the patient he applied the Lister wound dressing in a plaster dressing to immobilize the patient. With this method the fatalities of this injury could be significantly reduced. At first he turned to the Listerian method of antisepsis by spraying with carbolic acid, which he practiced at his village hospital since 1875,[5] he soon replaced this dangerous method with the use of dry sublimate gauze, and finally left the chemical antisepsis completely in 1886. Together with his Berlin student Curt Schimmelbusch, he turned to the use of steam-sterilized dressing materials. 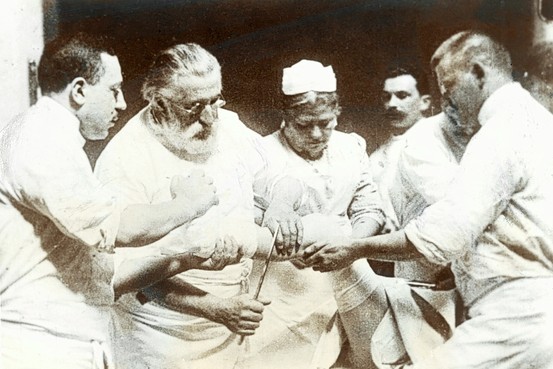 Ernst von Bergmann in surgery with his colleagues

Further, Ernst von Bergmann developed and improved several surgical methods including appendectomy, and oesophagus and hydrocyle surgery. To his most important publications belong his 1878 work Die Behandlung der Schußwunden des Kniegelenkes im Kriege (On the treatment of gunshot wounds of the knee joint during the war) as well as Die Lehre von den Kopfverletzungen (The Doctrine of Head Injuries) and Die chirurgische Behandlung der Hirnkrankheiten (The Surgical Treatment of Brain Diseases).  During his career, Ernst von Bergmann was also called in for the treatment of the malignant laryngeal disease of Emperor Frederick III, in which his student Friedrich Gustav von Bramann performed a tracheotomy.[4]

Ernst von Bergmann became a member of the Leopoldina and President of the German Society of Surgery. In 1893 he was chairman of the Society of German Natural Scientists and Physicians. In 1904, von Bergmann was co-founder of the journal for continuing medical education, which continues to this day under the name Zeitschrift für ärztliche Fortbildung und Qualität im Gesundheitswesen.