You are here: Home › geology › Sir Edward Sabine and the Earth’s Magnetic Field 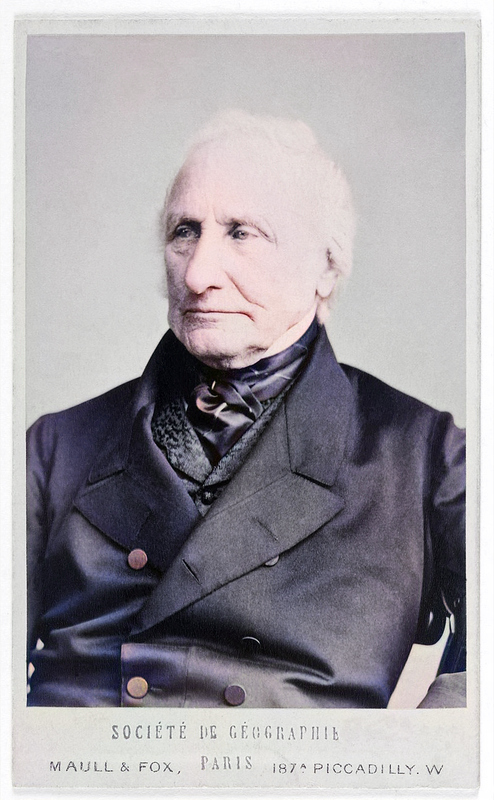 On October 14, 1788, Irish astronomer, geophysicist, ornithologist, explorer, soldier and the 30th President of the Royal Society Sir Edward Sabine was born. His aim was to study the shape of the Earth and its magnetic field. He led the effort to establish a system of magnetic observatories in various parts of British territory all over the globe, and much of his life was devoted to their direction, and to analyzing their observations.

Edward Sabine was born in Dublin, Ireland, to Joseph Sabine, a member of a prominent Anglo-Irish family who was visiting his Irish relatives at the time of his son’s birth. The family connections with Ireland can be traced back to the 17th century. His mother, Sarah Hunt, died when he was just one month old. Edward Sabine was educated at the Royal Military Academy, Woolwich and obtained a commission in the Royal Artillery as a 2nd lieutenant when he was only 15 years old. About ten years later, Edward Sabine became captain. During the Peninsular War, Sabine was stationed at Gibraltar and gained his first experience in combat in the War of 1812 against the United States. Sabine saw action several times, particularly in the Niagara Campaign. He returned to England after a short spell of military service in Quebec and devoted the rest of his life to astronomy, terrestrial magnetism, and physical geography.

In 1818, Edward Sabine was elected a Fellow of the Royal Society and he was invited to take part that year in Captain John Ross‘ first Arctic expedition.[7] Sabine was told to assist Ross “in making such observations as may tend to the improvement of geography and navigation, and the advancement of science in general.” Even though the principal purpose of the voyage was to find the Northwest Passage, several objects of scientific curiosity were deemed worthy of investigation, such as the location of the Earth’s north magnetic pole and the behavior of pendulums in high latitudes. However, the expedition ended in controversy. A very public row broke out between the two men when they arrived home.

Sabine objected when Ross claimed the credit for certain magnetic observations. He also accused Ross of stealing magnetic measurements without giving him due credit, and of refusing to allow him enough time on the expedition to take accurate readings. The results of Sabine’s magnetic researches were published in the Philosophical Transactions of the Royal Society. Although he viewed his work as confirming and extending the discoveries of earlier “magnetic collectors,” he stressed the need for the multiplication and repetition of observations. Sabine was a diligent and careful scientist. He generally avoided theoretical discussion in his writings, believing that a true understanding of terrestrial magnetism would only be arrived at after exhaustive observations had been made on a global scale.

Already in 1819, Sabine returned to the Arctic as members of Lieutenant William Edward Parry‘s expedition in search of the Northwest Passage. The scientist intended to devote his time during the expedition to magnetic measurements, especially the possible interactions between magnetic needles, atmospheric electricity and the aurora borealis. They were also to attempt to establish the location of the Earth’s North Magnetic Pole, then believed to lie somewhere along the western shore of Baffin Bay. During the expedition, Sabine noted that changes in magnetic intensity had taken place since his previous visit. He attributed such changes to either a fluctuation in the Earth’s magnetic intensity or the shifting positions of the terrestrial magnetic poles. For his work in the Arctic Sabine received the Copley Medal from the Royal Society in 1821.

In 1852, Sabine recognized from the Toronto records that magnetic variations could be divided into a regular diurnal cycle and an irregular portion. The irregularity correlated very closely with fluctuations in the number of sunspots, whose cyclic nature had been discovered in 1844 by the German amateur astronomer Heinrich Schwabe. Sabine was the first to recognize that solar disturbances affected the Earth’s magnetic environment. On 6 April 1852, he announced that the Sun’s 11-year sunspot cycle was “absolutely identical” to the Earth’s 11-year geomagnetic cycle.[3] The following year, Sabine also made a similar correlation with the Moon, establishing that that celestial body too had an influence on the Earth’s magnetic field. He concluded that the Moon must have a significant magnetic field of its own to cause such an effect. But for once he was mistaken: the effect is actually the result of gravitational tides in the ionosphere.

In 1823 he was elected a corresponding member of the Göttingen Academy of Sciences. From 1826 he was an honorary member of the Russian Academy of Sciences in St. Petersburg. In 1855, he also became an honorary member of the Prussian Academy of Sciences. Sabine was president of the Royal Society from 1861 to 1871. In 1865, he became an honorary fellow of the Royal Society of Edinburgh, in 1867 he was elected to the American Academy of Arts and Sciences and in 1875 to the Académie des sciences. In 1869 he was awarded the Bathorde second class (Knight Commander). He was also honored with the Prussian Order Pour le Mérite for Sciences and Arts on August 17, 1857. In 1819 his brother named the swallow-guillemot (Xema sabini) after him. An island off the east coast of Greenland, on which Sabine had carried out pendulum experiments in 1823, has been called Sabine Island since 1869. It is also the eponym of Sabine Land on Svalbard. In 1935 the moon crater Sabine was named after him. Mount Sabine and the Sabine glacier in Antarctica also bear his name.