You are here: Home › explorer › James Clark Ross and the Ross Expedition 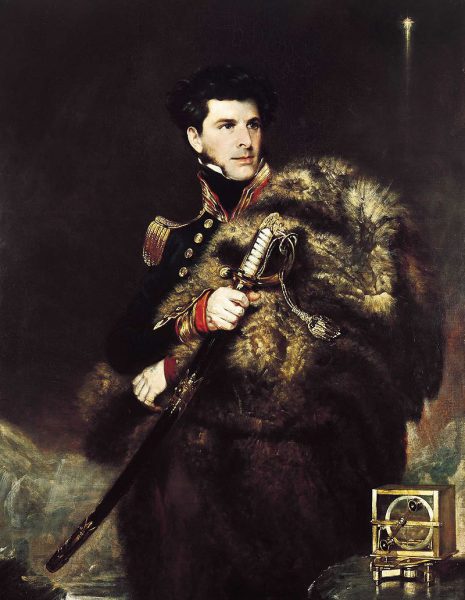 On February 2, 1841, British Polar explorer James Clark Ross with the ships HMS Erebus and HMS Terror reached a Southern latitude of 78° 10′ in Antarctica, when the expedition was forced to redraw because of a barrier of ice. The Ross expedition discovered the Ross Sea, Victoria Land, and the volcanoes Mount Erebus and Mount Terror, which were named for the expedition’s vessels.

First Experiences in the Arctic

James Clark Ross was born in London, England, the nephew of Sir John Ross, British naval officer and Arctic explorer, under whom he entered the navy in 1812, accompanying him on Sir John’s first Arctic voyage in search of a Northwest Passage in 1818. Between 1819 and 1827, Ross took part in four Arctic expeditions under Sir William Parry, and in 1829 to 1833, again served under his uncle on Sir John’s second Arctic voyage. It was during this trip that they located the position of the North Magnetic Pole on 1 June 1831 on the Boothia Peninsula in the far north of Canada. In 1834, Ross was promoted to Captain. In December 1835, he offered his services to the Admiralty to resupply 11 whaling ships which had become trapped in Baffin Bay. However, Ross found no trace of this last vessel, the William Torr, which was probably crushed in the ice in December 1835. From 1835–39, except for his voyage with the Cove, he conducted a magnetic survey of Great Britain with Edward Sabine.[1] 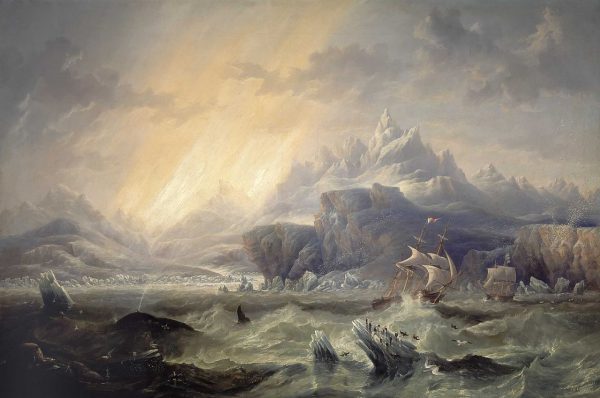 The Ross expedition in the Antarctic, by John Wilson Carmichael, 1847

Between 1839 and 1843, Ross commanded an Antarctic expedition (the Ross expedition) comprising the vessels HMS Erebus and HMS Terror and charted much of the coastline of the continent. On 21 November 1840 – captained by James Clark Ross – the Erebus and the Terror departed from Tasmania for Antarctica. Francis Crozier was second-in-command of the expedition and commanded HMS Terror. Support for the expedition had been arranged by Francis Beaufort, hydrographer of the Navy and a member of several scientific societies. On the expedition was Joseph Dalton Hooker, who had been invited along as assistant surgeon. Erebus and Terror were bomb vessels – an unusual type of warship named after the mortar bombs they were designed to fire and constructed with extremely strong hulls, to withstand the recoil of the mortars, which were to prove of great value in thick ice.

In 1841, James Ross discovered the Ross Sea, Victoria Land, and the volcanoes Mount Erebus and Mount Terror, which were named for the expedition’s vessels. They sailed for 250 nautical miles (460 km) along the edge of the low, flat-topped ice shelf they called variously the Barrier or the Great Ice Barrier, later named the Ross Ice Shelf in his honour. He correctly observed that it was the source of the tabular icebergs seen in the Southern Ocean. In the following year, he attempted to penetrate south at about 55°W, and explored the eastern side of what is now known as James Ross Island, discovering and naming Snow Hill Island and Seymour Island.

Ross reported that Admiralty Sound appeared to Ross to have been blocked by glaciers at its southern end. The expedition was not able to reach the South Magnetic Pole, but inferred its position. The expedition made the first “definitive” charts of magnetic declination, magnetic dip and magnetic intensity, in place of the less good charts made by the earlier expeditions of Charles Wilkes and Dumont d’Urville. Furthermore, they made substantial observations of the zoology and botany of the region, resulting in a monograph on the zoology, and a series of four detailed monographs by Hooker on the botany, collectively called Flora Antarctica and published in parts between 1843 and 1859. The expedition was the last major voyage of exploration made wholly under sail.

In Search of John Franklin

He was awarded the Gold Medal of the Société de Géographie in 1843, elected to the Royal Society in 1848 and knighted in 1844. In 1848, Ross was sent on one of three expeditions to find Sir John Franklin.[5] He was given command of HMS Enterprise, accompanied by HMS Investigator. Because of heavy ice in Baffin Bay he only reached the northeast tip of Somerset Island where he was frozen in at Port Leopold. In the spring he and Sir Francis McClintock explored the west coast of the island by sledge. He recognized Peel Sound but thought it too ice-choked for Franklin to have used it. (In fact Franklin had used it in 1846 when the extent of sea ice had been atypically low.) The next summer he tried to reach Wellington Channel but was blocked by ice and returned to England.

In 1912, the Norwegian explorer Roald Amundsen wrote of the Ross expedition that

“Few people of the present day are capable of rightly appreciating this heroic deed, this brilliant proof of human courage and energy. With two ponderous craft – regular “tubs” according to our ideas – these men sailed right into the heart of the pack [ice], which all previous explorers had regarded as certain death … These men were heroes – heroes in the highest sense of the word.“

David Gariff, Art and Photography in the Heroic Age of Antarctic Exploration, Part 1, [9]