You are here: Home › astronomy › Asaph Hall and the Discovery of Phobos and Deimos 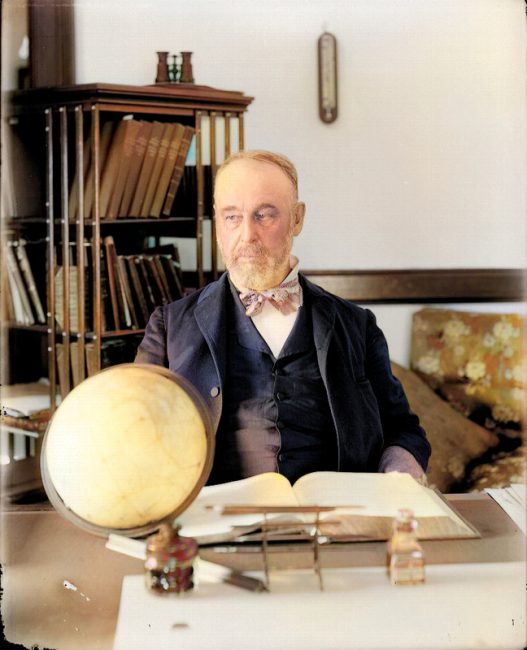 On October 15, 1829, American astronomer Asaph Hall III was born, who is most famous for having discovered the moons of Mars, Deimos and Phobos, in 1877. He determined the orbits of satellites of other planets and of double stars, the rotation of Saturn, and the mass of Mars.

Asaph Hall was born in Goshen, Connecticut, USA, the son of Asaph Hall II (1800–42), a clockmaker, and Hannah Palmer (1804–80). The watch manufacturing business of Hall’s father was going badly, he died when Asaph was only 13 years old. Due to the early death of his father, Hall had to leave school at the age of 16 to become an apprentice to a carpenter. Later on, Asaph Hall enrolled at the Central College in McGrawville, New York, studying mathematics. There, Hall took classes from an instructor of geometry and German, Angeline Stickney, who should become his wife in 1856.

The US Naval Observatory

In 1856, Hall took a job at the Harvard College Observatory in Cambridge, Massachusetts, and turned out to be an expert computer of orbits. Hall became assistant astronomer at the US Naval Observatory in Washington DC in 1862, and within a year of his arrival he became professor for mathematics in 1863. Asaph Hall was given the responsibility for the USNO 66-cm (26 inches) telescope, the largest refracting telescope in the world at the time. With it, he should managed to discover Phobos and Deimos in 1877  and he also noticed a white spot on Saturn which he used as a marker to ascertain the planet’s rotational period.

In 1877, Mars was in an unusually favorable position for observing astronomers worldwide, who turned their attention to the red planet. This led on the one hand to the discovery of the “Mars channels” by Giovanni Schiaparelli and on the other hand to the discovery of the two Mars moons Phobos and Deimos (Greek: fear and terror) by Hall.[3] He was very energetically supported by his wife Chloë Angeline Stickney Hall, who encouraged him to make further observations. The moons were named after the two companions in the Iliad who pull the chariot of the god of war Ares (lat. Mars). Phobos (diameter 26.8 km × 22.4 km × 18.4 km) and Deimos (diameter 15.0 km × 12.2 km × 10.4 km) are two irregularly shaped boulders. Possibly they are asteroids that were captured by Mars. Their existence had been described several times in literature long before, most recently by Voltaire,[4] who wrote about two moons of Mars in his 1750 story Micromégas. It is likely that Voltaire took over this idea from Jonathan Swift,[5] whose book Gulliver’s Travels was published in 1726. In the third part of the book, the astronomers of the country of Laputa are said to have “also discovered two smaller stars or satellites orbiting Mars, the inner of which is exactly three of its diameters away from the center of the main planet and the outer five.” It is believed that Swift had heard of a misinterpretation of Johannes Kepler.[6] He had interpreted the anagram that Galileo Galilei sent to him in 1609 to tell him about the discovery of the phases of Venus as the discovery of two moons of Mars.[7] 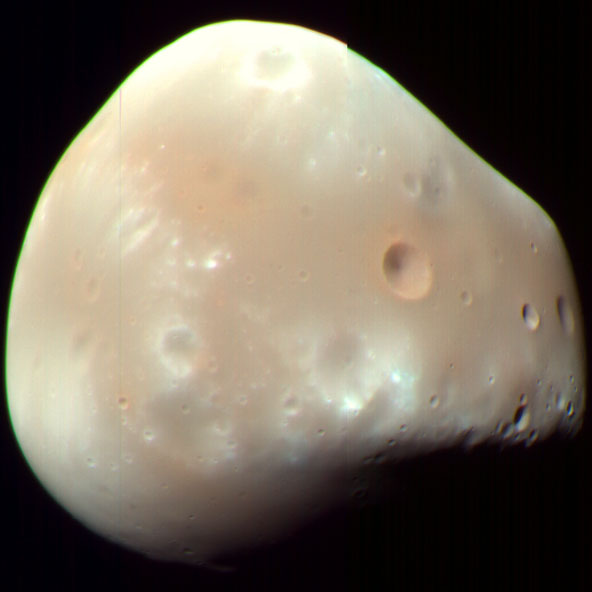 Color-enhanced image of Deimos, a moon of Mars, captured by the HiRISE instrument on the Mars Reconnaissance Orbiter on 21 Feb 2009.

Further, Asaph Hall demonstrated that the position of the elliptical orbit of Saturn’s moon, Hyperion, was retrograding by about 20° per year. Hall also investigated stellar parallaxes and the positions of the stars in the Pleiades star cluster.He submitted an article entitled “On an Experimental Determination of Pi” to the journal Messenger of Mathematics in 1872. In it, the scientist reported the results of an experiment in random sampling that Hall had persuaded his friend, Captain O.C. Fox, to perform when Fox was recuperating from a wound received at the Second Battle of Bull Run. The experiment involved repetitively throwing at random a fine steel wire onto a plane wooden surface ruled with equidistant parallel lines. This paper, an experiment on the Buffon’s needle problem, is a very early documented use of random sampling in scientific inquiry.

Asaph Hall retired from the Navy in 1891. He became a lecturer in celestial mechanics at Harvard University in 1896, and continued to teach there until 1901. Asaph Hall had been a member of the National Academy of Sciences since 1875 and of the American Philosophical Society since 1978. In 1879 he received the Gold Medal of the Royal Astronomical Society of Great Britain and was elected to the American Academy of Arts and Sciences and the Académie des sciences. On December 5, 1880, he was elected a corresponding member of the Russian Academy of Sciences in St. Petersburg. In 1891, Hall left Washington and went to Annapolis, where he died in 1907.