You are here: Home › physics › Chien-Shiung Wu and the Conservation of Parity 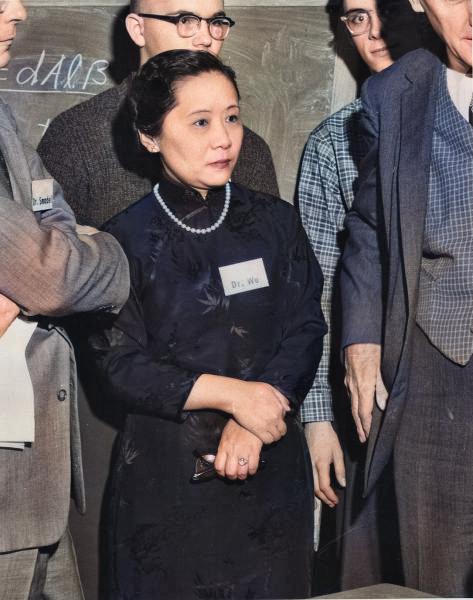 On May 31, 1912, Chinese-American experimental physicist Chien-Shiung Wu was born. Wu is best known for conducting the Wu experiment, which contradicted the hypothetical law of conservation of parity. This discovery resulted in her colleagues Tsung-Dao Lee and Chen-Ning Yang winning the 1957 Nobel Prize in physics, and also earned Wu the inaugural Wolf Prize in Physics in 1978. Her expertise in experimental physics evoked comparisons to Marie Curie.

“… it is shameful that there are so few women in science… In China there are many, many women in physics. There is a misconception in America that women scientists are all dowdy spinsters. This is the fault of men. In Chinese society, a woman is valued for what she is, and men encourage her to accomplishments yet she remains eternally feminine.”
– Chien-Shium Wu, as quoted in [11]

Chien-Shiung Wu was born in the town of Liuhe in Taicang, Jiangsu province, China, the second of three children of Wu Zhong-Yi, an engineer who in 1911 abandoned that profession to take part in the revolution that overthrew the Manchu dynasty, and his wife Fan Fu-Hua. Wu received her elementary school education at Ming De School, a school for girls founded by her fathern and continued 1923 to the Suzhou Women’s Normal School No. 2., a boarding school with classes for teacher training as well as for regular high school. In the competitive and mission for teacher school, Wu was ranked ninth among around 10,000 applicants. In 1929 Wu graduated at the top of her class, and was admitted to the National Central University in Nanjing, where she graduated in 1936 and, encouraged by her academic advisor, then traveled to the United States to pursue graduate studies in physics at the University of California at Berkeley, studying under Ernest O. Lawrence, who should be awarded the Nobel Prize for Physics in 1939 for his invention of the cyclotron particle accelerator.[1]

After receiving a Ph.D. in 1940 with a thesis on bremsstrahlung, the electromagnetic radiation produced by the deceleration of a charged particle when deflected by another charged particle, typically an electron by an atomic nucleus, she taught at Smith College and at Princeton University. In 1944 she undertook work on radiation detection in the Manhattan Project’s Substitute Alloy Materials (SAM) Laboratories at Columbia University. The role of the SAM Laboratories, headed by Harold Urey, was to support the Manhattan Project’s gaseous diffusion (K-25) program for uranium enrichment.[5] Wu worked alongside James Rainwater in a group led by William W. Havens, Jr., whose task was to develop radiation detector instrumentation. Wu also helped develop a process to enrich uranium ore to produce large quantities of uranium fuel for the bomb. Her work was vital to the historic effort.[3]

The Conservation of Parity

For 30 years, physicists had remained wedded to the principle of conservation of parity, which held that nature does not distinguish between left and right in nuclear reactions. Researchers made all their observations fit this theory, even though no experiments had ever solidly confirmed it.[3] In 1956 Tsung-Dao Lee of Columbia and Chen Ning Yang of the Institute for Advanced Study, Princeton, New Jersey, proposed that parity is not conserved for weak nuclear interactions. With a group of scientists from the National Bureau of Standards, Washington, D.C., Wu that year tested the proposal by observing the beta particles given off by cobalt-60. Wu observed that there is a preferred direction of emission and that, therefore, parity is not conserved for this weak interaction.

The Road to the Standard Model

She announced her results in 1957. The success of this and similar additional experiments brought worldwide acclaim not only to Wu but also to Lee and Yang, who won the 1957 Nobel Prize for Physics for their work. Wu did not share in the award, even though her work was essential to proving the men’s theory.[3] In 1958 Richard P. Feynman and Murray Gell-Mann proposed the conservation of vector current in nuclear beta decay.[6,7] This theory was experimentally confirmed in 1963 by Wu in collaboration with two other Columbia University research physicists. Another milestone on the road to the Standard Model, it postulated a universal form of Fermi’s beta decay model. Her demonstration that parity was not conserved brought other assumptions that physicists had made about the weak interaction into question. If parity is not conserved in weak force interaction, what about charge conjugation? This was an effect that held true for electromagnetism, gravity and the strong interaction, so it had been assumed that it would hold for the weak interaction too. Wu conducted a series of experiments on double beta decay in a salt mine under Lake Erie that proved that charge conjugation was not conserved either.

Another important experiment carried out by Wu was the confirmation of the E. M. L. Pryce and John Clive Ward’s calculations on the correlation of the quantum polarizations of two photons propagating in opposite directions. This was the first experimental confirmation of quantum results relevant to a pair of entangled photons as applicable to the Einstein-Podolsky-Rosen (EPR) paradox.[8] Wu’s thorough work, Beta Decay, published in 1965, became a standard reference book for nuclear physicists.[3]

She later investigated the structure of hemoglobin. After the 1972 Nixon visit to China, relations between the two countries improved, and she was able to visit China again in 1973. By this time her uncle and brother had perished in the Cultural Revolution, and the tombs of her parents had been destroyed. She was greeted by Chou En-Lai, who personally apologized for the destruction of the tombs. After this, she returned to China a number of times.