You are here: Home › physics › Sin-Itiro Tomonaga and Quantum Electrodynamics 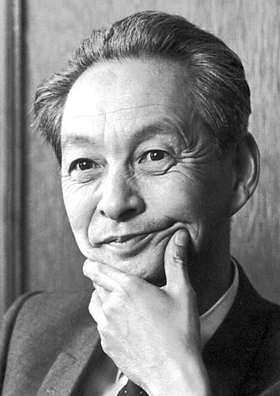 On March 31, 1906, Japanese physicist and Nobel laureate Sin-Itiro Tomonaga was born. He was influential in the development of quantum electrodynamics, work for which he was jointly awarded the Nobel Prize in Physics in 1965 along with Richard Feynman and Julian Schwinger. Tomonaga was one of the first to apply quantum theory to subatomic particles with very high energies.

Tomonaga was born in Tokyo in 1906 as the second child and eldest son of a Japanese philosopher, Tomonaga Sanjūrō, a renowned professor of the Medieval, Renaissance, Early Modern, and Kantian philosophy at the University of Kyoto, who is considered one of the leading thinkers from the Kyoto School. Hideki Yukawa,[5] also a Nobel Prize winner, was one of Tomonaga’s classmates during undergraduate school at the Kyoto Imperial University, which he entered in 1926. During graduate school at the same university, he worked as auniversity assistant. After graduate school, he joined Nishina’s group in Riken. In 1937, while working at Leipzig University, he collaborated with the research group of Werner Heisenberg.[6] Two years later, he returned to Japan due to the outbreak of the Second World War, but finished his doctoral degree on the study of nuclear materials with his thesis on work he had achieved while in Leipzig.

Tomonaga became professor of physics at Bunrika University (later Tokyo University of Education, a forerunner of Tsukuba University) in 1941, the year he began his investigations of the problems of quantum electrodynamics (QED). During the war he studied the magnetron, meson theory, and his “super-many-time” theory. World War II isolated him from Western scientists, but in 1943 he completed and published his research. Tomonaga’s theoretical work made quantum electrodynamics, i.e. the theory of the interactions of charged subatomic particles with the electromagnetic field, consistent with the theory of special relativity. It was only after the war, in 1947, that his work came to the attention of the West, at about the same time that Richard Feynman and Julian Schwinger published the results of their research. It was found that all three had achieved essentially the same result from different approaches and had resolved the inconsistencies of the old theory without making any drastic changes.[3,7]

In 1948, Tomonaga and his students re-examined a 1939 paper by Sidney Dancoff that attempted, but failed, to show that the infinite quantities that arise in QED can be canceled with each other. Tomonaga applied his super-many-time theory and a relativistic method based on the non-relativistic method of Wolfgang Pauli [8] and Fierz to greatly speed up and clarify the calculations. Then he and his students found that Dancoff had overlooked one term in the perturbation series. With this term, the theory gave finite results; thus Tomonaga discovered the renormalization method independently of Julian Schwinger and calculated physical quantities such as the Lamb shift at the same time.[3]

The achievement of these physicists must be understood in the context of the general development of physics since 1925, when quantum mechanics was discovered and elaborated by Werner Heisenberg, Erwin Schrödinger, Paul Dirac, Max Born, and others. Although this elegant theory had been developed specifically to understand the structure of the atom, it was soon generalized to include an explanation of radiation processes and of processes, like the Compton effect, involving the interaction of radiation and matter. The resulting theory — quantum electrodynamics — agreed qualitatively with experiment but refused to yield precise agreement. Most physicists of the 1930s took this to mean that there was something fundamentally wrong with the theory.[4]

Tomonaga was president of the Tokyo University of Education from 1956 to 1962, and the following year he was named chairman of the Japan Science Council. Throughout his life Tomonaga actively campaigned against the spread of nuclear weapons and urged that resources be spent on the peaceful use of nuclear energy.[3] In 1965, he was awarded the Nobel Prize in Physics, with Julian Schwinger and Richard P. Feynman, for the study of QED, specifically for the discovery of the renormalization method. He died of throat cancer in Tokyo in 1979.

Richard P. Feynman: The Relation of Mathematics to Physics, [12]