You are here: Home › engineering › Jethro Tull and the Agricultural Revolution 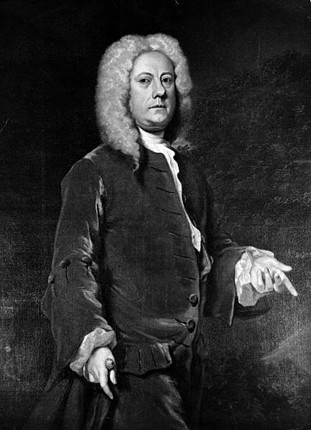 On March 30, 1674, English agricultural pioneer Jethro Tull was baptized. He perfected a horse-drawn seed drill in 1701 that economically sowed the seeds in neat rows. He later developed a horse-drawn hoe. Tull’s methods were adopted by many great land owners and helped to provide the basis for modern agriculture. This revolutionized the future of agricultural success.

“All sorts of dung and compost contain some matter which, when mixed with the soil, ferments therein; and by such ferment dissolves, crumbles, and divides the earth very much. This is the chief and almost only use of dung. … This proves, that its (manure) use is not to nourish, but to dissolve, i.e., divide the terrestrial matter, which affords nourishment to the Mouths of vegetable roots.”
— Jethro Tull, in The Horse-Hoeing Husbandry (1733)

Jethro Tull was probably born in Basildon, Berkshire, to Jethro Tull, Sr, and his wife Dorothy, née Buckeridge. Jethro Tull matriculated at St John’s College, Oxford at the age of 17 in order to study law but it is assumed that he did not earn a degree. He was called to the bar by the benchers of Gray’s Inn in December 1693. Unfortunately, he became sick very soon with a pulmonary disorder and travelled across Europe in search of a cure. It is believed that he spent quite some time in Italy and the south of France, especially Montpellier. There, Tull began to compare the agriculture with that of his own country. After his marriage in 1699, he began farming with his father.[1] 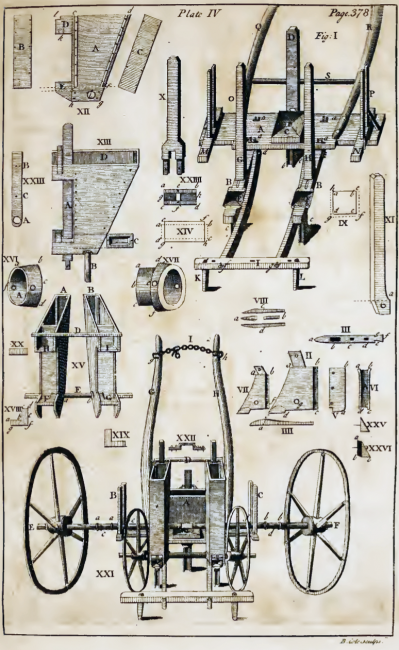 Tull had noted the similarity of his own horse-hoe husbandry to the practice followed by the vine-dressers in the observed regions, constantly hoeing or otherwise stirring their ground. He developed the theory that manuring soil was not necessary and came back to England to practice his new findings on the farm called Prosperous in Berkshire. Resuming the agricultural efforts he had commenced in Berkshire, he wrote his Horse-hoe Husbandry.

Around 1701, Tull made early advances in planting crops with his seed drill. The mechanical seeder sowed at the at the correct depth and spacing. Before the introduction of the seed drill, the common practice was to plant seeds by broadcasting (evenly throwing) them across the ground by hand on the prepared soil and then lightly harrowing the soil to bury the seeds to the correct depth. The next version of the seed drill was much lighter and more efficient.

In his 1731 publication entitled “The new Horse-houghing Husbandry, or, An essay on the principles of tillage and vegetation wherein is shewn, a method of introducing a sort of vineyard-culture into the corn-fields, to increase their product, and diminish the common expence, by the use of instruments lately invented by Jethro Tull”, Tull described how the motivation for developing the seed-drill arose from conflict with his servants. He had struggled to enforce his new methods upon them, in part because they resisted the threat to their position as laborers and their skill with the plough.

Earth as Sole Food for Plants

Jethro Tull considered earth to be the sole food of plants. Tull wrote with enthusiasm and carried his admiration of the powers of the earth to support vegetation too far; he was deceived, in fact, by the effects of his finely pulverising system of tillage, and did not sufficiently attend to the fact that there are many other substances in the commonly cultivated soils of the farmer besides the earths, and that so far from their being always the chief constituents of the soil, they very often form the smallest portion of even a highly productive field

Further, it is assumed that Jethro Tull was the first to promote the advantages of hoeing cultivated soils. He explained to the farmers that even in the driest weather good hoeing may help to procure moisture to the roots of plants. Influenced by the early Age of Enlightenment, Tull is considered to be one of the early proponents of a scientific and especially empirical approach to agriculture. He helped transform agricultural practices by inventing or improving numerous implements. Jethro Tull’s work on agriculture initiated a new movement in 18th-century agriculture called “horse-hoeing husbandry” or “new husbandry”. Tull’s system was supported by Henri-Louis Duhamel du Monceau in France, Michel Lullin de Chateauvieux in Switzerland, John Mills in England, and many others.

Jethro Tull died in 1741 at Prosperous Farm. His inventions are part of the foundations of modern agriculture. In his time, his inventions met with little understanding and were only used many years later. If up to now you haven’t heard about the agriculturalist Jethro Tull, then for sure you might know the 1970s progressive rock band Jethro Tull that was named after him.