You are here: Home › literature › The Short but Influential Life of Stephen Crane 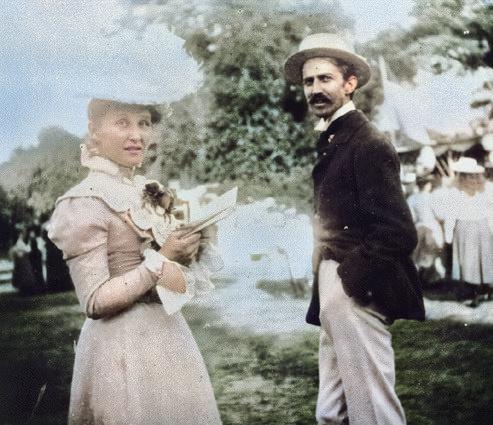 On June 5, 1900, famous American writer Stephen Crane died at age 28. Despite of his youth, he already had become one of the icons of American literature. Most famous is his American civil war novel ‘The Red Badge of Courage‘, which has been read by almost every American high school kid. Crane was one of America’s foremost realistic writers, and his works have been credited with marking the beginning of modern American Naturalism.

“A river, amber-tinted in the shadow of its banks, purled at the army’s feet; and at night, when the stream had become of a sorrowful blackness, one could see across it the red, eyelike gleam of hostile camp-fires set in the low brows of distant hills.”
— Stephen Crane, The Red Badge of Courage

Stephen Crane was born on November 1, 1871, in Newark, New Jersey, to Jonathan Townley Crane, a minister in the Methodist Episcopal church, and Mary Helen Peck Crane. Crane began writing as a child. He later studied at Lafayette College (Easton, Penn.) and Syracuse University, but after the death of his parents in 1890 he dropped out after a few months and began his writing career as a journalist in New York, where he mainly reported on life in the slums of the city. This experience he brought to his first novel Maggie. A Girl of the Streets (1893), who dealt with the topic mentioned in the title in a naturalistic manner. The book was generally rejected for its ruthless portrayal and alleged insult to moral sentiment.

The Red Badge of Courage

‘The Red Badge of Courage‘ written in 1895 is a classic of American literature that realistically depicts the psychological complexities of fear and courage on the battlefield. This novel impressively describes the experiences of a young soldier in the American Civil War and was filmed in 1951 with Audie Murphy as the main character under the same title. People believed Crane to be a war veteran, but he never saw a battlefield by that time. He was just a 23 year old college dropout. Crane claimed that his source for the accurate descriptions of combat was the football field. When he finally experienced battle as a war correspondent, he said of the novel, “It was all right.“

In 1898 Crane settled in Sussex, England, and came into contact with literary greats there, including Joseph Conrad and Henry James. Because of his literary fame, he was hired as a war correspondent. Thus he saw the Greek-Turkish War in 1897, one year later the Spanish-American War. On a trip to Cuba in early 1897, where he was to report on the rebellion there, he was shipwrecked and drifted several days in an open boat, which further worsened his already attacked health. He used his experiences as a shipwrecked man literarily in the story “The Open Boat” , published in the same year, which is still regarded as a classic masterpiece of American narrative literature of the 19th and 20th centuries and, for example, was revived motifs in German post-war literature.

In 1900 at age 28, Crane’s health had rapidly deteriorated due to general disregard for his physical well-being. Finally, after several respiratory attacks, he died of tuberculosis. Crane is not only known for his naturalistic and almost impressionistic novels and short stories, but also for his poetry. Here is one of his poems that really made a powerful impression on me:

In the desert
I saw a creature, naked, bestial,
Who, squatting upon the ground,
Held his heart in his hands,
And ate of it.
I said, “Is it good, friend?”
“It is bitter—bitter,” he answered;

At yovisto academic video search, you might watch a short documentary on Stephen Crane or directly join the lecture on American Literature from Missouri State University about his life and his literary work.