You are here: Home › literature › Alexander Pushkin and the Cultural Identity of Modern Russia 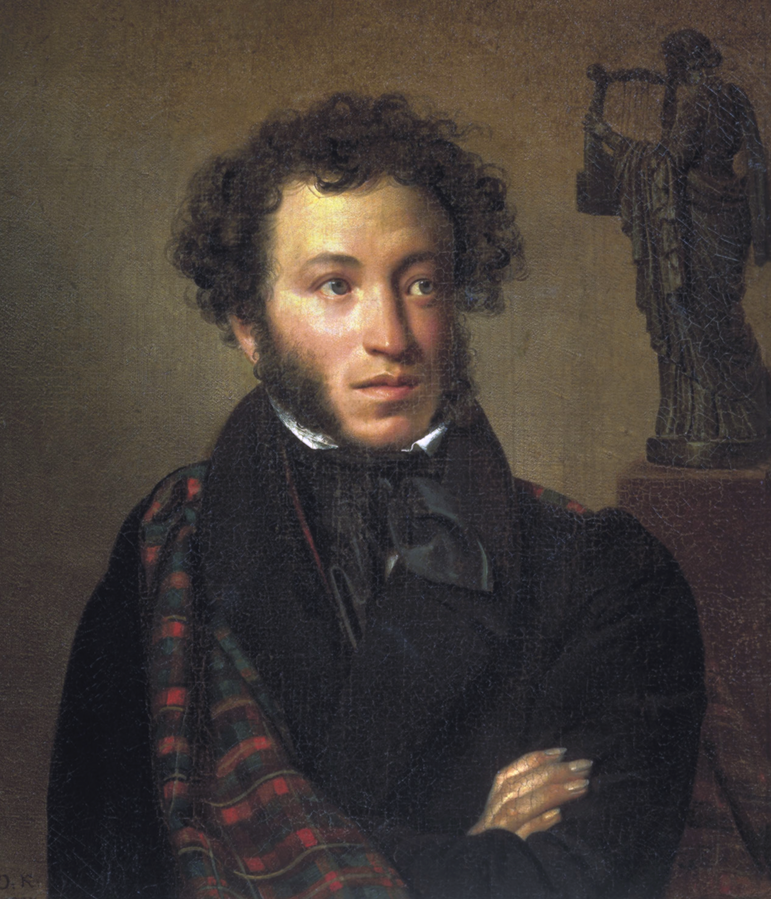 On June 6, 1799, Russian poet, playwright, and novelist of the Romantic era Alexander Pushkin was born. Pushkin is considered by many to be the greatest Russian poet and the founder of modern Russian literature.

“The illusion which exalts us is dearer to us than ten thousand truths.”
– Alexander Pushkin, The Hero ll.

Alexander Pushkin was born  in Moscow, Russia, as the second of five children of former guard officer Sergei Lvovich Pushkin and his wife Nadezhda Ossipovna, née Hannibal. On his father’s side, he came from an old noble family. On his mother’s side was his great-grandfather Abraham Petrovich Hannibal, originally an African slave, who gave to Tsar Peter the Great, whose godchild became and later ascended to Major General and Governor of Reval.

Pushkin published his first poem at the age of 15. While still a student, Pushkin was admitted in his absence to the Petersburg literary society Arsamas of V.A. Zhukovsky, which opposed traditional, encrusted language concepts of established literature and advocated the further development of Russian high and written language. The poet’s early poetry radiates his insatiable lust for life. When he left school, Pushkin had already built a reputation in the Russian literary scene. In 1820, Pushkin published Ruslan and Ludmila which was received controversially due to its style and topic. The epic fairy tale tells the story of the abduction of Ludmila, the daughter of Prince Vladimir of Kiev, by an evil wizard and the attempt by the brave knight Ruslan to find and rescue her.

As his career continued, Pushkin became more and more committed to social reforms. Eventually he became a spokesman for literary radicals and faced troubles with the government.  In the spring of 1820 Pushkin had to answer for some satirical poems in which he ridiculed public figures such as the Minister of War and the Minister of Education. He escaped exile to Siberia by protecting influential friends. However, he had to leave Petersburg in connection with a transfer to General Insow in Ekaterinoslaw in early summer. Pushkin went to the Caucasus and to Crimea and then to Kamianka and Chișinău, where he became a Freemason. He further joined the secret organisation Filiki Eteria which had the goal to overthrow the Ottoman rule in Greece and create an independent Greek state. Meanwhile Pushkin continued writing poems including The Captive of the Caucasus and The Fountain of Bakhchisaray. In 1824 Pushkin was dismissed from the civil service after he had expressed his sympathy for atheism in a letter. After moving to Odessa Pushkin got in trouble with the government again and spent the next years at  Mikhailovskoye near Pskov. After an audience with Tsar Nicholas I, Pushkin was again allowed to live in Moscow and Petersburg from 1826 to 1831, but his works were censored personally by the Tsar and his work and way of life were strongly controlled.  There he wrote further love poems and worked on his  verse-novel Eugene Onegin.

During 1825, Pushkin wrote one of his most famous plays, Boris Godunov. However, he was not able to publish it until five years later due to political troubles. The original and uncensored version of the drama was not staged until 2007. His marriage to Natalya Goncharova in 1831 brought about a change in Pushkin’s circumstances, after they met in 1830. In view of the wedding, Pushkin received from his father the village of Boldino, 250 km from Nizhny Novgorod. Pushkin only wanted to visit it briefly, but a cholera epidemic prevented his return to Moscow. Pushkin was forced to stay in the province and it became his greatest creative period. The couple moved to St. Petersburg in 1831, where with the support of Goncharova’s wealthy relatives they were able to participate in the glamorous life of the tsar’s court – which frustrated Pushkin, who longed for independence.

During the early 1830s, Pushkin had established a significant reputation and met Nikolai Gogol.[7] After reading Gogol’s 1831/32 volume of short stories Evenings on a Farm Near Dikanka, Pushkin supported him and would feature some of Gogol’s most famous short stories in the magazine The Contemporary, which he founded in 1836.

Fatally Wounded in a Duell

In 1837, Alexander Pushkin was fatally wounded in a duel with his brother-in-law, Georges-Charles de Heeckeren d’Anthès, also known as Dantes-Gekkern, a French officer serving with the Chevalier Guard Regiment, who attempted to seduce the poet’s wife, Natalia Pushkina.

For most of his compatriots Pushkin is considered to be THE Russian national poet (far ahead of writers such as Tolstoy, Dostoyevsky, Gogol or Pasternak, who are well known abroad). Until Napoleon’s invasion of Moscow in 1812, the Russian upper class spoke French. After the subsequent fire in Moscow, one wondered why one actually spoke the language of the enemy. Pushkin paved the way for the use of colloquial language in his poems, dramas and narratives; he created a narrative style that mixed drama, romance and satire – a style that has been inseparable from Russian literature ever since and has massively influenced numerous Russian poets. His romantic contemporaries were Byron and Goethe; he was influenced by Voltaire and the Shakespearean tragedies.