You are here: Home › literature › Selma Lagerlöf and the wonderful Adventures of Nils Holgersson 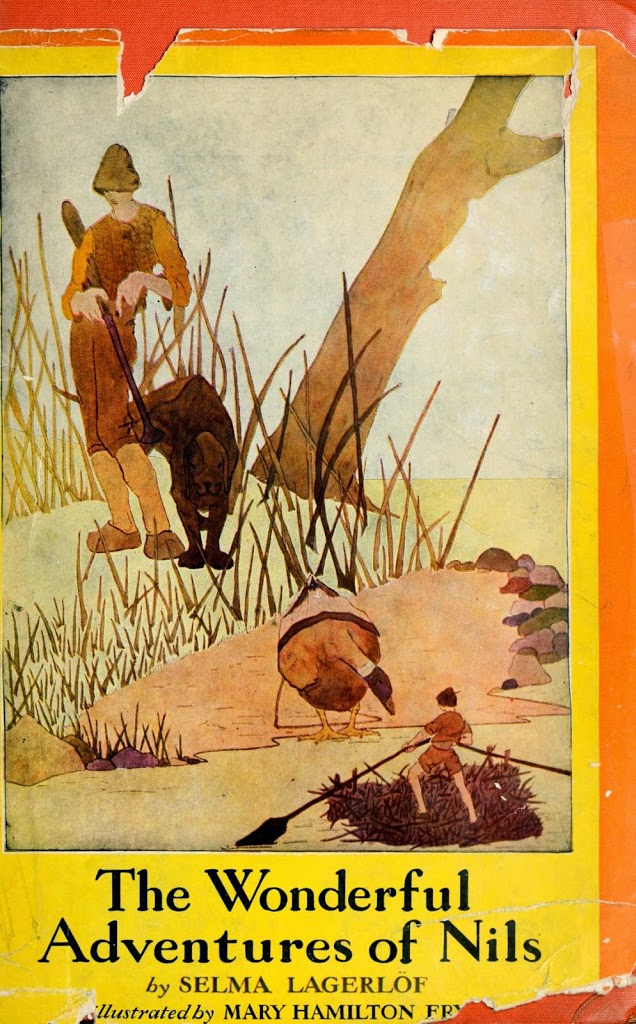 Cover of The Wonderful Adventures of Nils

On November 20, 1858, Swedish author and Nobel Laureate Selma Lagerlöf was born. She is best known for her children’s book ‘The Wonderful Adventures of Nils‘. Moreover, she was the first female writer to win the Nobel Prize in literature.

“If you have learned anything at all from us, Tummetott, you no longer think that the humans should have the whole earth to themselves.”
– Selma Lagerlöf, The Further Adventures of Nils (1907)

Selma Lagerlöf was born in 1858 as the daughter of the landowner Lieutenant Erik Gustaf Lagerlöf. Her mother Louise Lagerlöf, née Wallroth, came from a wealthy merchant family in Filipstad. Lagerlöf was born with a hip condition. At the age of three, her legs were completely paralyzed after an illness, but later the paralysis disappeared again. Already as a young girl Lagerlöf read passionately and was interested in the legends and stories of her homeland, which she had heard from her father and her grandmother.  Selma Lagerlöf attended a teachers college in Stockholm and became a teacher at the girls’ secondary school in Landskrona. She continued this activity until 1895. During her time in Landskrona she wrote her first novel, Gösta Berling. The book was based on stories about the people of her homeland that she had heard as a child. In 1890 Lagerlöf won with five chapters from the novel at a novel competition of the magazine Idun. The finished novel was finally published in 1891. But at first he received mostly negative reviews and sold himself badly. Contrary to Lagerlöf’s original expectations, the income from the book was far from sufficient to give up the teaching profession. Only after an extraordinarily positive review by the well-known Danish literary critic Georg Brandes in 1893 did Gösta Berling gradually establish itself in Sweden; today it is one of the most widely read Swedish books.

In 1895 Selma Lagerlöf gave up her profession as a teacher and undertook a long journey through Southern Europe until 1896. The result of this journey was the novel The Wonders of the Antichrist. In 1897 Selma Lagerlöf moved to Falun in Dalarna, on the one hand because her sister Gerda had asked her to, on the other hand because Dalarna was regarded as a centre of Swedish customs and folk culture. In 1896, a group of farmers emigrated to Jerusalem to join an American sect in Nås near Falun as a result of a religious revival. This made Selma Lagerlöf the subject of her novel Jerusalem – next to Vilhelm Moberg’s emigrant novels the second great emigrant epic in Swedish literature. The first volume of Jerusalem was a great success with critics and audiences immediately after its publication and marked Selma Lagerlöf’s final breakthrough as a writer.

However, to her most famous books belongs the book ‘Nils Holgerssons underbara resa genom Sverige‘, published in 1906. [1] The book starts out with the young Nils Holgersson, who takes delight in hurting the animals at his family’s farm. The boy catches a tomte while his family is out at church and Nils, who refuses to let the tomte free is turned into a tomte as well. The shrunken boy is now able to talk to the farm animals, who are delighted to see Nils being so tiny and they seek revenge. Meanwhile, wild geese are flying over the farm and a white farm goose attempts to join them. Nils holds on to the bird’s neck as it successfully takes off and joins the wild birds. Those are not too pleased to be joined by a boy and a domestic goose, but they take both on several adventures across Sweden. The goose and Nils have to accomplish several tasks in order to be accepted by the group. Also, Nils learns that the tomte might change him back to regular size, if he did good. [2] Nils Holgersson has been translated into more than 30 languages. The novel also gained importance when the new Swedish spelling was used for the first time in a literary work. The story around Nils’ adventures became so well known in Sweden, that a picture of Nils Holgersson, on the back of a goose flying over the plains of Scania, was printed on the reverse side of the Swedish 20 krona banknote. Several film adaptations have been produced all over the world and even a very successful anime series was produced.

In 1907 Selma Lagerlöf was awarded an honorary doctorate in philosophy by the University of Uppsala. On December 10, 1909, Selma Lagerlöf was the first woman to receive the Nobel Prize for Literature, “for her noble idealism, her imaginativeness, and the soulful portrayal that characterizes her poetry,” as it was stated in the statement. In 1914 Selma Lagerlöf was elected the first female member of the Swedish Academy. On New Year’s Day 1908 Selma Lagerlöf bought back the manor house from Mårbacka. In 1910 she was able to buy back the land with the Nobel Prize money, and in 1914 she was able to double the land by buying it again. Selma Lagerlöf farmed in Mårbacka as well as a factory for the production of oatmeal and devoted a lot of time, energy and money to her farm.

Selma Lagerlöf also published important novels after the Nobel Prize, including Liljecrona’s Home in 1911 and The Emperor of Portugallia in 1914, two works in which she tells of her homeland and its people. Her last major novel project was the trilogy The Löwenskölds, published in 1925-1928, which can be read both as the story of a fateful curse and as a clairvoyant analysis of the narcissism of the central figure. A planned fourth volume was no longer produced. In her later years she wrote a three-part autobiography: Mårbacka, From my Childhood Days and Diary of Selma Ottilia Lovisa Lagerlöf, her last completed work. The autobiography is not a description of her own life in the conventional sense, but consists of stories from her childhood that serve a specific purpose: to depict the backgrounds of her literary work.

In 1933 Selma Lagerlöf participated in a committee to rescue Jewish refugees from Germany. In 1940 she helped the German-Jewish writer Nelly Sachs to flee to Sweden, thus saving their lives. To support Finland financially during the Winter War of 1939, Selma Lagerlöf donated her gold Nobel Prize medal. In the midst of her efforts to help the war-torn population of Finland, Selma Lagerlöf died of a stroke in her home on 16 March 1940.