You are here: Home › economics › When Money Buys Little – the Hyperinflation of the Weimar Republic 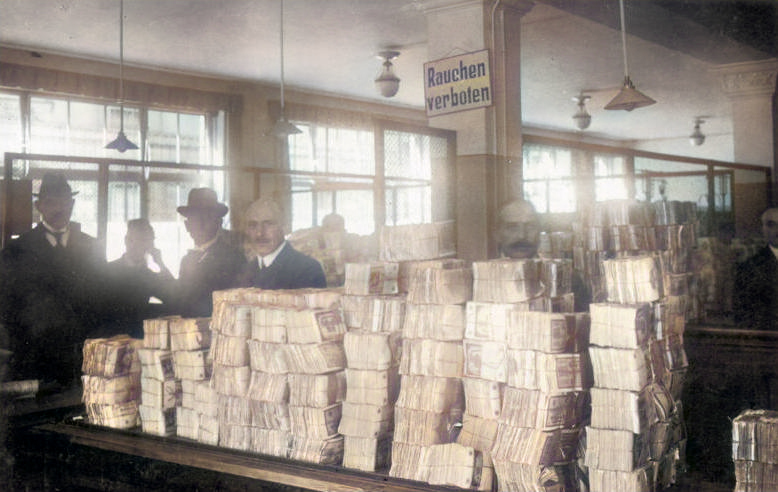 Mid November 1923, the Hyperinflation of the Weimar Republic reached its peak. Due to Germany’s obligation to pay large reparations after World War I, a hyperinflation was induced reaching its peak in November 1923, when the American dollar was worth 4,210,500,000,000 German marks.

“The bloody uproar of the war is over: let’s enjoy the carnival of the inflation. It’s loads of fun and paper, printed paper, flimsy stuff – do they still call it money? For five billion of it, you can get one dollar. What a joke! The Yankees are coming but as peaceful tourists this time. They purchase a Rembrandt for a sandwich and our souls for a glass of whisky. Krupp and Stinnes get rid of their debts, we of our savings. The profiteers dance in the palace hotels.”
– Klaus Mann, (1923)

World War I – Increasing the Amount of Money

Shortly after the beginning of the First World War on August 4, 1914, the German Reich government abolished the Reichsbank’s legal obligation to redeem gold notes. In addition, the state’s options for taking up debt and increasing the amount of money in the case of coins and banknotes were expanded by the abolition of the gold anchor (= statutory third coverage of Reich banknotes by gold). The plan had been developed secretly before the beginning of the war; it was supported by the so-called “national enthusiasm”. This increase in money was to be counter-financed by war loans instead of taxes. For the deployment and supply of the German armed forces, whose strength grew to several million after the mobilization, entailed unprecedented costs. At the same time, the purchasing power of the population for military requirements was to be skimmed off or shut down in order to be able to counteract the foreseeable shortage of goods in Germany caused by the war with the formation of a black market through a shortage of money among the citizens. In order to obtain additional money and gold, several war bonds were issued and the campaign Gold gab ich für Eisen (I gave gold for iron) was launched.

“The price of tram rides and beef, theatre tickets and school, newspapers and haircuts, sugar and bacon, is going up every week. As a result, no one knows how long their money will last and people are living in constant fear, thinking of nothing but eating and drinking, buying and selling. There is only one topic on everyone’s lips in Berlin: the dollar, the mark and prices.”
– Eugeni Xammar, Spanish journalist in Berlin, (February 1923)

At the same time, the quantity of consumer goods (food, clothing, fuel, etc.) for domestic consumption decreased for the citizen with the duration of the war. There were many bottlenecks in the supply of goods which forced the use of substitute and exchange materials, for example coffee instead of coffee beans or nettle fibres instead of cotton. In addition, considerable quantities of higher quality goods were needed for the maintenance of the military. In certain sections of the population, however, the funds available for consumption did not decrease to the same extent despite the subscription of war bonds. Prices rose. In order to avoid unrest, the wages of small workers and employees were adjusted in line with price trends, albeit with considerable delay. And in order not to raise the wealthy, taxes were not raised appropriately. Nevertheless, only a small circle of particularly rich people escaped the general impoverishment caused by the shortage of goods and inflation. 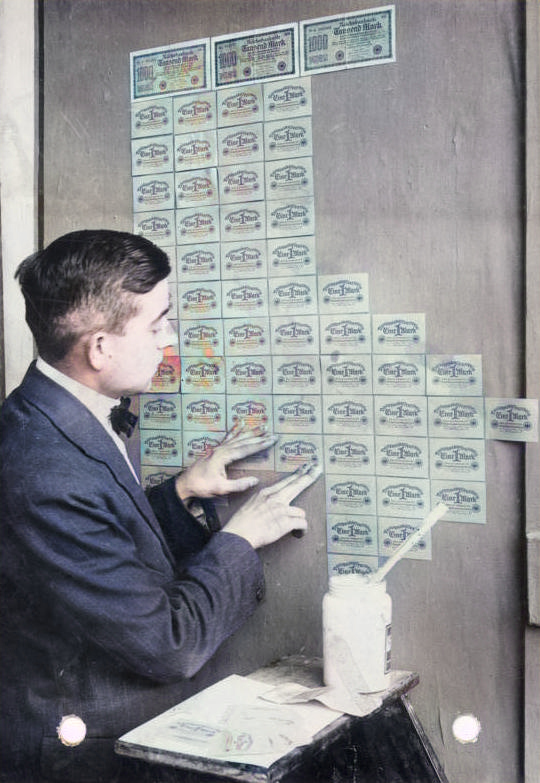 Notes for one mark: cheaper than wallpaper, 1923

The Lost War and Reparation Payments

In November 1918 the debts of the Reich, at about 150 billion marks, exceeded the national income of the year 1919 of an estimated 142 billion marks. Because it had lost the war, the German Reich could not pass the burden of the war on to other states. On the contrary, the Reich itself had to pay reparations, which further exacerbated inflation. Reparations were also paid for by printing additional paper money. Although reparations had to be paid in foreign currencies or in gold marks, the state procured the necessary funds by (uncontrolled) increasing its own paper money. By provoking the ruin of its own currency in this way, the German Reich also wanted to demonstrate that the reparation payment obligations under the Treaty of Versailles were excessive or unaffordable.

After the November Revolution of 1918, the Treaty of Versailles of 1919 obliged Germany to pay reparations to the victorious powers (especially France). German reparations had to be paid in gold marks, foreign exchange and material goods and were therefore not affected by inflation. In January 1920, the mark had only one tenth of its August 1914 exchange rate against the US dollar. The other states involved in the war also suffered the consequences of the world war. The years 1921 and 1922 saw a worldwide economic slump. The German economy was able to recover during this period. The devalued wages and incomes had the effect of wage dumping. German economic growth was stronger than that of the winners in the national economies. In October 1921 the Mark still had one hundredth of its August 1914 value, in October 1922 only one thousandth. 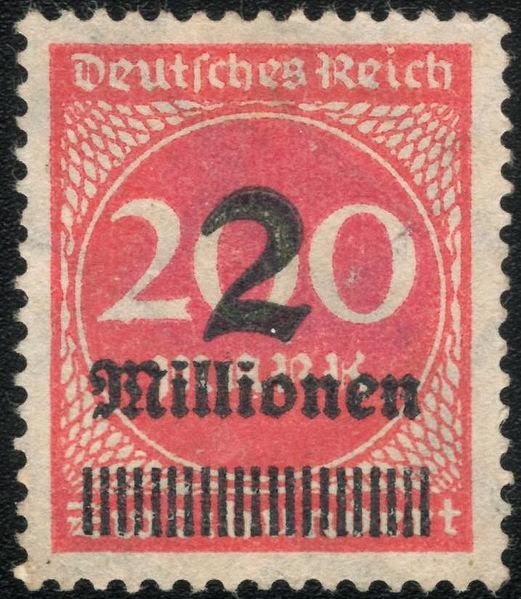 The Spiral of Hyperinflation

“Unknown heights have now been reached. The floating debt increased this morning by 160,000 milliard [billion] paper marks… The shops are demanding pounds, francs, Danish crowns, any other foreign currency you may care to enumerate… Except for things like tram fares we are now charged for most articles a few hundred million more than… present exchange rates in London… The Adlon Hotel charges the equivalent of four pounds or five pounds for a bottle of wine.”
Joseph Addison, British diplomat, (September 1923)

Because the Reich government was no longer in a position to pay the reparations at an appropriate level or to provide compensation in the form of economic goods, the Ruhr was occupied by French and Belgian troops. The German government under Reich Chancellor Wilhelm Cuno called for a “Ruhr struggle”, for passive resistance against the military occupation. In order to keep the strikers happy, appropriate financial aid was paid to them – in a mark that was devalued more and more rapidly by the government’s money increase. This marked the beginning of the months of hyperinflation, which generations of Germans still followed as an example of the horrors of inflation. The devaluation against the US dollar multiplied ever faster, until finally in November 1923 the exchange rate for one US dollar was 4.2 trillion marks.

“Lingering at shop windows was a luxury because shopping had to be done immediately. Even an additional minute could mean an increase in price. One had to buy quickly. A rabbit, for example, might cost two million marks more by the time it took you to walk into the store. A few million marks meant nothing, really. It was just that it meant more lugging. The packages of money needed to buy the smallest item had long since become too heavy for trouser pockets. They weighed many pounds… People had to start carting their money around in wagons and knapsacks. I used a knapsack.”
— George Grosz on the hyperinflation of 1923

Hyperinflation caused the German economy and the banking system to collapse. Two complete editions of 1000 Mark and 5000 Mark banknotes could no longer be put into circulation at the beginning of 1923; at the end of 1923 they had to be used with “1 billion” and “500 billion” overprints. In December 1923, the share index of the Reich Statistical Office rose to an average monthly value of 26.89 trillion points and the gold price to 86.81 trillion marks per troy ounce. Unemployment rose, real wages fell into the bottomless pit, and the KPD was gaining more and more popularity. The state-owned unions had bled out to such an extent that they had to be financed by the government. When Gustav Stresemann became Chancellor of the Reich, he broke off the Ruhr fight on September 26. The fear of an overthrow was decisive. The former Reich Chancellor Cuno’s assertion that the German Reich could no longer pay the reparations was tacitly collected. 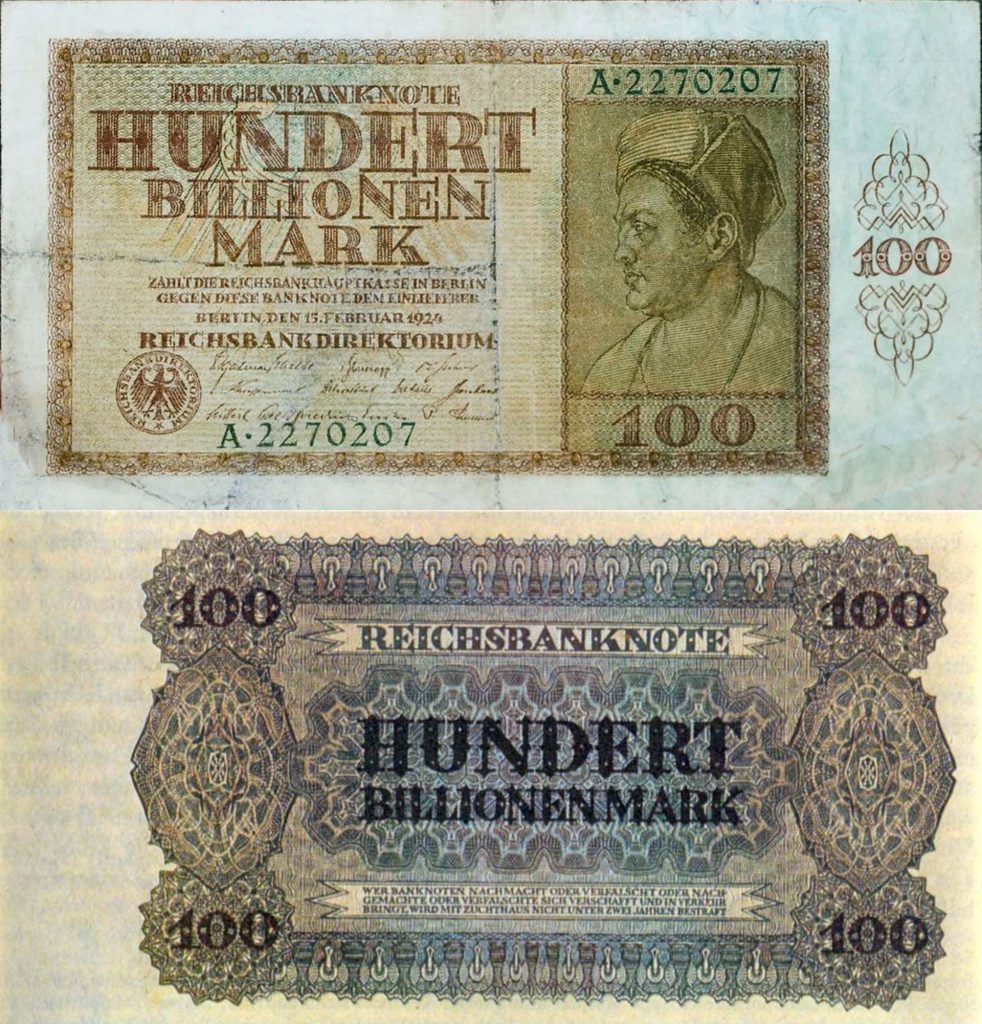 100 trillion paper marks have an official value of 100 Rentenmark as replacement money in 1924.

Stabilization of the Currency

Now the conditions were given to carry out a stabilization of the currency. This stabilization was also demanded by the victorious powers as a prerequisite for negotiations on the reparations payments that led to the Dawes Plan. In the course of 1924, economic conditions stabilized – and so did political conditions. In monetary terms, inflation and the speculation associated with it were ended on 15 November 1923 by the replacement of the paper mark with the introduction of the Rentenmark (of the same value as the later Reichsmark). Physically, however, the paper market notes valid on 15 November 1923 still had to serve as stable emergency money (price: 1 trillion marks = 1 Rentenmark) until the beginning of 1925, because the new Rentenmark could only be put into circulation slowly. Due to the inflationary depreciation of money, the economic and social burdens of the lost war were borne by the masses of dependent employees and pure financial asset owners. It was not until 1928 that real wages on average returned to the level of 1913 (according to official statistics). A significant part of the middle classes – used to living their lives without the help of the state – found themselves in poverty. Their financial reserves almost completely melted away due to inflation.

Political Effects of the Hyperinflation

Inflation as an important part of the overall social process of the early years of the Weimar Republic discredited the first German Republic in the eyes of many. Parts of the social middle class, the small and middle bourgeoisie, felt deceived by the Weimar Republic. In contrast to 1920, when they reacted to the Kapp Putsch with a general strike, growing sections of the working class could no longer see anything worth defending in this state, especially since the world economic crisis of 1929 made their social situation catastrophic again, as it was in 1923. There were also inflation winners. Thus the landowners were de facto completely debt-free in inflation, while the real estate maintained its value. The legislator tried to skim off these inflation gains through the house interest tax. The Weimar Republic continued for a decade after the crisis, and it is widely assumed that the increasing power of Adolf Hitler and the Nazi takeover resulted among other things from the economic difficulties.