You are here: Home › computer science › Samuel Morland and his Calculator Machine 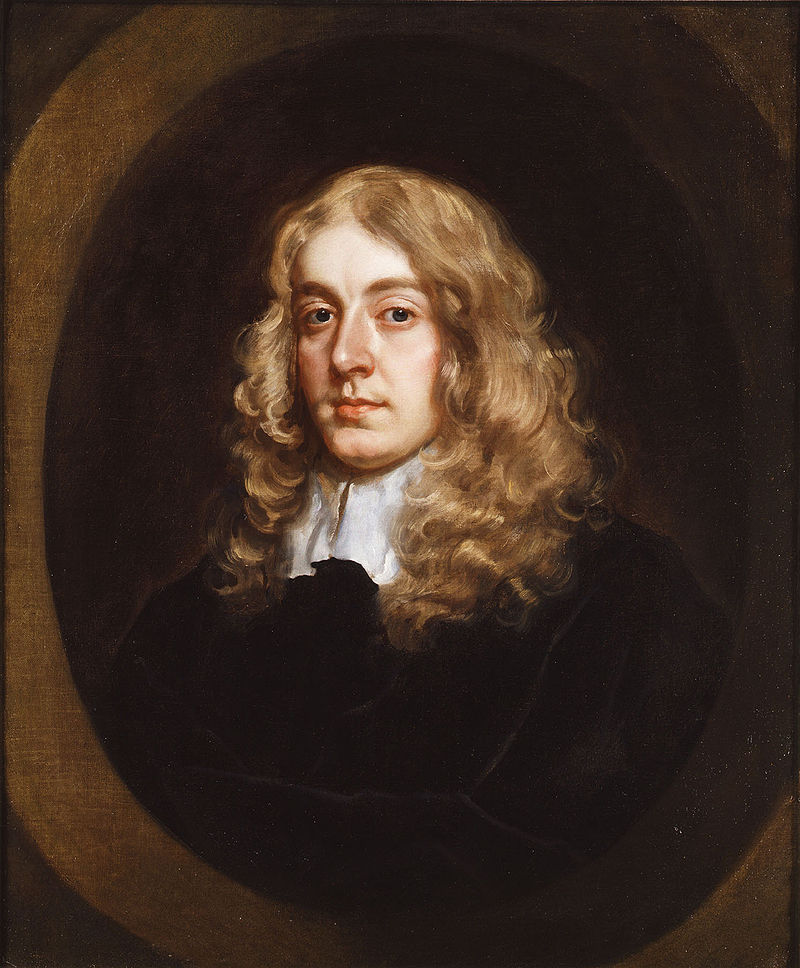 On December 30, 1695, English academic, diplomat, spy, inventor and mathematician Samuel Morland passed away. Morland was a polymath credited with early developments in relation to computing, hydraulics and steam power. He is probably best known for his designs of early calculator machines.

Samuel Morland was born in Sulhamstead Bannister, Berkshire, England, the son of Thomas Morland, the rector of Sulhamstead Bannister parish church in Berkshire. Morland entered Winchester School in Hampshire in 1638 and in May 1644 he entered as a sizar at Magdalene College, Cambridge, where he graduated in 1649 and stayed as a fellow until 1653. Devoting much time to the study of mathematics, Morland also became an accomplished Latinist and was proficient in Greek, Hebrew and French – then the language of culture and diplomacy. While a tutor at Cambridge, he first encountered Samuel Pepys who became a lifelong acquaintance [1,2].

First Encounter with a Calculator Machine

In 1653, Morland was included in the retinue of the James Whitelocke, on an embassy to the Queen of Sweden for the purpose of concluding a military alliance. Whitelocke describes him as a very civil man and an excellent scholar; modest and respectful; perfect in the Latin tongue; an ingenious mechanist.[2] The Swedish Queen was a noted patron of the sciences, and it was most likely at her court that Morland first became acquainted with the Pascaline, calculating machine of Blaise Pascal, who had presented Christina with an example in 1652. This is probably the most important reason, that some 10 years later, Morland commence the construction of three calculating devices.[3,4] In 1654, Morland was appointed as an assistant to the secretary (Clerk of the Signet) of the Lord Protector Oliver Cromwell — John Thurloe. In 1655 was sent by Cromwell on a mission to Italy to protest at actions taken against the Waldensians by the Duke of Savoy. He remained in Geneva for some time in an ambassadorial role, and also wrote The History of the Evangelical Churches of the Valleys of Piemont (1658).

Agent in the King’s Service

In the beginning, Morland was a keen supporter of Cromwell, but being a witness of various intrigues, especially this to induce King Charles II and his brother to effect a landing on the Sussex Coast and to put them both to death the moment they disembarked, Morland endeavored to promote the Restoration.[2] Morland began to work as a double agent, engaging in espionage and cryptography – activities that later helped him enter the King’s service. In 1660, Morland was created a baronet and given a minor role at court, but his principal source of income came from applying his knowledge of mathematics and hydraulics to construct and maintain various machines.

The Description and Use of two Arithmetick Instruments

In his book The description and use of two arithmetick instruments (1673), Morland described two invented calculating devices, which are working without charging the memory, disturbing the mind, or exposing the operations to any uncertainty. This is the first book on a calculator, written in English, and the first separate work on the subject after Napier’s Rabdologiae. There was little else in English on calculating instruments for more than 160 years from this book and the publication of Babbage in 1827. The book may also be considered the first comprehensive book in computer literature, as Blaise Pascal published nothing about his own machine, except an 18-page pamphlet in 1644. 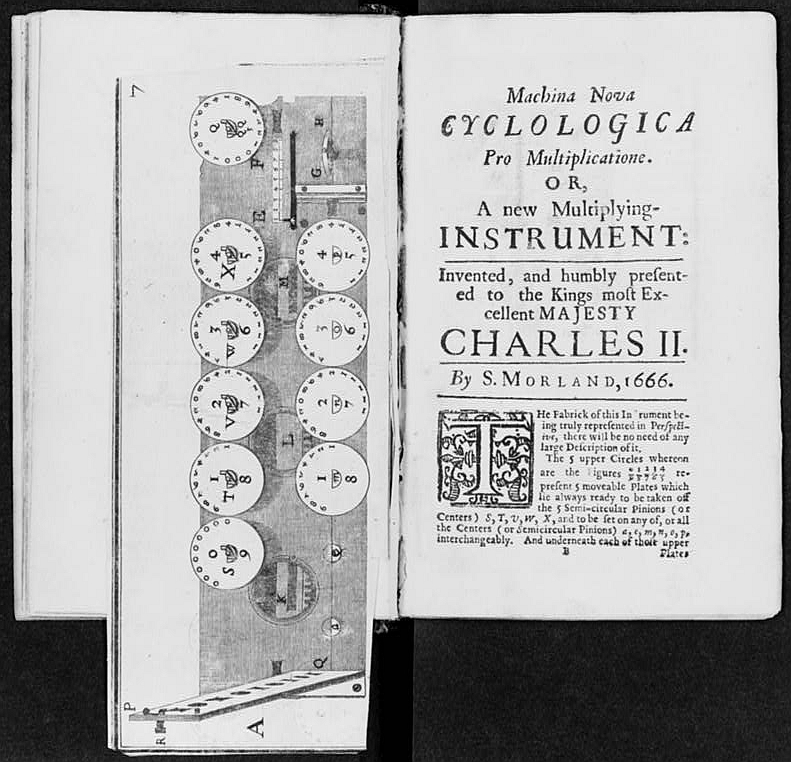 The first of his calculating machines was a non-decimal adding machine, working with English pounds, shillings and pence, similar to the Ciclografo of the Italian Tito Livio Burattini and made by Humphry Adamson. It was composed of eight dials that were moved by a simple stylus. Four examples of the adding machine survive. The largest models can add up to one million, in either decimals or pounds, shillings and pence. However, since there was no carry instrument on the machine, Morland built several auxiliary dials above each of the major dials, so that every time a major dial moved from 9 to 0, a tooth inside the machine would advance the carry dial. “Morland’s adding machine was … both simple in construction and reliable in operation as long as the operator remembered to add the carries forward at the end of the normal adding operation.“[6]

Second of the calculating machines of Morland was the so called multiplication machine. It is based on the principle of Napier’s bones, implemented as a flat, brass dish with a hinged, perforated gate and circular discs carved with numbers. This was mounted on semicircular pins. The discs themselves were circular versions of Napier’s bones, the numbers set around the edge of a disc instead of a straight line.[7] Actually, the multiplication machine of Morland simplifies only the intermediate products, using the principle of Napier’s rods. There is no automatic or mechanical carry mechanism provided. Morland’s third calculating machine was a device that can be used for trigonometric calculations, which he called the Maccina Cyclologica Trigonometrica. The trigonometer allowed the operator to perform trigonometry by drawing out a problem and measuring the solution as with drawing instruments but without the need for pen and paper. It was a set of three rulers set into a divided circle that could be moved about using dials to form a triangle of any shape.[3]

“Very Pretty, but not Very Useful”

Despite of the excellent workmanship of the arithmetic devices of Morland, they were not very useful for practical needs, moreover some of his contemporaries were not so fascinated by their usefulness also. Samuel Pepys wrote in his 1667-8 years diary, that the machine of Morland is very pretty, but not very useful, while the famous scientist Robert Hooke, wrote in his diary: Saw Sir S. Morland’s Arithmetic engine Very Silly.[3] Nevertheless, the calculating machines of Morland were rather appreciated by King Charles II as well as by Cosimo III de’ Medici, Grand Duke of Tuscany.

In 1671 Morland built a speaking trumpet that he claimed would allow a conversation to be conducted over a distance of three-quarters of a mile. He also invented the diagonal and balance barometer. But his central preoccupation was in the field of hydrostatics. In the 17th century many scientists were interested in developing mechanical ways to raise water. Morland’s invention was comprised of a cistern from which air was expelled by a charge of gunpowder, causing water to rise to fill the vacuum thus produced.[7] In 1681, recognizing Morland’s success, the king proclaimed him to be “Master of Mechanicks.” He began to go blind, losing his sight in about 1692. Samuel Moreland died on 26 of December 1695 in Hammersmith, UK, at age 70.