You are here: Home › mathematics › John Napier and the Discovery of Logarithms 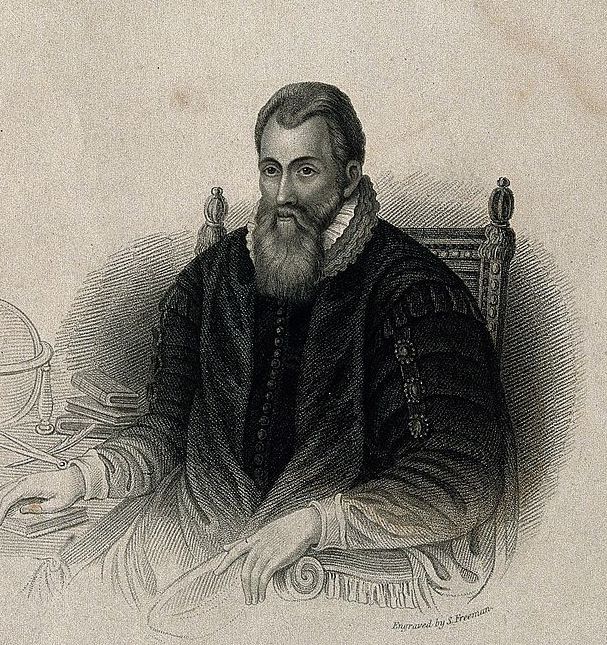 On April 4, 1617, Scottish mathematician, physicist, astronomer and astrologer John Napier of Merchiston, the 8th Laird of Merchistoun passed away. John Napier is best known as the discoverer of logarithms. He was also the inventor of the so-called “Napier’s bones“, a kind of abacus for calculation of products and quotients of numbers. Napier also made common the use of the decimal point in arithmetic and mathematics.

“A Logarithmic Table is a small table by the use of which we can obtain a knowledge of all geometrical dimensions and motions in space, by a very easy calculation. It is deservedly called very small, because it does not exceed in size a table of sines; very easy, because by it all multiplications, divisions, and the more difficult extractions of roots are avoided; for by only a very few most easy additions, subtractions, and divisions by two, it measures quite generally all figures and motions.”
– John Napier, [11] (1619)

John Napier grew up in a wealthy family as the Son of the Master of the Mint in Scotland and began his formal education at the age of 13. It is possible, that he left Scotland for some years to continue his studies in the Netherlands and France, but this is only assumed. 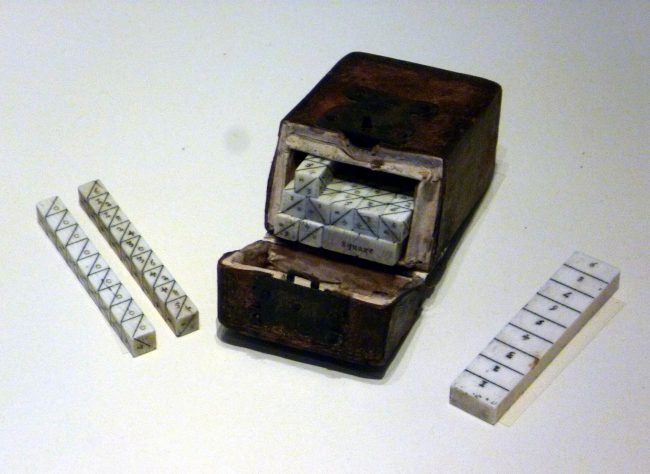 An ivory set of Napier’s Bones from around 1650

The Invention of Logarithms

Napier mostly dedicated his life to mathematics and theology, being a proud member of the protestant church.  Actually, Napier’s study of mathematics was only a hobby and in his mathematical works he writes that he often found it hard to find the time for the necessary calculations between working on theology. His Masterpiece, ‘Mirifici Logarithmorum Canonis‘ was published in 1614 and contained numerous mathematical problems related to logarithms and spherical trigonometry. His work instantly succeeded and Gresham College was one of the first to adapt his discovery. However, the logarithms we operate with today, are not quite the same Napier once developed.

Henry Briggs and the Popularization of Logarithms

When Henry Briggs visited Napier one year after publishing his book, Briggs deeply admired Napier’s work on the one hand, but had many ideas to change his logarithms on the other.[4] Briggs wanted to rescale the logarithms and also Napier edited his functions through his ‘numbering rods’ later known as Napier’s bones. Napier’s numbering rods were made of ivory, so that they looked like bones which explains why they are now known as Napier’s bones. To multiply numbers the bones were placed side by side and the appropriate products read off.[3] Both scientists critically contributed to the improvement of Napier’s original masterpiece and therefore, many calculations by hand were performed much quicker. 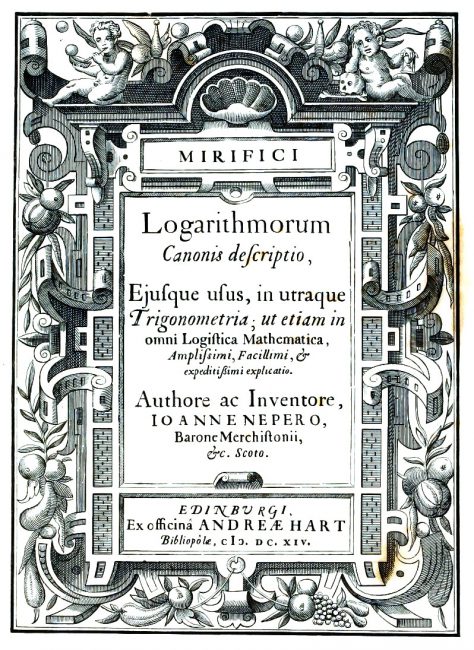 The introduction of logarithms to mathematics paved the way for numerous scientific approaches in the fields of astronomy and physics. For example Johannes Kepler was able to was able to reduce his observations through more exact mathematical calculations, underpinning Newton’s theory of gravitation.[5] Also, Pierre Simon Laplace praised Napier’s achievement, saying that logarithms, by shortening the labors, doubled the life of the astronomer.[6]

Another passion of John Napier was theology. To his most influential works belongs ‘A Plaine Discovery of the Whole Revelation of St. John‘, published in 1593. In the work, Napier attempted to calculate the end of the world, believing it to occur between 1688 and 1700. Napier also wrote anti-papal works and dedicated his ‘Plaine Discovery‘ to James IV and demanded the king to ‘reform the universal enormities of his country, and first to begin at his own house, family, and court.’ The work succeeded nationally and internationally, and was translated in various languages.

In addition to his mathematical and religious interests, Napier was often perceived as a magician, and is thought to have dabbled in alchemy and necromancy. It was said that he would travel about with a black spider in a small box, and that his black rooster was his familiar spirit.

James Tanton, Logarithms: What problem was Napier trying to solve?, [10]