You are here: Home › physics › The Case of Klaus Fuchs, Atomic Spy 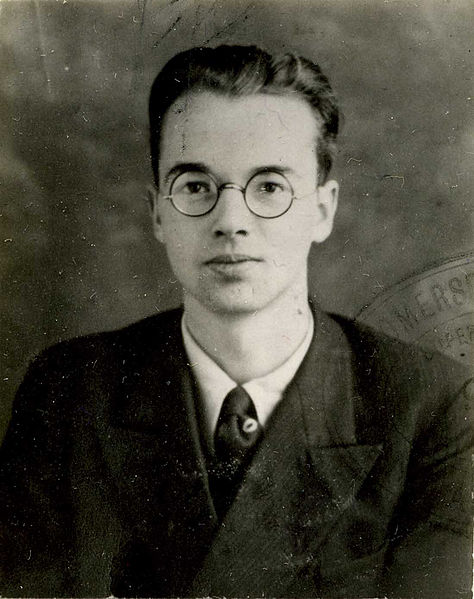 On December 29, 1911, German-born British theoretical physicist and atomic spy Emil Julius Klaus Fuchs was born. In the time of the development of the atomic bomb at the Los Alamos National Laboratory, Fuchs was responsible for many significant theoretical calculations relating to the first nuclear weapons, and later, early models of the hydrogen bomb. In 1950, Fuchs was convicted of supplying information from the American, British, and Canadian Manhattan Project to the Soviet Union during and shortly after the Second World War.

Klaus Fuchs was born in Rüsselsheim, Grand Duchy of Hesse, German Empire, as the third of four children of the social democratic, Lutheran theologian Emil Fuchs. Despite hostility and attacks from his classmates at the humanist grammar school in Eisenach, Fuchs was committed to democracy and the republic at an early age. He enrolled at the University of Leipzig in 1930, where his father was a professor of theology. Fuchs joined the student branch of the Social Democratic Party of Germany (SPD), as well as the the Reichsbanner Schwarz-Rot-Gold, the party’s paramilitary organisation. Since his father received a position at the Pedagogical Academy in Kiel, Klaus transferred to the University of Kiel, which his siblings also attended. He continued his studies in mathematics and physics there. In 1932, Fuchs offered to speak for Ernst Thälmann as the candidate for the presidential election wherefore he was expelled from the SPD and later joined KPD. Although he was wanted by the authorities in Germany, he managed to study in Berlin for another five months. In February 1933, Fuchs fled to England and became a research assistant at the University of Bristol.

Studies in England and Internment

He wrote his diploma thesis in 1936 with the later Nobel Prize winner Nevill F. Mott in Bristol on the subject of cohesive forces in metallic copper. At that time, he was mainly concerned with theoretical solid-state physics. Later on, Fuchs switched to a research post at the University of Edinburgh working under Max Born, who was himself a German refugee.[4] Together they published several papers and he also received a Doctorate in Science degree from Edinburgh. Fuchs applied to become a British citizen in August 1939, but his application had not been processed before the Second World War broke out in Europe in September 1939. There was a classification system for enemy aliens, but Born provided Fuchs with a reference that said that he had been a member of the SPD from 1930 to 1932, and an anti-Nazi. There, matters stood until June 1940, when the police arrived and took Fuchs into internment on the Isle of Man. In July, he was sent to an internment camp in Sherbrooke, Quebec, Canada, where he joined a communist discussion group led by Hans Kahle, a KPD member who had fought in the Spanish Civil War.

Max Born lobbied for his release. On Christmas Day 1940, Fuchs and Kahle were among the first group of internees to board a ship to return to Britain. Fuchs returned to Edinburgh in January, and resumed working with Born. On May 1941, he was approached by Rudolf Peierls of the University of Birmingham to work on the “Tube Alloys” program – the British atomic bomb research project. Despite wartime restrictions, he was granted British citizenship on 7 August 1942 and signed an Official Secrets Act declaration form.

Espionage and the Manhattan Project

There, in 1942, Fuchs made contact with Ruth Werner, agent of the Soviet military intelligence service GRU, and reported on the atomic bomb projects in Great Britain and the USA until his unmasking in 1950. Fuchs (codename “Rest”) was then teamed up with a courier (“Sonia”) so he would not have to find excuses to travel to London. In 1943, Fuchs transferred to Columbia University, in New York City, to work on gaseous diffusion as a means of uranium enrichment for the Manhattan Project. From August 1944 Fuchs worked in the Theoretical Physics Division at the Los Alamos Laboratory, under Hans Bethe.[5] Fuchs was one of the many Los Alamos scientists present at the Trinity test.[6] Bethe considered Fuchs “one of the most valuable men in my division” and “one of the best theoretical physicists we had.“

Fuchs was highly regarded as a scientist by the British, who wanted him to return to the United Kingdom to work on Britain’s post-war nuclear weapons program. He returned in 1946 and became the head of the Theoretical Physics Division at the Atomic Energy Research Establishment at Harwell. There he was engaged in the development of power reactors, including fast breeder reactors. His achievements were recognised in 1950 when he was proposed for membership of the venerable Royal Society Academy of Science. However, this was no longer the case. From late 1947 to May 1949 he gave Alexander Feklisov, his Soviet case officer, the principal theoretical outline for creating a hydrogen bomb and the initial drafts for its development as the work progressed in England and America. By September 1949, information from the Venona project indicated to GCHQ that Fuchs was a spy, but the British intelligence services were wary of indicating the source of their information. Under interrogation by MI5 officer William Skardon at an informal meeting in December 1949, Fuchs initially denied being a spy and was not detained. In January 1950, Fuchs arranged another interview with Skardon and voluntarily confessed that he was a spy.

It is very likely that Fuchs’s spying activities led the U.S. to cancel a 1950 Anglo-American plan to give Britain American-made atomic bombs. He was convicted on 1 March 1950 of four counts of breaking the Official Secrets Act by “…communicating information to a potential enemy.” He presented his spying activities until the end as an act of solidarity with the USSR, which he wanted to support in the fight against the Third Reich. Fuchs was of the opinion that his actions had prevented the use of nuclear weapons during the Cold War, as both sides were in possession of nuclear weapons.. After a trial lasting less than 90 minutes, Lord Goddard sentenced him to fourteen years’ imprisonment, the maximum for espionage, because the Soviet Union was classed as an ally at the time. In December 1950 he was stripped of his British citizenship. He was released after nine years and promptly emigrated to the German Democratic Republic. He continued his scientific career and achieved considerable prominence. He was elected to the Academy of Sciences and the SED central committee and was later appointed deputy director of the Institute for Nuclear Research in Rossendorf, where he served until he retired in 1979. He received the Patriotic Order of Merit, the Order of Karl Marx and the National Prize of East Germany.

After it had been assumed for more than 40 years after the Second World War that Klaus Fuchs was the only physicist from the Manhattan Project in Los Alamos who had passed on information about the construction of the atomic bomb to the Soviet Union, the release and publication of the results of the VENONA Project by the US military secret service confirmed the second – already suspected – spy, Theodore Alvin Hall. His Soviet code name was MLAD. Theodore A. Hall had handed over important material about the implosion method and other aspects of the construction of an atomic bomb to the Soviet Union in 1944. He was suspected as early as 1950, but at that time he denied all allegations and was never convicted. Only the exposure and confession of Klaus Fuchs led the FBI to his contact Harry Gold, who in turn opened the trail to David Greenglass and the couple Julius and Ethel Rosenberg. Gold’s lead officer John, also known as “Yakovlev” – Anatoly Yazkov – was the resident of the NKVD in New York throughout World War II. He had never been found there. Since these activities took place in the espionage area, which is fixed on secrecy, all information about these activities is to be regarded with caution and despite numerous revelations still partly controversial.

The Manhattan Project and its Cold War Legacy, [10]