You are here: Home › physics › Robert Stirling and the Stirling Engine 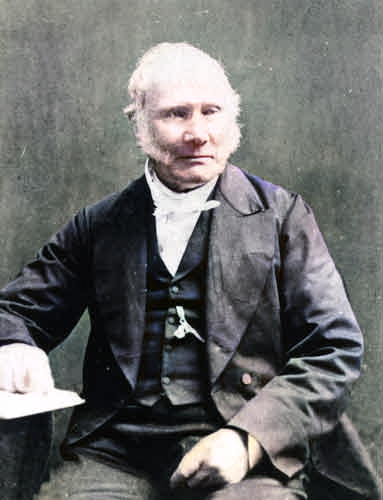 On October 25, 1790, Scottish clergyman Reverend Dr Robert Stirling was born. Stirling is best known for his invention of the Stirling engine, a heat engine that operates by cyclic compression and expansion of air or other gas (the working fluid) at different temperatures, such that there is a net conversion of heat energy to mechanical work.

Robert Stirling was born at Cloag Farm near Methven, Perthshire, the third of eight children of Patrick and Agnes Stirling and a grandson of Michael Stirling, inventor of a threshing machine. At an early age, Robert had been introduced to engineering by his father, Patrick Stirling, who had assisted his own father, Michael, in the maintenance of his threshing machines, and had always shown a keen interest in anything mechanical, and in particular in sources of power for machinery.[3] Nevertheless, Stirling studied divinity at the Universities of Edinburgh and Glasgow, and was licensed to preach in the Church of Scotland in 1816 by the Presbytery of Dunbarton. Later that year he became a minister on appointment as second charge of the Laigh Kirk of Kilmarnock. On 12 February 1824 Stirling was appointed as the minister of nearby Galston Parish Church from 1824, where he continued his ministry until 1878. In 1840 he was awarded an honorary Doctor of Divinity by University of St Andrews.

In 1816, at the age of 26, and shortly after his ordination as a minister, he patented an engine which produced motive power from heated air.[2] Stirling invented what he called the Heat Economiser (now generally known as the regenerator), a device for improving the thermal/fuel efficiency of a variety of industrial processes, obtaining a patent for the economiser and an engine incorporating it in 1816. In 1818 he built the first practical version of his engine, used to pump water from a quarry. The theoretical basis of Stirling’s engine, the Stirling cycle, would not be fully understood until the work of French physicist Sadi Carnot.[4]

Stirling engines are unique heat engines because their theoretical efficiency is nearly equal to their theoretical maximum efficiency, known as the Carnot cycle efficiency. Stirling engines are powered by the expansion of a gas when heated, followed by the compression of the gas when cooled. The Stirling engine contains a fixed amount of gas which is transferred back and forth between a “cold” end (often room temperature) and a “hot” end (often heated by a kerosene or alcohol burner). The “displacer piston” moves the gas between the two ends and the “power piston” changes the internal volume as the gas expands and contracts.[3]

In March 1843, Stirling supplied a powerful (by the standards of the time) engine to the Dundee Foundry Company, a foundry in Scotland. The engine had a threshold output of 34 kW at a speed of 28/min, cylinder diameter: 0.4 m, stroke: 1.22 m, water-cooled. For the first time, a regenerator with wire mesh was used. Fuel consumption was only one-third that of the steam engine previously used, with the same power output. This engine was in use for four years and had an efficiency of 18 %, which had never been achieved again in the 19th century. In 1850 the simple and elegant dynamics of the engine were first explained by William John Mcquorne Rankine.[5] Approximately one hundred years later, the term “Stirling engines” was coined by Rolf Meijer in order to describe all types of closed cycle regenerative gas engines.[3]

None of Stirling’s experimental work or papers survived except for two model engines built by him when he was a Minister at Kilmarnock. Today’s applications of Stirling’s famous invention include heat pumps; the NASA MOD I and II automotive engines; various hybrid electric vehicles; Swedish shipbuilder Kockums has built 8 Stirling powered submarines; biomass engines for developing countries; and Stirling engines are being used to convert solar energy to electricity with an efficiency better than non-concentrated photovoltaic cells.[2]

Rev. Robert Stirling died in Galston, East Ayrshire on 6 June 1878, at age 87. On 3 October 2014 Stirling was inducted into the Scottish Engineering Hall of Fame.