You are here: Home › geology › Vasily Dokuchaev and Foundations of Soil Science 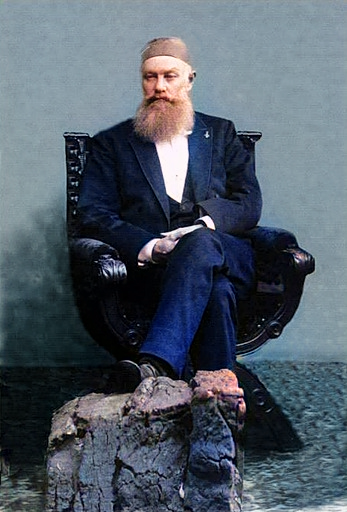 On October 26, 1903, (Julian Calendar) Russian Geologist and Geographer Vasily Dokuchaev passed away. Dokuchaev is commonly regarded as the father of Soil science, the study of soils in its natural setting. He developed soil science in Russia, and was, perhaps the first person to make wide geographical investigations of different soil types.

“The scientific basis of soil science as a natural science was established by the classical works of Dokuchaev. Previously, soil had been considered a product of physicochemical transformations of rocks, a dead substrate from which plants derive nutritious mineral elements. Soil and bedrock were in fact equated.
Dokuchaev considers the soil as a natural body having its own genesis and its own history of development, a body with complex and multiform processes taking place within it. The soil is considered as different from bedrock. The latter becomes soil under the influence of a series of soil-formation factors (climate, vegetation, parent material, relief and age). According to him, soil should be called the “daily” or outward horizons of rocks regardless of the type; they are changed naturally by the common effect of water, air and various kinds of living and dead organisms.”
– On Dokuchaev and soil science, as quoted in [3]

A Brief History of Soil Science before Dokuchaev

The earliest known soil classification system comes from China, appearing in the book Yu Gong (5th century BCE), where the soil was divided into three categories and nine classes, depending on its color, texture and hydrology. Very early concepts of soil were developed by the German chemist Justus von Liebig.[4] After several years, soil became known as some kind of static storage bin for plant nutrients — the soils could be used and replaced. Pioneering geologists then described soil as disintegrated rock of various sorts — granite, sandstone, glacial till, and the like and further described how the weathering processes modified this material and how geologic processes shaped it into landforms such as glacial moraines, alluvial plains, loess plains, and marine terraces. The first soil surveys were then performed to help farmers locate soils responsive to different management practices and to help them decide what crops and management practices were most suitable for the particular kinds of soil on their farms.

Born in  Milyukovo, Sychyovsky Uyezd, Smolensk Governorate, Russian Empire on March 1, 1846, Vasily Dokuchaev studied at the Imperial University of St. Petersburg, before he worked in the field of soil science, geology, mineralogy and geography. Geologist, geochemist and mineralogist Vladimir Ivanovich Vernadsky was one of his prominent students.[5]  From 1872 to 1878 Dokuchaev worked as a conservator at the Geological Cabinet of the University in St. Petersburg. After that, from 1874 to 1882, he acted as secretary of the Geological-Mineralogical Department of the St. Petersburg Natural Research Society. Between 1880 and 1896 he lectured on mineralogy and crystallography at his university, beginning in 1883 as a professor. In 1882 Dokuchaev was elected senior geologist to the Geological Committee and at the same time secretary of the Russian Subcommission for the Unification of Geological Terminology at the 2nd International Geological Congress. In 1888, he defended his dissertation on “Russian Black Earth” at St. Petersburg University, earning a doctorate in geology. His work was awarded by the St. Petersburg Academy of Sciences and received special recognition by the Imperial Free Economic Society (Вольное экономическое общество).

The Origins of Soil Science

Vasily Dokuchaev established soil science as a natural science discipline. Soil had been considered as a product of physicochemical transformations of rocks, a dead substrate from which plants derive nutritious mineral elements. During the 1870s, the Russian school of soil science under the leadership of Dokuchaev and Sibirtsev developed a new concept of soil. Russian workers began to conceive soils more as natural bodies with unique properties resulting from a combination of climate, living matter, parent material, relief, and time. It was further hypothesized that the soil’s properties reflected the combined effects of the particular set of genetic factors responsible for the soil’s formation. The Russian’s findings highly influenced the field through understanding that soils were not based on wholly on inferences from the nature of the rocks or from climate or other environmental factors, considered singly or collectively. Instead, the integrated expression of all these factors could be seen in the morphology of the soils. This also meant that all properties of soils should be considered collectively in terms of a completely integrated natural body.

The Father(s) of Soil Science

Due to his contributions to the field, Vasily Dokuchaev by many is considered the father of soil science. Contemporaries Friedrich Albert Fallou, the German founder of modern soil science, and Vasily Dokuchaev are both credited with being among the first to identify soil as a resource whose distinctness and complexity deserved to be separated conceptually from geology and crop production and treated as a whole. As a founding father of soil science Fallou has primacy in time. Fallou was working on the origins of soil before Dokuchaev was born, however Dokuchaev’s work was more extensive and is considered to be the more significant to modern soil theory than Fallou’s.

Next to developing soil science in Russia, he became one of the first persons to make wide geographical investigations of different soil types. He introduced the idea that geographical variations in soil type could be explained in relation not only to geological factors (parent material), but also to climatic and topographic factors, and the time available for pedogenesis (soil formation) to operate. Using these ideas as a basis, he created the first soil classification. His ideas were quickly taken up by a number of soil scientists, including Hans Jenny.  Dokuchaev’s late 19th century soil concept developed in the 20th century to one of soil as earthy material that has been altered by living processes. A corollary concept is that soil without a living component is simply a part of earth’s outer layer.