You are here: Home › chemistry › Robert Mulliken and the Molecular Orbitals 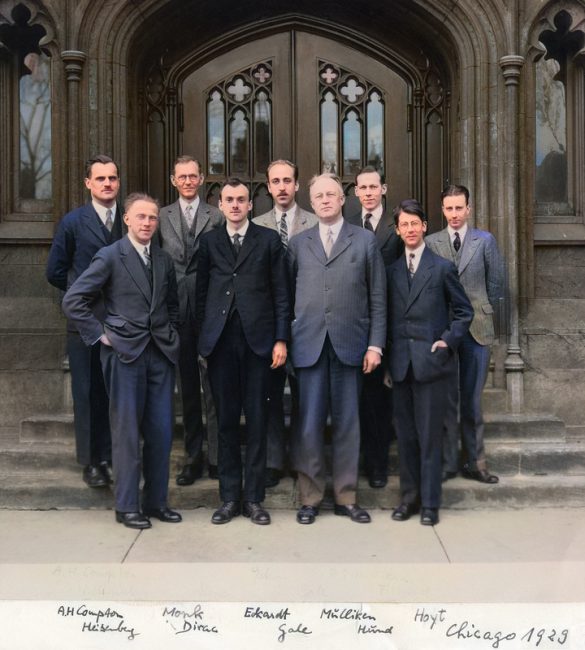 On June 7, 1896, American physicist, chemist, and Nobel Laureate Robert Sonderson Mulliken was born. He is primarily responsible for the early development of molecular orbital theory, i.e. the elaboration of the molecular orbital method of computing the structure of molecules.

Robert Mulliken truly followed in his father’s footsteps, who was a professor of organic chemistry at the Massachusetts Institute of Technology. While the young Robert Mulliken learned the name and botanical classification of plants, his excellent memory and general intelligence was noticed. He managed to learn the German language so well in younger years that he was allowed to skip the course in scientific German in college. His interest in chemistry grew early as well. Mulliken helped with some of the editorial work when his father wrote his four-volume text on organic compound identification. Already as an undergraduate student at MIT, he conducted his first publishable research on the synthesis of organic chlorides. When he graduated, the United States had just entered World War I and the young scientist was drafted into the Army’s Chemical Warfare Service. One year after the war, he entered the Ph.D. program at the University of Chicago and received his doctorate based on research into the separation of isotopes of mercury by evaporation. There, he was also introduced to the world of the old quantum theory by the Nobel Prize-winning physicist Robert A. Millikan.

Mulliken went to the University of Harvard in order to learn spectrographic technique from Frederick A. Saunders and quantum theory from E. C. Kemble. By that time, he was acquainted with several prominent scientists such as Robert Oppenheimer. In the later 1920s, he travelled through Europe to work with experts in quantum theory and spectroscopy like Schrödinger, Dirac, Born, Heisenberg, and Friedrich Hund, by whom he was highly influenced. Hund was back then the assistant of Max Born and had been working on quantum interpretation of band spectra of diatomic molecules, the same spectra which Mulliken had investigated at Harvard. They worked together in 1927 and as a result, both published the famous molecular orbital theory. It revolves around electrons, which are assigned to states that extend over an entire molecule. The theory became originally well known as the Hund-Mulliken theory, the term orbital was introduced by Mulliken in 1932 and about one year later, the theory had been accepted as valid and useful. However, the probably first quantitative use of molecular orbital theory was the 1929 paper of Lennard-Jones and in 1938, the British scientist Charles Coulson made the presumably first accurate calculation of a molecular orbital wavefunction on the hydrogen molecule.

With its description of the electron wave functions in molecules as delocalized molecular orbitals that possess the same symmetry as the molecule, Hund and Mulliken’s molecular-orbital method, including contributions by John Lennard-Jones, proved to be more flexible and applicable to a vast variety of types of molecules and molecular fragments, and has eclipsed the valence-bond method. As a result of this development, he received the Nobel Prize in Chemistry in 1966.

In the years after his masterpiece, Robert Mulliken taught at the New York University’s physics department. At this time, he was first recognized as a physicist as well and was appointed full professor at the University of Chicago in 1931. In 1936, he became the youngest member of the National Academy of Sciences. During World War II, he headed the Information Office for the University’s Plutonium Project from 1942 to 1945. In 1961 he became Distinguished Professor of Physics and Chemistry. He retired in 1985. He became a member of the American Philosophical Society in 1940. In 1965 he was admitted to the American Academy of Arts and Sciences. Robert Mulliken died on October 31, 1986 in Arlington, Virginia, at age 90.