You are here: Home › astronomy › Regiomontanus – Forerunner of Modern Astronomy 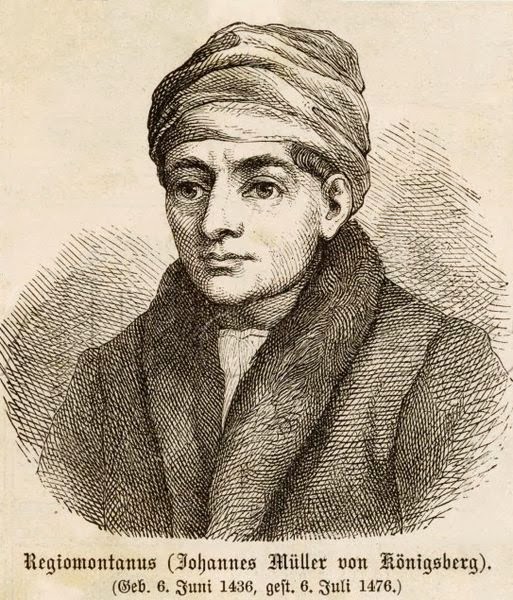 On June 6, 1436, German mathematician, astronomer, astrologer, translator, instrument maker and Catholic bishop Johannes Müller aus Königsberg was born, better known under the Latinized version of his name as Regiomontanus. His diligent and accurate observations, measurements and recordings paved the way for modern astronomers such as Tycho Brahe [4] and Nikolaus Copernicus.[5]

Johannes Müller from Königsberg, a small town in Lower Franconia, Germany, grew up in a well situated family, and got in touch with astronomical calculations very early. Historical scientists assume, that he had already plenty of knowledge at the age of 12. He then enrolled at the University of Vienna, which back then was one of the most important schools for mathematical and astronomical education. He became a pupil and friend of Georg von Peuerbach.[9] In 1452 he was awarded the bachelor degree (baccalaureus), and he was awarded his magister artium (Master of Arts) at the age of 21 in 1457. After graduating, Regiomontanus taught mathematics and philology. Major influences during his time in Vienna were the horoscopes he had to create for Frederick III. and his family as well as the humanism, of which he included elements in his lectures on planetary theories.

When cardinal Bessarion invited Regiomontanus and Peuerbach to Rome, but Peuerbach died unexpectedly in the same year, Regiomontanus finished to translate the famous Almagest by Ptolemy in 1463, wherefore his influence in Italy grew.[6] Later, under the title Epytoma in almagestum Ptolomei (Venice 1496), printed as a commented extract from the Almagest, it became one of the fundamental works for Renaissance astronomy used by Nikolaus Copernicus and Galileo Galilei. [7] During his time in Italy he also wrote De triangulis omnimodis (1462-1464, printed 1533), with which he founded modern trigonometry .In the following years, Regiomontanus accepted further scientific positions and translated more works into Latin. In 1467, he was occupied with establishing astronomical panels wherefore he constructed his own instruments for observation. A few years later he also improved Jacob’s staff, an instrument helping to measure angles before the sextant was invented.

In 1471 he moved to Nuremberg on behalf of Hungarian King Matthias in order to further improve the plates of the planetary movements there. Because of the flourishing instrument making and the good location he remained first as the king’s envoy, but later in his own decision. He now opened his own printing press, actually the first ever printing house dedicated to the printing and publishing of scientific books,[14] in which he wanted to produce his tables in the best quality. In 1474 he published his publishing program as a single-sheet print; he could complete 11 prints, further publications thwarted his early death. In 1472 he published Peuerbach‘s ‘Theoricae novae Planetarum and Manilius‘ teaching poem Astronomica. The Ephemerides (Ephemerides quas vulgo vocant almanac, a projection of the daily movements of celestial bodies, conjunctions and eclipses over the following 32 years) for the years 1475 to 1506 were almost ready printed (“… iam prope absoluta sunt“), as his publishing program announced in 1474. This printed set of tables served Christopher Columbus on his voyages of discovery overseas. 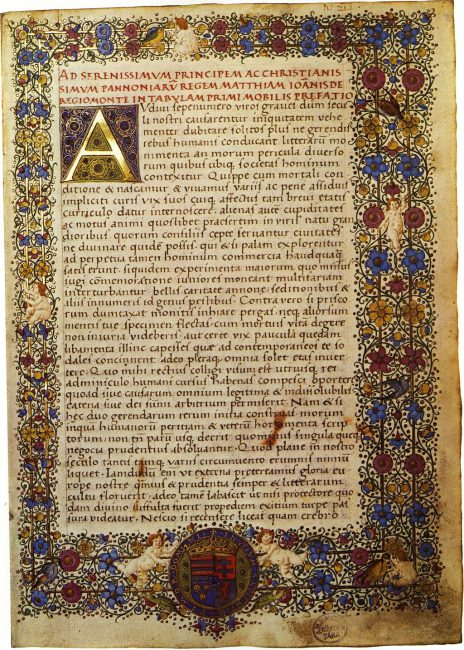 The Canones LXIII of Regiomontanus in a manuscript of the 15th century (before 1469) from the library of King Matthias Corvinus, to whom the author dedicated this work on the movement of the fixed stars.

Planetary Movement and Reformation of the Calender

In his following scientific works, Regiomontanus improved current works on planetary movements in Nuremberg. With his self built instruments, he was able to improve overall astronomical knowledge and intended to open printing works in order to publish his findings. But unfortunately his plan could not be realized before his early passing. Just before his death, Regiomontanus took part in the reformation of the calendar on invitation by Pope Sixtus IV and published his famous work ‘Calendarismus‘ in 1476. The Gregorian calendar reform with the unique omission of ten calendar days and the modification of the leap year regulation took place only over 100 years after his death.

Only one year later in 1476 he died (probably from an epidemic) at the age of only 40. According to Hartmann Schedel, he was buried on God’s Field (Ager dei), which probably means the Campo Santo Teutonico. However, according to legend, he was buried in the Pantheon. Regiomontanus is considered the most important mathematician (founder of modern trigonometry, among others) of his time and early reformer of the Julian calendar. Regiomontanus was a typical representative of Renaissance humanism: in his opinion, his own observation and comparison with the results of ancient science (Aristotle) should renew astronomy and help to find “the truth”. With this attitude he became, along with Nikolaus von Kues, the essential pioneer of the Copernican worldview.[8]