You are here: Home › space › Robert Goddard – the Man who ushered in the Space Age 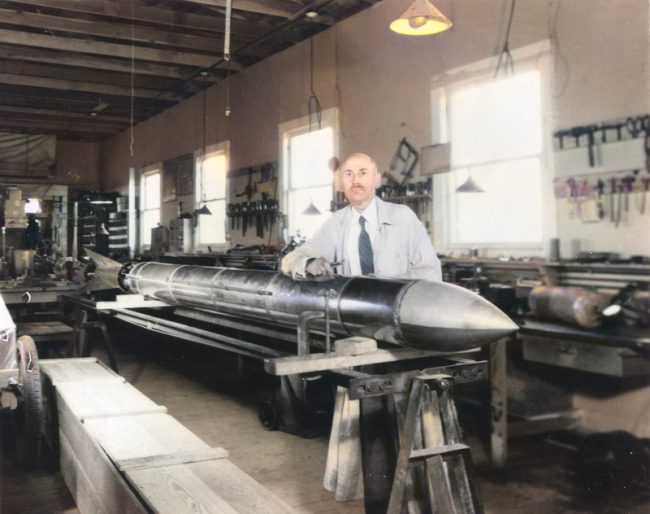 Goddard with a rocket in his workshop at Roswell, NM. October 1935.

On October 5, 1882, American physicist, and inventor Robert Hutchins Goddard was born. He is credited with creating and building the world’s first liquid-fueled rocket, which he successfully launched on March 16, 1926. Goddard’s work as both theorist and engineer anticipated many of the developments that were to make spaceflight possible. He has been called the man who ushered in the Space Age. Moreover, I’m pretty sure that you have heart of the Goddard Space Flight Center, a major NASA space science laboratory located in Greenbelt, Maryland. There is also a crater on the moon named after Goddard as well as the Blue Origin Goddard, a private spacecraft which first flew in November 2006.

“There can be no thought of finishing, for aiming at the stars, both literally and figuratively, is the work of generations, but no matter how much progress one makes there is always the thrill of just beginning.”
— Robert Goddard, in letter to H.G. Wells (Apr 1932)

Robert Goddard was born in Worcester, Massachusetts to Nahum Danford Goddard, a businessman, and Fannie Hoyt Goddard. Early in life, young Robert suffered from pulmonary tuberculosis which kept him out of school for long periods of time. However, he kept up with his studies and was an avid readers. It was after reading H.G. Wells’s “The War of the Worlds” that he first became interested in space exploration.[5] He experimented with chemicals and created a cloud of smoke and an explosion in the house. Goddard’s father further encouraged Robert’s scientific interest by providing him with a telescope, a microscope, and a subscription to Scientific American.

After graduating from school, Robert Goddard applied and was accepted at Worcester Polytechnic Institute. In 1907, while a student at Worcester Polytechnic Institute in Massachusetts, Goddard experimented on a rocket powered by gunpowder in the basement of the physics building. Clouds of smoke caused a lot of commotion and the faculty, rather than expel him, took an interest in his work. Goddard received his B.S. degree in physics from Worcester Polytechnic in 1908, and after serving there for a year as an instructor in physics, he began his graduate studies at Clark University in Worcester in the fall of 1909. Goddard received his M.A. degree in physics from Clark University in 1910, and then stayed at Clark to complete his Ph.D. in physics in 1911. He spent another year at Clark as an honorary fellow in physics, and in 1912, he accepted a research fellowship at Princeton University’s Palmer Physical Laboratory.

Unfortunately, in early 1913, Goddard became seriously ill with tuberculosis, and had to leave his position at Princeton. He then returned to Worcester, where he began a prolonged process of recovery. In 1914, his first two landmark patents were accepted and registered. The first described a multi-stage rocket fueled with a solid “explosive material.” The second described a rocket fueled with a solid fuel (explosive material) or with liquid propellants (gasoline and liquid nitrous oxide). The two patents would eventually become important milestones in the history of rocketry. Overall, he published 214 patents, some posthumously by his wife.

Goddard’s thoughts on space flight started to emerge in 1915, when he theorized that a rocket would work in a vacuum, and didn’t need to push against air in order to fly. This meant that in the vacuum of space, rocket engines would be able to produce thrust. At his own expense, he began to make systematic studies about propulsion provided by various types of gunpowder. He began experiments on the efficiency of rockets. He bought some commercial rockets and measured their thrust using a ballistic pendulum, a heavy mass suspended by ropes, to which the rocket was attached. The rocket was fired, and the height to which the pendulum rose provided a measure of the total momentum (mass times velocity) imparted to it. Goddard also used an equivalent set-up, where the mass pushed against a spring, instead of being suspended.[3]

A Rocket to Probe the Upper Atmosphere

Goddard turned his attention to the components of his rockets. A Swedish engineer, Gustav De Laval, had designed a turbine for a steam engine that implemented a new kind of nozzle to blow jets of steam onto the wheel. The nozzle first narrowed, then expanded, allowing the steam to reach the speed of sound and creating an efficient conversion of heat to motion. By replacing his existing nozzle with the De Laval nozzle, Goddard’s rockets were able to increase their efficiency to up to 63 percent. In 1917, Goddard received a $5,000 grant from the Smithsonian Institution in Washington, D.C., to support his development of a rocket to probe the upper atmosphere. Clark University also contributed financially, and Goddard had permission to use their lab and the lab at Worcester Polytechnic Institute for experimentation.[4]

From Powder to Liquid

Powder rockets were still problematic. Goddard returned to an idea he first developed in 1914 for a liquid-fueled rocket. Hermann Oberth in Germany and Konstantin Tsiolkovsky in Russia had both reached the same conclusion.[6] Working independently — with no apparent knowledge of one another’s research — they made similar developments in the field of rocket science. All three are considered to be the fathers of modern rocketry. Goddard’s rocket relied on a combination of gasoline and liquid oxygen. Two lines ran into the combustion chamber. To overcome the high temperatures required for the combustion of pure oxygen, Goddard designed the extremely cold liquid oxygen to cool the combustion chamber as it traveled from the fuel tank, a method still used today. 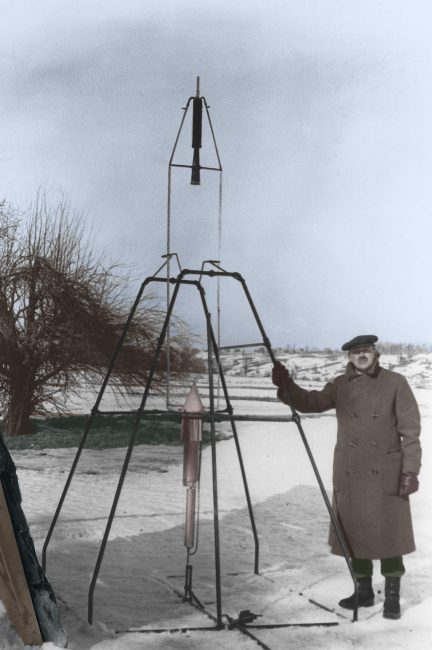 Indeed, the flight of Goddard’s rocket on March 16, 1926, at Auburn, Mass., was as significant to history as that of the Wright brothers at Kitty Hawk. Primitive in their day as the achievement of the Wrights, Goddard’s rockets made little impression on government officials. Only through modest subsidies from the Smithsonian Institution and the Daniel Guggenheim Foundation, as well as the leaves of absence granted him by the Worcester Polytechnic Institute of Clark University, was Goddard able to sustain his lifetime of devoted research and testing.[1]

Goddard moved to Roswell, New Mexico, in the 1930s, where he continued to work on his rockets over the course of his lifetime. The open desolation provided the perfect place to work on his rockets in safety, and he launched 31 rockets over 15 years. Goddard was able to flight-test many of his rockets, but many resulted in what the uninitiated would call failures, usually resulting from engine malfunction or loss of control. But Goddard never lived to see his dream of a rocket traveling into space. Robert Goddard died of throat cancer at his home in Baltimore on Aug. 10, 1945, twelve years before the launch of the Russian satellite, Sputnik.

At yovisto academic video search, you can learn more about the future of the US space program in the TED talk of Bert Rutan on “The Future of Space“.