You are here: Home › cinematography › The Adventures of Buck Rogers 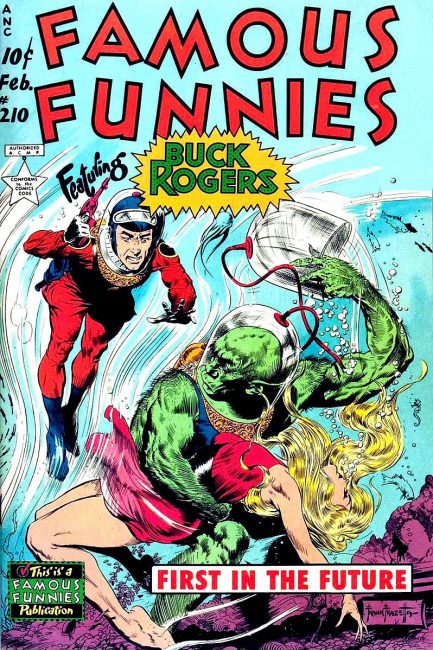 “I, BUCK ROGERS, am the only man alive, so far as I know, whose normal span of life has been spread over a period of five centuries. I was 20 years old when the great World War of 1914-1918 ended and I was mustered out of the Air Service, where I have served for eighteen months on the battle front of France as a Pursuit Pilot. Soon after returning home I got a job surveying the low levels of an abandoned mine located near a great city. Deep in this mine, I was cut off from return by a cave-in, and succumbed to a curious and unidentified radio-active gas I had descended to study. I sank into a state of suspended animation in which I was “preserved” in all my youth and vigor until,  five hundred years later, some shifting of strata once more let air into the ancient workings — and I awoke. “
– Phil Nolan & Dick Calkins, Buck Rogers, 25th century A.D., (1933)

The Birth of a Space Hero

Rogers made his first appearance as Anthony Rogers in Nowlan’s Armageddon 2419 A.D. The character was born in 1898 and became a veteran of the Great War. He started working for the American Radioactive Gas Corporation investigating reports of unusual phenomena in abandoned coal mines near Wyoming Valley in Pennsylvania in the 1920s. Unfortunately, Rogers was exposed to radioactive gas and fell into some sort of suspended animation for almost 500 years. Waking up in 2419, Rogers wanders around, thinking he had only been asleep for a few hours. However, he meets Wilma Deering and she invites him to her gang. Their leader struggles with the Hans who rule North America from 15 great cities they established across the continent. They ignored the Americans who were left to fend for themselves in the forests and mountains as their advanced technology prevented the need for slave labor. In the sequel,, six months have passed and the hunter is now the hunted. Rogers is now a gang leader and his forces, as well as the other American gangs, have surrounded the cities and are attacking constantly. The airlords are determined to use their fleet of airships to break the siege. In 1933, Nowlan and Calkins co-wrote Buck Rogers in the 25th Century, a novella that retold the origin of Buck Rogers and also summarized some of his adventures.

The Buck Rogers in the 25th Century A.D. comic strip debuted on January 7, 1929, on the same day the Tarzan comic strip debuted. In the comic, he also meets Wilma and is admitted to her gang. A Sunday strip was later added to Buck Rogers’ daily strip and was reprinted in Big Little Books. Buck Rogers became famous enough to also inspire further newspaper syndicates to launch their own science fiction strips, the most popular probably being Flash Gordon, Jack Swift, Don Dixon and the Hidden Empire, as well as John Carter of Mars.

The Buck Rogers radio program started in 1932 and is assumed to be the first science-fiction program on radio. In the show, Buck also found himself in the 25th century and the actors Matt Crowley, Curtis Arnall, Carl Frank and John Larkin all voiced him at various times. The show was known for its sound effects: a regiment of marching robots, the impact of a rocket ship on the ground and others. This daily 15-minute serial was sponsored by Kellogg in its early years and was an outstanding success. This also resulted in an extensive marketing of the comic motifs via the toy market: robots, beam pistols, tin rockets and doll actors as well as board games, card games and watches with Buck Rogers cover (merchandising products) were to be purchased. Buck Rogers was as well known in the United States as Mickey Mouse, Donald Duck or Superman. Many later SF authors and filmmakers grew up as children or teenagers with the Buck Rogers strips and radio shows of the 1930s, a time when American SF literature was only emerging after Hugo Gernsback founded Amazing Stories magazine in 1926 and reprinted stories by Jules Verne and H. G. Wells.[3,4,5]

A ten-minute Buck Rogers film premiered during the 1933-1934 World Exposition in Chicago. It was entitled: Buck Rogers in the 25th Century: an Interplanetary Battle with the Tiger Men of Mars. In 1939 Buck Rogers was filmed as 12-part Matinee-Serial. Here Buster Crabbe, who also played the leading role in Flash Gordon, played the role of Buck. An American television series was produced between 1950 and 1951, the recordings of which are now considered lost. In imitation of the great cinema success of Star Wars (1977), producer Glen A. Larson took up the genre “Space Opera” and produced Battlestar Galactica (1978) as a pilot for an American television series. Some of the models and costumes used were later used by him for the movie Buck Rogers in the 25th Century (1979), also a pilot of a TV series.

Buck Rogers’ name has become proverbial in such expressions as “Buck Rogers outfit” for a protective suit that looks like a space suit. For many years, all the general American public knew about science fiction was what they read in the funny papers, and their opinion of science fiction was formed accordingly. Another phrase in common use before 1950 was for deriding science fiction fans about “that crazy Buck Rogers stuff“. Buck Rogers’ influence on popular culture is quite large. Rogers’ comic strip is featured in Steven Spielberg’s blockbuster Sci-fi movie, E.T. the Extra-Terrestrial. ET is inspired to create a makeshift communicating device by copying Buck Rogers. In 1999, the series Futurama was highly influenced by themes and characters from the Buck Rogers comic strip.