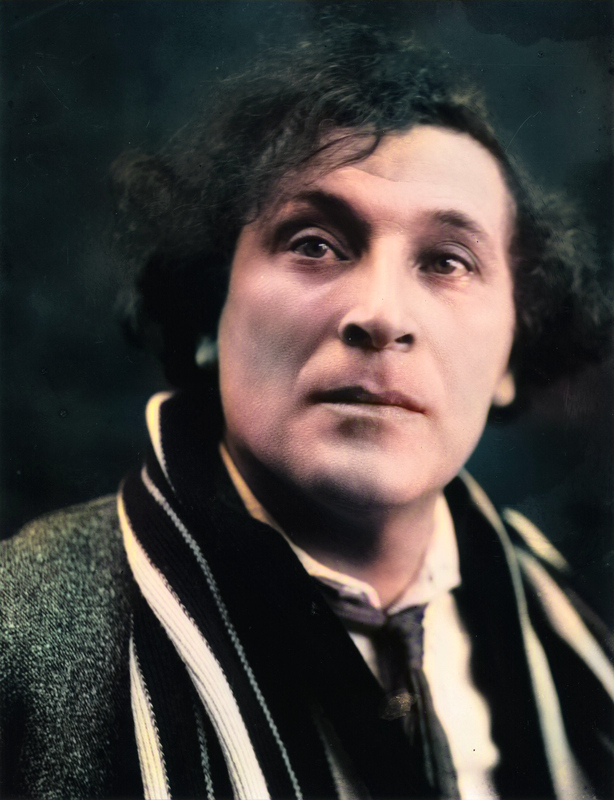 On July 6, 1887, Russian-French artist Marc Chagall was born. Being an early modernist, he was associated with several major artistic styles and created works in virtually every artistic medium, including painting, book illustrations, stained glass, stage sets, ceramic, tapestries and fine art prints. Using the medium of stained glass, he produced windows for the cathedrals of Reims and Metz, windows for the UN, and the Jerusalem Windows in Israel. He also did large-scale paintings, including part of the ceiling of the Paris Opéra.

Marc Chagall was highly influenced by the culture of Hasidic Judaism. Chagall scholar Susan Tumarkin Goodman describes the links and sources of his art to his early home: “Chagall’s art can be understood as the response to a situation that has long marked the history of Russian Jews. Though they were cultural innovators who made important contributions to the broader society, Jews were considered outsiders in a frequently hostile society… Chagall himself was born of a family steeped in religious life; his parents were observant Hasidic Jews who found spiritual satisfaction in a life defined by their faith and organized by prayer.“

Chagall studied Hebrew and the Bible at a Jewish school and was able to attend a Russian high school even though this was prohibited for Jews in Russia at the time. There, Marc Chagall probably made his first contact with art, starting to copy images from books. Eventually he decided to become a painter  and in 1906 he had noticed the studio of Yehuda Pen, a realist artist who also operated a small drawing school in Vitebsk, which included the future artists El Lissitzky and Ossip Zadkine. Pen offered to teach him free of charge. However, after a few months at the school, Chagall realized that academic portrait painting did not suit his desires. Despite the difficulties Jews faced during this period in Russia, Chagall decided to integrate his Jewish roots into his art as part of his self expression.

“I am working in Paris. I cannot for a single day get the thought out of my head that there probably exists something essential, some immutable reality, and now that I have lost everything else (thank God, it gets lost all on its own) I am trying to preserve this and, what is more, not to be content. In a word: I am working.”
– Mark Chagall, in a letter to A. N. Benois, 1911

Characteristic works by Chagall from this period of early maturity are The Dead Man and My Fiancée with Black Gloves. Around 1910, Chagall went to Paris and moved into a studio on the edge of town in the ramshackle settlement for bohemian artists that was known as La Ruche. There, Marc Chagall met Robert Delaunay,[4] Albert Gleizes, Jean Metzinger, Fernand Léger, and André Lhote. The period he spent in Paris are often considered as Chagall’s best phase, represented by works like Self-Portrait with Seven Fingers, Calvary, The Fiddler, and Paris Through the Window. Back then, his colors were beginning to show the characteristic complexity and resonance he would eventually achieve.

Marc Chagall had his first solo show in Berlin in 1914, in the gallery of the Modernist publication Der Sturm, and he made a strong impression on German Expressionist circles. He moved back to Moscow during the First World War and turned his attention for a while to the stage, producing the sets and costumes for plays by the Jewish writer Sholem Aleichem and murals for the Kamerny Theatre. Leaving Russia for good in the 1920s, Marc Chagall first went to Berlin, then settling for Paris. Chagall’s work became more obviously poetical and popular with the general public during the 1920s and 1930s, e.g. The Circus and Eiffel Tower.

During World War 2, Mac Chagall worked in Brittany, Holland, Spain, Poland, and Italy. In 1931, his autobiography, My Life, was published. In 1941, his family took refuge in New York City. In 1945 Chagall designed the backdrops and costumes for a New York production of Igor Stravinsky’s ballet The Firebird. He was honoured with a large retrospective exhibition at the Museum of Modern Art in New York in 1946 and at the Art Institute of Chicago a few months later. However, in 1948, the artist settled again in France, first in the suburbs of Paris and finally on the French Riviera at Venice and nearby Saint-Paul. Between 1953 and 1956, without forgetting his native Vitebsk, he produced a series of paintings inspired by his affection for Paris.

Mac Chagall mastered the difficult art of stained glass in the late 1950s, and he designed a number of windows at international locations such as the Cathedral of Metz in France, the synagogue of the Hadassah-Hebrew University Medical Center in Jerusalem, the United Nations building in New York, and and the Art Institute of Chicago. During his last years as an active artist, Marc Chagall remained involved in theatre design, completing a number of projects for the Paris Opéra and the New York Metropolitan Opera, including his highly regarded set and costume designs for the 1967 production of Mozart’s The Magic Flute.[5]