You are here: Home › meteorology › Vincent Schaefer and the Invention of Cloud Seeding 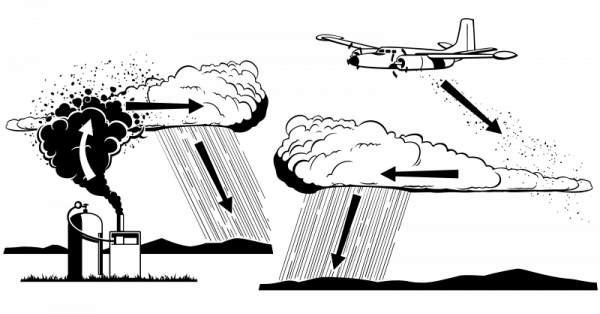 On July 4, 1906, American chemist and meteorologist Vincent Joseph Schaefer was born. Schaefer is best known for his research in meteorology and weather control introduced cloud seeding. On 13 Nov 1946, he flew over Mount Greylock in Massachusetts, successfully seeding clouds with pellets of dry ice (solid carbon dioxide) to produce the first snowstorm initiated by man.

During his 20s, Vincent Schaefer began to built up a personal library on natural history, and science, and established groups sharing his interests, e.g. the Mohawk Valley Hiking Club, and the Van Epps-Hartley Chapter of the New York Archaeological Association. In order to support the family income Schaefer left high school and joined a four-year apprentice machinist course at General Electric. During his second year there Schaefer was granted a one-month leave to accompany Dr. Arthur C. Parker, New York State Archaeologist, on an expedition to central New York. After his apprenticeship, Vincent Schaefer worked at the machine shop at the General Electric Research Laboratory as a toolmaker. At the Research Laboratory machine shop, Schaefer built equipment for Langmuir and his research associate, Katharine B. Blodgett. As a research assistant, Vincent Schaefer published many reports on the areas he studied, which included surface chemistry techniques, electron microscope techniques, polarization, the affinity of ice for various surfaces, protein and other monolayers, studies of protein films, television tube brightness, and submicroscopic particulates. An example of Schaefer’s lasting contribution to surface science is the description in 1938 of a technique developed by him and Langmuir (later known as the Langmuir–Schaefer method) for the controlled transfer of a monolayer to a substrate, a modification of the Langmuir–Blodgett method.

Before World War 2 started, Schaefer was made research associate and continued his work with Langmuir, which included research on gas mask filtration of smokes, submarine detection with binaural sound, and the formation of artificial fogs using smoke generators — a project which reached fruition at Vrooman’s Nose in the Schoharie Valley with a demonstration for military observers. Schaefer also became internationally recognized for the development of a method to make replicas of individual snowflakes using a thin plastic coating

Rainmaking in the Laboratory

Around 1943, Vincent Schaefer performed many experiments at Mount Washington Observatory in New Hampshire, where he started to find his “cold box” too warm for some laboratory tests he wanted to perform. Determined to get on with his work, he located some dry ice and placed it into the bottom of the “cold box.” Creating a cloud with his breath he observed a sudden and heretofore unseen bluish haze that suddenly turned into millions of microscopic ice crystals that dazzled him in the strobe lit chamber. He had stumbled onto the very principle that was hidden in all previous experiments. He discovered the stimulating effect of a sudden change in heat/cold, humidity, in supercooled water spontaneously producing billions of ice nuclei. Through scores of repeated experiments he quickly developed a method to seed supercooled clouds with dry ice.

In November 1946, Schaefer conducted a successful field test seeding a natural cloud by airplane, with dramatic ice and snow effects. he resulting publicity brought an abundance of new correspondence, this time from people and businesses making requests for snow and water as well as scientists around the world also working on weather modification to change local weather conditions for the better. Schaefer’s discovery also led to debates over the appropriateness of tampering with nature through cloud seeding. In addition, the successful field test enabled Langmuir to obtain federal funding to support additional research in cloud seeding and weather modification by the GE Research Laboratory. Schaefer was coordinator of the laboratory portion of Project Cirrus while the Air Force and Navy supplied the aircraft and pilots to carry out field tests and to collect the data used at the Research Laboratory. Field tests were conducted in the Schenectady area as well as in Puerto Rico and New Mexico.

Schaefer helped found the Atmospheric Sciences Research Center (ASRC) in 1960 and served as its Director of Research until 1966 when he became Director. Schaefer brought highly qualified atmospheric science researchers to ASRC, many of whom he had met through his work at GE and Munitalp. Bernard Vonnegut, Raymond Falconer and Duncan Blanchard were all veterans of Project Cirrus who joined Schaefer at ASRC. During his years at ASRC, in addition to the NSI summer programs, Schaefer led annual research expeditions to Yellowstone National Park for atmospheric scientists to work in the outdoor laboratory it provided each January. In the 1970s Schaefer’s own research interests focused on solar energy, aerosols, gases, air quality, and pollution particles in the atmosphere. His work in some of these areas culminated in a three-part report on Air Quality on the Global Scale in 1978.