You are here: Home › women in technology › Road Trippin’ with Alice Ramsey 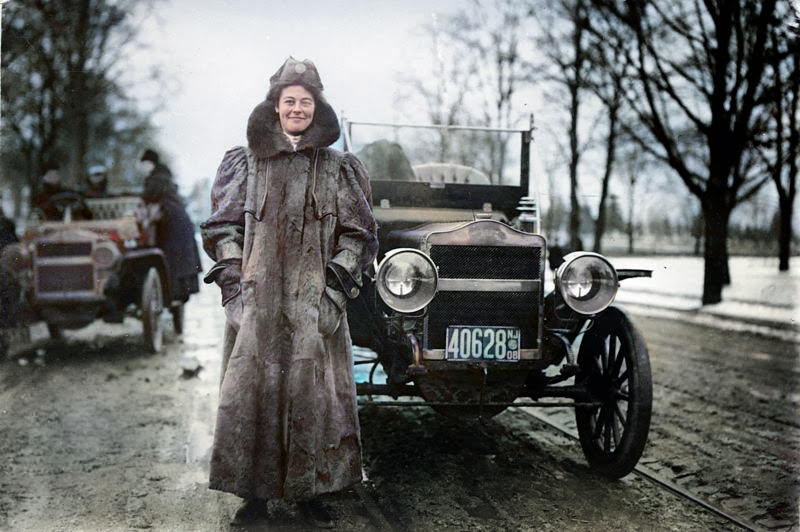 On August 7, 1909, Alice Ramsey together with her companions reached San Francisco, successfully finishing the first crossing of the USA with an automobile by a woman. She arrived at San Francisco 60 days after her start in New York.

The Journey of Alice Ramsey

Alice Ramsey’s journey began on June 9, 1909 in New York City. The four women got ready for a last photo shoot and kissed their husbands good bye before they drove off in a 30 horsepower Maxwell DA to experience probably the biggest adventure of their lives. Back then women were not really encouraged to drive as well, even though Bertha Benz set new standards as the first women to travel a long distance by car in 1888.[5] However, John Ramsey, the driver’s husband purchased her a car in order to travel more safely than with her moody horse and in the same summer she drove more than 6000 miles. Ramsey enjoyed the dirt highways and began taking part in endurance drives during the same year. The car company Maxwell-Briscoe then came up with the idea that Ramsey could drive across the United States to prove that anyone (meaning even women) could drive long distances with a Maxwell car.

Before taking off, Ramsey had to learn several safety basics like changing tires and she had to find a crew, accompanying her on the road. Ramsey chose her sisters-in-law, being in the mid 40’s and her 16 year old friend. They did not even arrive Ohio yet, and already reached speeds of 42 miles an hour. Soon they needed to change their first tires and people began yelling they should better continue on horses.

After ten days, Ramsey reached Chicago. Ramsey and her passengers were greeted happily in the cities. During the next stretch to Iowa, however, the women suffered from continuous rain, which turned the dirt roads into hardly passable mud tracks. Shortly before Sioux City, the rear axle of the Maxwell broke. Ramsey had to take a three-day break, but was able to continue the journey on July 6th. The poor road conditions also led to repairs on the vehicle on the following days, so that Ramsey only reached Cheyenne, Wyoming, on July 14.

When reaching the Midwest, more car issues evolved like running out of gas or out of water for the transmission. However, they always found workarounds. Most of the time, the roads were in a bad shape and the women had to sleep in the car, which stuck in the mud. As you may imagine, long distance journeys were not common back then, wherefore the women could not rely on precise maps, a challenge they also had to manage throughout the trip. 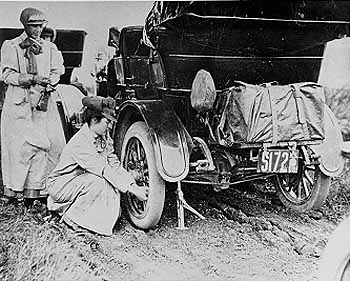 On July 17, the ascent to the Rocky Mountains began, which according to Ramsey proved to be less arduous but also less scenic. After only four days, the women reached Salt Lake City, where they had the Maxwell cleaned and repaired. As they continued their journey through the Rocky Mountains, the car crashed into a ditch. Ramsey had to have a new axle made in Salt Lake City. Due to the delays, her companions travelled ahead by train, and Ramsey made the arduous journey to Nevada alone with a representative of Maxwell-Briscoe. On this section Alice Ramsey met a group of Indians who showed little interest in her and the car.

From Reno to San Francisco

On August 4, Alice Ramsey and her companions left the town of Reno for the last stage of their journey. Via Lake Tahoe we ascended into the Sierra Nevada, from where we continued to California. For the first time since Chicago, Ramsey was able to drive on paved roads again. The journey from Sacramento to Oakland finally became a triumph for Ramsey and her friends, her Maxwell was escorted by numerous enthusiastic drivers. They crossed the bay of San Francisco by ferry and finally reached their destination San Francisco 60 days after starting in New York on August 7, 1909.

The public caught on the event quickly and sometimes people began traveling next to her on horses or own cars for a few miles, showing support. The women were astonished by the countryside the United States had to offer. When reaching California, the admiration and fascination came from both sides. The crew enjoyed the trees and plant they had never seen before and the local media produced headlines like “Pretty Women Motorists Arrive After Trip Across the Continent“.

And back by Train again

The women returned home by train where the 22 year old continued raising her children next to driving further long distances in America and even Europe. Alice Ramsey remained true to the automobile sport, but after the birth of her second child, she decided not to go on long-distance trips. It was not until 1919 that she made a second trip from the east to west coast of the United States. She repeated the trips almost every year into old age.

At yovisto academic video search, you may enjoy a video lecture on Cars that Think by Raul Rojas at TED Brussels.