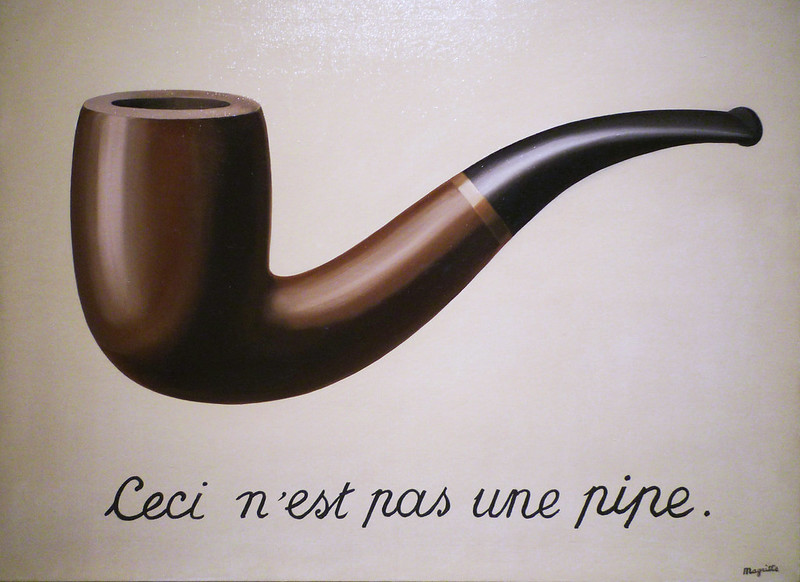 On November 21, 1898, Belgian surrealist artist Rene Magritte was born. He became well known for a number of witty and thought-provoking images that fall under the umbrella of surrealism. His paintings have become student poster classics and his work challenges observers’ preconditioned perceptions of reality. Personally, I really like the paintings of Rene Magritte and I always refer to that special one above in my lectures on semantics. Actually there is also another version of the picture showing an apple ant the text ‘Ceci n’est pas une pomme‘ (which I can’t show you since there are property rights restrictions). Usually, I first show the picture of an apple to the students and ask ‘What is this?‘. Not used to being asked stupid questions in a computer science lectures it usually takes a while until one of the students will give the answer ‘an apple’. Then I grab into my bag and present a real apple asking ‘…and what is this?‘. Now the students are kind of surprised, and this is the starting point to talk about signs, language, semiotics, cognition, and semantics. But let’s get back to Rene Magritte and his work.

“With regard to my painting, the word ‘dream’ is often misunderstood. My works do not belong to the dream world, on the contrary. When it comes to dreams in this context, they are very different from those we have in our sleep. They are rather self-intended dreams in which nothing is as vague as the feelings one has when fleeing to sleep. Dreams that don’t want to put you to sleep, but to wake you up.” – René Magritte

René Magritte was the first-born son of the tailor Leopold Magritte and the hatter Régina Bertinchamp. He had two brothers, Raymond, born in 1900, and Paul, born in 1902. In 1910, the Magritte family moved to Châtelet, where René Magritte began painting and drawing at the age of twelve. His mother took her own life in 1912 for unknown reasons, drowning herself in the Sambre at night. For the young Magritte, who was present when she was pulled out of the water, this was a traumatic event. However, recent research has discredited this story, which may have originated with the family nurse. When his mother was found, her dress was covering her face, an image that has been suggested as the source of several of Magritte’s paintings in 1927–1928 of people with cloth obscuring their faces. The father then moved with his three sons to Charleroi, an industrial town where life was very hard. There, René attended high school and fled to the world of Fantômas novels and literature by Robert Louis Stevenson,[5] Edgar Allan Poe,[6] Maurice Leblanc and Gaston Leroux.

In 1913 he met Georgette Berger (1901-1986), two years younger than him, who also became his model. It was at this time that he created his first works, whose style was impressionistic. Magritte studied at the Brussels Academy of Fine Arts from 1916 to 1918. During his studies he created works with a cubistic-futuristic touch, some of which look very similar to those of the “Cologne Progressive”. From December 1920 until September 1921, Magritte served in the Belgian infantry in the Flemish town of Beverlo near Leopoldsburg. He met Georgette Berger again by chance in 1920 in the Brussels Botanical Garden. He married her in 1922 and earned his living as a model draughtsman in a wallpaper factory and from 1923 as a poster and advertising draughtsman. In 1923 he sold his first painting, a portrait of the singer Evelyne Brélia. The paintings he produced during the years 1918–1924 were influenced by Futurism. Most of his works of this period are female nudes. 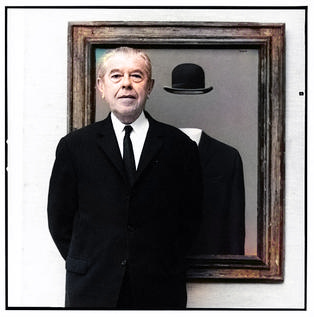 Painting the Objects only with their Obvious Details

Magritte had met the later art dealer and artist E. L. T. Mesens in 1920 as his brother Paul’s piano teacher. Mesens introduced him to the Dadaist movement, and in 1925 Magritte became a member of the Œsophage magazine, the following year Marie. Magritte decided to “paint the objects only with their obvious details“. It was not until 1926 that he was able to concentrate exclusively on artistic production through fixed contracts with the Brussels gallery “Le Centaure“, whereby his first surrealist painting, The lost Jockey, (Le jockey perdu), was created that year. In 1927 he had his first solo exhibition at the gallery “Le Centaure” with predominantly abstract paintings. Key images of his mysterious “Black Period” are those with large black male figures. The Man of the Sea or The Thief from 1927 belong to those works whose inspiration is based on the film hero Fantomas. In the same year he moved to Le-Perreux-sur-Marne near Paris, where he lived until 1930. In Paris he received a lot of inspiration from the French Surrealists, especially the metaphysical pictures of Giorgio de Chirico. Chirico’s Song of Love is often mentioned as a work that left a special impression on Magritte.

From 1930 Magritte lived again in Brussels as the centre of a circle of friends interested in culture. In 1932 E. L. T. Mesens became his art dealer after the closure of the gallery “Le Centaure“. He made friends with André Breton, Paul Éluard, Joan Miró, Hans Arp and later also with Salvador Dalí. He was represented with several works in the Exposition Internationale du Surréalisme, which took place in 1938 at the Galerie Beaux-Arts in Paris. He was also friends with the screenwriter Claude Spaak, whose wife Suzanne Spaak was portrayed by him. In 1946 he signed a contract with the gallery owner Alexander Iolas, who promoted his work in the USA and motivated him to engage in sculpture. In 1947 Magritte had his first exhibition in New York.

During the German occupation of Belgium in World War II Magritte remained in Brussels, which led to a break with his friend Breton. He briefly adopted a colorful, painterly style in 1943–44, an interlude known as his “Renoir Period“, as a reaction to his feelings of alienation and abandonment that came with living in German-occupied Belgium. In 1946, renouncing the violence and pessimism of his earlier work, he joined several other Belgian artists in signing the manifesto Surrealism in Full Sunlight. During 1947-48, Magritte’s “Vache Period“, he painted in a provocative and crude Fauve style. During this time, Magritte supported himself through the production of fake Picassos, Braques and Chiricos – a fraudulent repertoire he was later to expand into the printing of forged banknotes during the lean postwar period. But, in 1948, he returned to the style and themes of his prewar surrealistic art until his death in 1967.

From 1929 to 1966, he worked as an editor for several magazines and newspapers, made several short films, was inspired again by the Impressionists, joined and resigned from the Belgian Communist Party several times and gave lectures on his work. From the sixties onwards, Magritte’s painting and thinking exerted an important influence on movements such as Pop Art and Conceptual Art. In 1956 he won the Guggenheim Prize for Belgium. In 1959 René Magritte participated in documenta II in Kassel. In 1967 it was suggested to him to have several of his paintings executed as sculptures. He drew the designs, made the moulds and signed the models. René Magritte died unexpectedly of cancer in his Brussels apartment on August 15, 1967. He found his final resting place in a cemetery in Schaarbeek. His last painting remained unfinished on the easel until the death of his wife in 1986. Throughout his life he led a very middle-class existence and hardly left his hometown. René Magritte’s artistic work was aimed at clarifying reality (for example: This is not an apple 1964, The Betrayal of Pictures 1928/1929) and emphasizing that the picture is just a picture and that one cannot eat even the most beautiful painted apple and the clearly and distinctly painted pipe can neither stuff nor smoke. On the other hand, Magritte was anxious to give the everyday and familiar something unexpected.