You are here: Home › literature › The Mysterious Death of Edgar Allan Poe

On October 7th, 1849, the great American author and poet, Edgar Allan Poe, best known for his stories of the mysterious and macabre, died under mysterious circumstances. With his short stories and poems, Edgar Allan Poe succeeded to capture the imagination and interest of readers around the world until the present day. With his creative and imaginative he even started completely new literary genres, earning him the nickname “Father of the Detective Story“. His life, however, has become a bit of mystery itself. And the lines between fact and fiction have been blurred substantially since his death.

“I need scarcely observe that a poem deserves its title only inasmuch as it excites, by elevating the soul. The value of the poem is in the ratio of this elevating excitement. But all excitements are, through a psychal necessity, transient.”
— Edgar Allan Poe, The Poetic Principle (1850)

Born on January 19, 1809 in Boston as son of actors, Poe never really knew his parents. While his father left the family early on, his mother passed away when he was only three years old. Separated from his siblings, Poe went to live with John and Frances Allan in Richmond, Virginia. He and Frances seemed to form a bond, but he never quite connected with John. Preferring poetry over profits, Poe reportedly wrote poems on the back of some of Allan’s business papers. When Poe went to the University of Virginia in 1826, he didn’t receive enough funds from Allan to cover all his costs. He decided to trying to cover the difference by gambling, but ended up in total debt. When he returned home, his fiancée Elmira Royster had become engaged to someone else and left him heartbroken and frustrated. 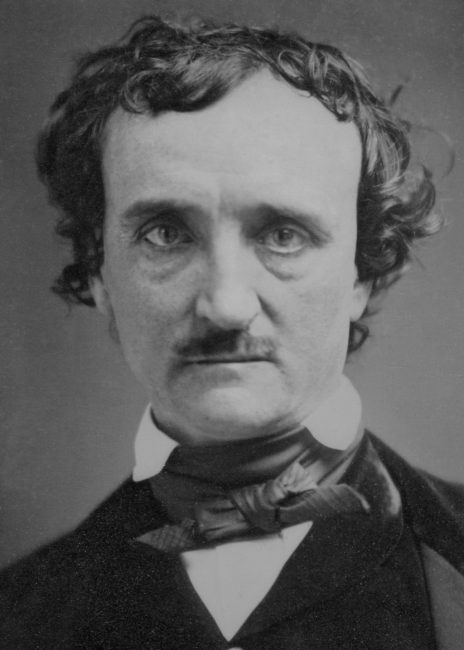 In 1827 Poe joined the army, while he had published his first book ‘Tamerlane and Other Poems‘. At the military academy in West Point, he was kicked out after a year for his poor handling of his duties. Poe focused his writing full time and finally succeeded in becoming the first writer in the US to live alone from his writings. From 1831 to 1835, he stayed in Baltimore with his aunt Maria Clemm and her daughter Virginia, who became a literary inspiration and finally his wife in 1836 aged only 13. As a writer for the Southern Literary Messenger, he developed a reputation as a cut-throat critic, writing vicious reviews of his contemporaries.

In late 1830s, Poe published ‘Tales of the Grotesque and Arabesque‘, a collection of stories containing some of his best knowns pieces such as  ‘The Fall of the House of Usher‘,  and ‘Ligeia‘. In 1841 Poe launched the new genre of detective fiction with ‘The Murders in the Rue Morgue‘. But his most prominent and successful piece of work was the 1845 publication of the poem ‘The Raven‘, exploring death and loss as two common topics of his work.[5]

In 1847 Poe was overcome by grief after the death of his beloved Virginia. While he continued to work, he suffered from poor health and struggled financially. His final days remain somewhat of a mystery. He left Richmond on September 27, 1849, and was supposedly on his way to Philadelphia. On October 3, Poe was found unconscious lying in a gutter in Baltimore. Soon after he passed away on October 7, 1849, with his last words “Lord, help my poor soul”. His actual cause of death has been the subject of endless speculation. Some experts believe that alcoholism led to his demise while others offer up alternative theories. Rabies, epilepsy, carbon monoxide poisoning are just some of the conditions thought to have led to the great writer’s death.

A Dream within a Dream (1848)
Take this kiss upon the brow! And, in parting from you now, Thus much let me avow — You are not wrong, who deem That my days have been a dream;Yet if hope has flown away In a night, or in a day, In a vision, or in none, Is it therefore the less gone? All that we see or seem Is but a dream within a dream.

I stand amid the roar Of a surf-tormented shore, And I hold within my hand Grains of the golden sand — How few! yet how they creep Through my fingers to the deep, While I weep — while I weep! O God! can I not grasp Them with a tighter clasp? O God! can I not save One from the pitiless wave? Is all that we see or seem But a dream within a dream?

A Congestion of the Brain

Newspapers at the time reported Poe’s death as “congestion of the brain” or “cerebral inflammation”, common euphemisms for deaths from disreputable causes such as alcoholism. The actual cause of death remains a mystery. Speculation has included delirium tremens, heart disease, epilepsy, syphilis, meningeal inflammation, cholera, and rabies. One theory dating from 1872 suggests that cooping was the cause of Poe’s death, a form of electoral fraud in which citizens were forced to vote for a particular candidate, sometimes leading to violence and even murder.

At yovisto academic video search you can watch a lecture on Edgar Allan Poe delivered by Puget Sound President Ronald Thomas, where among other things, Poe’s foundational detective story, “The Murders in the Rue Morgue” is discussed.