You are here: Home › literature › Raymond Chandler and the Invention of the Hardboiled Detective Novel 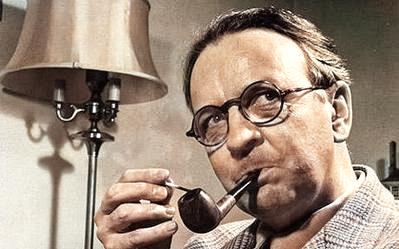 On July 23, 1888, American-British novelist and screenwriter Raymond Chandler was born. Chandler is considered one of the pioneers of American hardboiled novels. He invented the character of the melancholic and ultimately moral private detective Philip Marlowe for his crime novels. In addition to his crime novels, he wrote a series of short stories and screenplays. Along with Dashiell Hammett, he is one of the great authors of the black series in the American crime novel.

“It was about eleven o’clock in the morning, mid October, with the sun not shining and a look of hard wet rain in the clearness of the foothills. I was wearing my powder-blue suit, with dark blue shirt, tie and display handkerchief, black brogues, black wool socks with dark little clocks on them. I was neat, clean, shaved and sober, and I didn’t care who knew it. I was everything the well-dressed private detective ought to be. I was calling on four million dollars.”
— Raymond Chandler, The Big Sleep (1939), opening paragraph, chapter 1

Raymond Chandler was born in Chicago, Illinois, the son of engineer Maurice Benjamin Chandler and Florence Dart Chandler, née Thornton. Both were Quakers. His father was from Philadelphia and his mother was from Waterford in Ireland. His father left the family for another woman; his parents divorced in 1895 and Chandler moved to England with his mother. From 1900 to 1905 Chandler attended Dulwich College in southwest London, where he developed his first interest in foreign languages and classical philology. The following two years he spent in France, where he attended a business school in Paris, and in Germany with private lessons, in preparation for the entrance examination for the British Civil Service.

A Reporter and Freelance Journalist

In 1907, Chandler passed the examination as the third-best of a total of 600 candidates. He worked for half a year in the British Department of the Navy and sporadically as a substitute teacher at Dulwich College after his retirement. His encounter with Richard Barham Middleton, who was only a little older, is said to have strongly influenced him in pursuing a career as a writer. From 1908 Raymond Chandler worked as a reporter in London for the Daily Express, then as a freelance journalist for the liberal evening paper The Westminster Gazette and the weekend magazine The Academy, where he published reports, reviews, satirical sketches and essays. A total of 27 poems were published during this period in Chambers’ Journal, The Westminster Gazette, The Academy and The Spectator.

“The private detective of fiction is a fantastic creation who acts and speaks like a real man. He can be completely realistic in every sense but one, that one sense being that in life as we know it such a man would not be a private detective.”
— letter, 19 April 1951, published in Raymond Chandler Speaking (1962)

In 1912 he returned to the United States. Via St. Louis (Missouri) and Omaha (Nebraska) Chandler finally settled in California, where he found work on an apricot plantation and in a company for sporting goods. In the following year, he completed a three-year accounting course within six weeks. At the Los Angeles Creamery Dairy, he applied his newly acquired knowledge as an accountant. In 1917, Chandler joined the Canadian Gordon Highlanders as a volunteer in the Canadian army to fight with the Entente during the First World War. Chandler served in France and England (Royal Flying Corps) until 1919. In 1919 he returned to California with his mother. In 1924 he married Pearl Cecily Bowen, née Hurlburt, who was 18 years older and thus entered into her third marriage. Until 1932 he held various positions, including director of several independent oil companies.

Chandler lost the lucrative position at the oil company and consequently completely reoriented himself. So he decided to dedicate himself to writing crime stories from then on. In 1933, the first short story by Chandler (“Blackmailers Don’t Shoot“) appeared in the journal Black Mask, which had established itself as a series product for short crime stories. In the following years more stories appeared in similar magazines. Chandler learned his trade, so to speak, in order to write larger crime novels later on. Some of the short stories he published were later converted into novels.

The first novel, The Big Sleep, featuring the detective Philip Marlowe, speaking in the first person, which became the model for the film of the same name, was published in 1939 and was a great success. His second Marlowe novel, Farewell, My Lovely (1940), became the basis for three movie versions adapted by other screenwriters, including the 1944 film Murder My Sweet, which marked the screen debut of the Marlowe character, played by Dick Powell (whose depiction of Marlowe Chandler reportedly applauded).  In 1943 Chandler went to Hollywood as a screenwriter, where he first wrote the Oscar-nominated screenplay for Double Indemnity with Billy Wilder.[1] He also wrote the Oscar-nominated screenplay for the Alan Ladd/Veronica Lake classic The Blue Dahlia. Chandler collaborated on the screenplay of Alfred Hitchcock‘s Strangers on a Train (1951),[2] an ironic murder story based on Patricia Highsmith‘s novel, which he thought implausible. Chandler clashed with Hitchcock to such an extent that they stopped talking, especially after Hitchcock heard Chandler had referred to him as “that fat bastard”.

Not Satisfied with Hollywood

However, Chandler was not satisfied with his work in Hollywood. The squinting at Chandler’s success with the public seems to have narrowed him down too much, which is why there were more conflicts with directors and producers. Chandler has published a number of novels, among which “The Long Good-Bye” occupies an outstanding position. With him, Chandler seems to have reached the climax of his concept of the mystery novel: The Mystery Writers of America honored him in 1955 with the Edgar Allan Poe Award (category Best Novel) as the best novel of the year. The last two novels, “Playback” and “Poodle Springs” (unfinished), no longer reach the quality of the previous works.

“What did it matter where you lay once you were dead? In a dirty sump or in a marble tower on top of a high hill? You were dead, you were sleeping the big sleep, you were not bothered by things like that. Oil and water were the same as wind and air to you. You just slept the big sleep, not caring about the nastiness of how you died or where you fell. Me, I was part of the nastiness now.”
— Raymon Chandler, The Big Sleep (1939)

Chandler’s wife died in December 1954. Chandler threatened suicide several times in the following months. In February 1955 he tried to shoot himself in the shower, but the attempt failed. He sold his house in La Jolla and went to London. Chandler stayed for several months. He returned there several times in the following years and lived alternately in the USA and England. After his wife died, Chandler started drinking. In 1956 he was hospitalized for the first time because of his alcoholism. In the following years, he repeatedly underwent medical treatment. In 1959 Raymond Chandler fell seriously ill. He died on 26 March 1959 in La Jolla, California.

Critics and writers, including W. H. Auden, Evelyn Waugh and Ian Fleming, greatly admired Chandler’s prose. In a radio discussion with Chandler, Fleming said that Chandler offered “some of the finest dialogue written in any prose today“. The high regard in which Chandler is generally held today is in contrast to the critical sniping that stung the author during his lifetime.