You are here: Home › cinematography › The Art of Suspense – Alfred Hitchcock’s Cinema 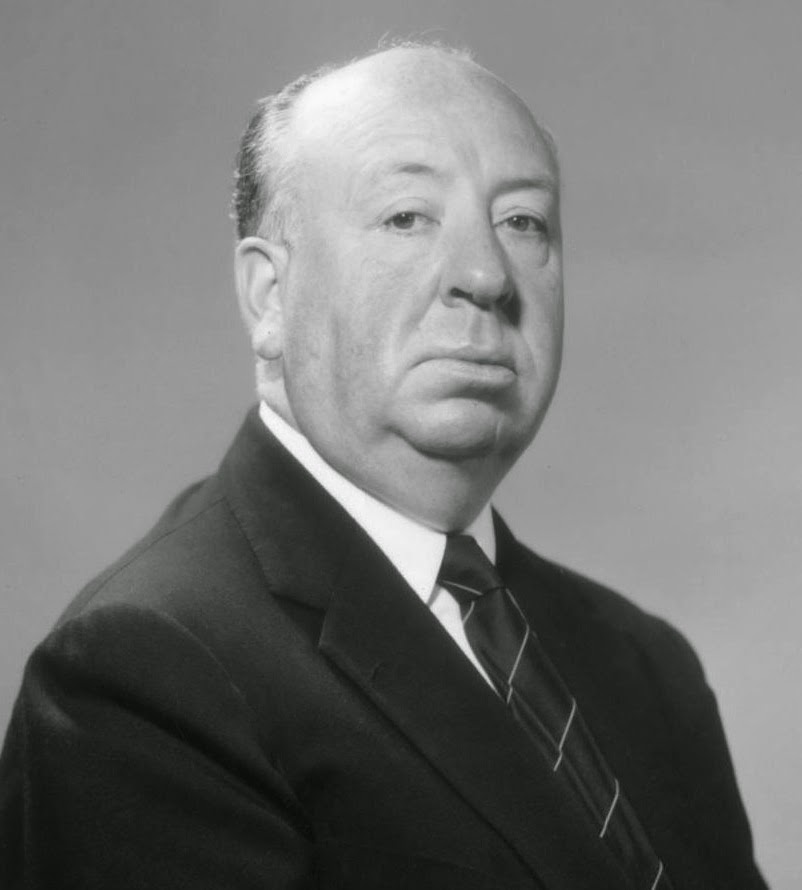 On August 13, 1899, English film director and producer Alfred Hitchcock was born. Reknowned as England’s best director, he pioneered many techniques in the suspense and psychological thriller genres. Hitchcock directed more than fifty feature films in a career spanning six decades and often is considered the most influential filmmaker of all time.

“One of television’s great contributions is that it brought murder back into the home, where it belongs.”
– Alfred Hitchcock, National Observer (15 August 1966).

Alfred Hitchcock was born in Leytonstone near London, the youngest son of the greengrocer William Hitchcock (1862-1914) and his wife Emma Jane Whelan (1863-1942). He enrolled at the London County Council School of Engineering and Navigation and became a draftsman and advertising designer with a cable company afterwards. During his time at the company, he published his first creepy short stories in the company magazine under his nickname “Hitch”. In the spring of 1920, Hitchcock heard about the founding of a studio of the American production company Paramount Famous Players-Lasky in London’s Islington district. He applied with a portfolio of illustrations and was employed as an illustrator of intertitles. In 1921 and 1922 he drew the titles for at least twelve films. At the same time he designed costumes, decorations and scenes. He also drew attention to himself by revising scripts.

In 1922, Hitchcock was given the opportunity to try his hand at directing. With the author Seymour Hicks, he completed the last scenes of Always Tell Your Wife after the original director was fired. Soon afterwards he was able to make his own film, Number 13 (in some sources Mrs. Peabody), which remained unfinished because Famous Players-Lasky had to close the studio due to financial difficulties during the shooting. The vacant site was leased to independent producers, including Michael Balcon, who finally acquired the studio in 1924. He hired Hitchcock as assistant director. By 1925, Hitchcock had made five films in which he assisted the director Graham Cutts and gained more and more artistic influence in response to Cutts’ growing discontent.

Hitchcock came to Potsdam, Germany around 1924 to co-author the film The Blackguard and it is assumed that he was highly influenced by the works of Fritz Lang and F. W. Murnau.[4,5] The first films, Hitchcock directed were financially unsuccessful until in 1926, when he produced his first thriller, The Lodger. The suspense film was about the hunt for a serial killer in London similar to Jack the Ripper and was an instant success [1,2].

About two years after releasing The Lodger, Hitchcock began working on another film that was later considered a milestone in filmmaking. The film is based on the play Blackmail by Charles Bennett and is about a woman from London who is blackmailed after killing a man that tries to rape her. After starting production as a silent film, British International Pictures decided to convert Blackmail into a sound film during filming. In it, Hitchcock began his long tradition of using famous landmarks for suspense sequences. Further films of the period include a musical film revue Elstree Calling and The Man Who Knew Too Much, which was released in 1934. One year later, The 39 Steps was produced and it was considered the fourth best British film of the 20th century, which also made Hitchcock incredibly popular in the United States. In the New York Times, a feature writer stated: “Three unique and valuable institutions the British have that we in America have not. Magna Carta, the Tower Bridge and Alfred Hitchcock, the greatest director of screen melodramas in the world“[1,3].

The director and producer moved to Hollywood and in the early 1940s, the film Rebecca, which won the Academy Award for Best Picture. In his early years in Hollywood, Hitchcock produced Shadow of a Doubt and it is assumed that it was his personal favorite of all his films. In the film, the young Charlotte Newton suspects her uncle Charlie Oakley of being a serial murderer and it was filmed in Northern California in 1942. A few years later, Hitchcock founded an independent production company through which he made his first film in color, Rope. However, after his 1949 production of Under Capricorn, he returned to black-and-white films for several years. In 1955, Hitchcock became a U.S. citizen and five years later, he produced his presumably best known film, Psycho. The film became popular for the famous shower scene, which features 77 different camera angles, and for the early death of the heroine. The film broke box-office records around the globe and was probably one of the most profitable black-and-white sound film ever made [3].

For me, I definitely like his movies starring Cary Grant, one of my most favourite actors. In To Catch a Thief,  Grant plays retired thief John Robie, who becomes the prime suspect for a spate of robberies in the Riviera. However, my favourite Hitchcock movie is North by Northwest. In North by Northwest, in which Cary Grant portrays Roger Thornhill, a Madison Avenue advertising executive who is mistaken for a government secret agent. He is hotly pursued across the United States by enemy agents, including (it appears) Eve Kendall, played by Eva Marie Saint. Thornhill at first believes Kendall is helping him, then that she is an enemy agent; he eventually learns that she is working undercover for the CIA. North by Northwest, one of the very first action films, is one of the most popular movies of Alfred Hitchcock. The elegant lightness of the story influenced many subsequent adventure and agent films, which can be seen in the James Bond films of the following years, among others. For Hitchcock himself, it remained the last predominantly cheerful film for a long time.

The subsequent project with Audrey Hepburn in the leading role was stopped by Hitchcock when Hepburn cancelled due to a planned rape scene. With his deliberately low-cost production Psycho (1960), Hitchcock’s probably best known film followed. The “shower scene”, shot in a week’s shooting, is now one of his most analysed film scenes. The death of a main character after only one third of the film was also unusual. Contemporary critics were unexpectedly harsh, but the audience made Psycho Hitchcock’s greatest commercial success. After two planned projects failed – among other things because Walt Disney [6] refused the psycho director permission to film in Disneyland – Hitchcock did not tackle his next film until mid-1961: The Birds (1963), another horror film, which had a style-forming effect not least due to its dramaturgy and the trick technique used – such as the Sodium Vapor Process. The German composer Oskar Sala used electronically generated sounds instead of film music.

After The Birds, there’s a rupture in Hitchcock’s work. The following three films of the 1960s remained artistically and commercially behind the previous successes. Conflicts with his leading actress Tippi Hedren shaped the shooting so much that he seemed to deliberately sabotage the success of his next film Marnie (1964). The psychogram of a disturbed, traumatized woman makes use of psychological explanatory models that seem outdated and undifferentiated, and contains an untypical number of technical errors for Hitchcock. This first artistic and commercial failure in around fifteen years was a turning point in Hitchcock’s career in several respects.

The master of suspense directed more than 50 feature films during his long career. Today, his work is admired worldwide, and he’s considered one of our finest directors. Although many of his landmark films remain copyrighted, some of his important works, particularly his early ones, have slipped into the public domain. Hitchcock appears briefly in most of his own films. For example, he is seen struggling to get a double bass onto a train (Strangers on a Train), walking dogs out of a pet shop (The Birds), fixing a neighbour’s clock (Rear Window), as a shadow (Family Plot), sitting at a table in a photograph (Dial M for Murder), and missing a bus (North by Northwest).

Alfred Hitchcock died of kidney failure in his home in Los Angeles on the morning of April 29, 1980.