You are here: Home › space › Pioneer 5 and the Interplanetary Magnetic Fields 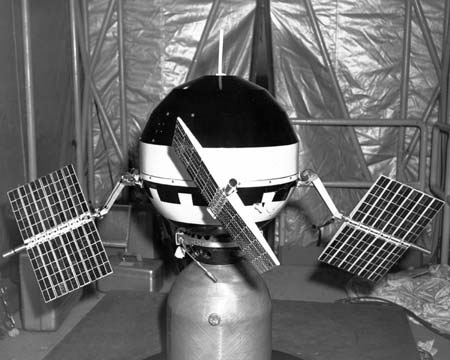 On March 11, 1960, NASA space probe Pioneer 5 was launched from Cape Canaveral. Pioneer 5 as part of the NASA Pioneer program was used to investigate interplanetary space between the orbits of Earth and Venus. As this, it was in one of the first in-depth attempts to study the solar system. Among other accomplishments, the probe confirmed the existence of interplanetary magnetic fields.

Pioneer 5 was part of the NASA pioneer program. The earliest missions of the pioneer program back in 1958 were attempts to achieve Earth‘s escape velocity, simply to show it was feasible and study the Moon. This included the first launch by NASA which was formed from the old NACA. These missions were carried out by the US Air Force and Army. Pioneer 1 became the first spacecraft launched by NASA, the newly formed space agency of the United States, in October 1958 with the goal to reach the Moon. Unfortunately, the Moon was no reached as planned due to a programming error in the upper stage. Pioneer 2, also aimed for the Moon, did not reach its goal since the third stage of the launch vehicle failed to ignite, making it impossible for Pioneer 2 to achieve orbital velocity. Pioneer 3, launched in December 1958, had the mission to pass close to the Moon and then go into solar orbit, but again it missed Moon due to launcher failure. However, Pioneer 4 then was a success. After a successful launch Pioneer 4 in March 1959 achieved its primary objective, i.e. an Earth-Moon trajectory and passed within 60,000 km of the Moon‘s surface returning radiation data.

Beginning with Pioneer 5, the program shifted focus to interplanetary space – and immediately became more successful.[3] Pioneer 5 was launched on March 11, 1960 from Cape Canaveral Air Force Station Launch Complex 17A at 13:00:00 UTC with an on-orbit dry mass of 43 kg. It is a 0.66 m diameter sphere with 1.4 m span across its four solar panels. It was equipped with a triple coincidence omnidirectional proportional counter telescope to detect solar particles and observe terrestrial trapped radiation. In addition, a rotating search coil magnetometer to measure the magnetic field in the distant field of the Earth, near the geomagnetic boundary, and in interplanetary space, and an ionization chamber with a Geiger-Müller tube to measure cosmic radiation.[4] Furthermore, the probe included a micrometeorite momentum spectrometer used to measure the amount of meteoritic dust particles and the momentum of these particles. 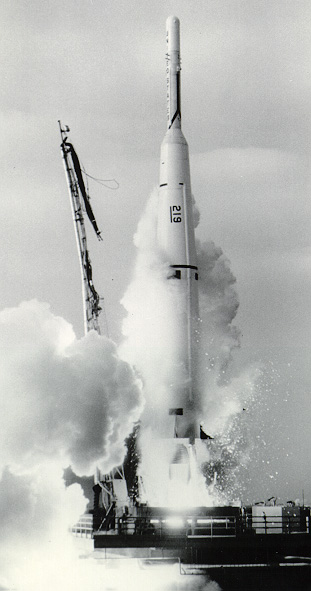 The spacecraft had originally been intended for a Venus flyby, but the mission was switched to a solar flyby.[1] The spacecraft returned data collected by the magnetometer on the magnetic field and also measured solar flare particles, and cosmic radiation in the interplanetary region. The micrometeorite counter failed to operate as the data system saturated and failed to operate properly. Pioneer 5 carried Telebit, the first digital telemetry system operationally used on a U.S. spacecraft; it was first tested on Explorer 6. The system used a 5-watt or a 150-watt transmitter, with a 5-watt transmitter acting as driver. [1] The recorded digital data were transmitted at 1, 8, and 64 bit/s, depending on the distance of the spacecraft from Earth and the size of the receiving antenna. Weight limitations on the solar cells prevented continuous operation of the telemetry transmitters. About four operations of 25 min duration were scheduled per day with occasional increases during times of special interest. A total of 138.9 h of operation was completed, and over 3 megabits of data were received. Data was received until April 30, 1960, after which telemetry noise and weak signal strength made data reception impossible. 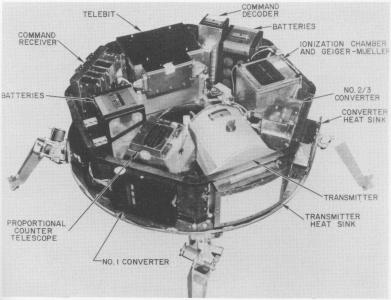 The Goal of Pioneer 5’s mission was to demonstrate deep space technologies and to provide the first map of the interplanetary magnetic field, which have been successfully achieved.[1] Moreover, the probe confirmed the existence of previously conjectured interplanetary magnetic fields. The spacecraft established a communications link with the earth from a record distance of 22.5 million miles on June 26, 1960, which was the last day of transmission.[2] Thus, Pioneer 5 provided the first experience of communicating with a spacecraft at distances of tens of millions of km.[3] Pioneer 5 was followed by a series of identical, spin-stabilized probes equipped with sensors to monitor the solar wind, magnetic fields, and cosmic rays. All vastly exceeded their design lifetimes of six months. Pioneer 9 finally failed in 1983 after 15 years service, contact with Pioneer 6 was reestablished on Dec. 8, 2000 – 35 years after launch, and data from one science instrument on each of Pioneer 7 and 8 are still being received.[3]