You are here: Home › aviation › Walter Schirra – the only Man to fly Mercury, Gemini and Apollo 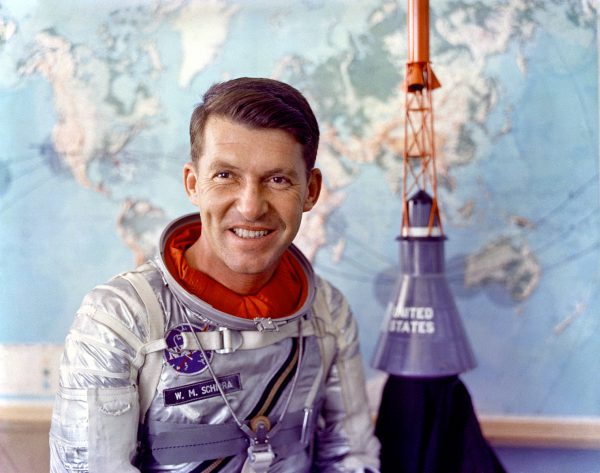 Walter M. Schirra Jr. in Mercury pressure suit with model of Mercury capsule behind him

On March 12, 1923, American naval officer and aviator, aeronautical engineer, test pilot, and astronaut Walter Marty “Wally” Schirra was born. Schirra was one of the original seven astronauts chosen for Project Mercury, United States first effort to put humans in space. He flew the six-orbit, nine-hour Mercury-Atlas 8 mission on October 3, 1962, becoming the fifth American, and the ninth human, to ride a rocket into space. He was the only astronaut to fly Mercury, Gemini and Apollo missions.

Walter Schirra a was a descendant of immigrants from Loco Ti in the Swiss canton of Ticino (Onsernone valley), was the son of Royal Canadian Air Force pilot Walter M. Schirra who already flew bombing and reconnaissance missions over Germany during the First World War. Schirra’s mother Florence Schirra back then performed wing walking stunts. Schirra grew up in Oradell, New Jersey, where he attended school.  He graduated from Dwight Morrow High School in 1940 and joined the Newark College of Engineering,(now New Jersey Institute of Technology, NJIT), where he was involved in the Reserve Officer Training Corps. Following the attack on Pearl Harbor in December 1941, Schirra decided to apply to a service academy. His father encouraged him to apply to West Point, but he decided to enroll in the United States Naval Academy instead. Schirra graduated with a bachelor degree in 1945 after only three years instead of four, as the Naval Academy had a wartime accelerated curriculum.

In the last weeks of the Second World War he served on board the USS Alaska, but the war was over before the ship reached the battle zones. He continued the service and trained as a Naval Aviator at Naval Air Station Pensacola, Florida after World War II had ended. In 1948 he joined the Fighter Squadron 71. Schirra was stationed in South Korea upon the outbreak of the Korean war. He flew 90 combat missions between 1951 and 1952, mostly in F-84 Thunderjet. He received the Distinguished Flying Cross and the Air Medal with an oak leaf cluster for his service in Korea. Schirra then worked as a test pilot, where he was also involved in the development of air-to-air missiles, and later also became a flight instructor and carrier based aviator on board the USS Lexington.

Walter Schirra was chosen among the 100 test pilots who aimed for the first U.S. manned space flight program ‘Project Mercury‘. On April 9, 1959, NASA presented him to the public as one of the first seven American astronauts. His duty was the development of environmental controls or life-support systems that would ensure the safety and comfort of the astronaut within the spacecraft during the mission. His tasks also included the testing and improvement of the pressurized suit worn by the astronauts. For the second flight of a Mercury spacecraft in Earth orbit, Mercury Atlas 7, Schirra was assigned as a replacement pilot. When the originally nominated pilot Deke Slayton was denied the ability to fly, it was not Schirra but Scott Carpenter who came into play. Schirra became the fifth American in Space when he piloted the Mercury-Atlas 8 on a orbit mission that lasted 9 hours. This flight went down in the history of NASA as a “space flight from the textbook”.

From January 1963 Schirra took over new tasks at NASA in the coordination of Gemini and Apollo activities. From April 1964 he prepared himself for the first American two-man flight Gemini 3, for which he was assigned as replacement commander. After this flight was successfully performed by Virgil Grissom and John Young on March 23, 1965, he received command of the next available flight: Gemini 6 with Pilot Tom Stafford. Walter Schirra proved his nerves of steel when, during a failed launch attempt by Gemini 6, he failed to trigger the ejection seats, even though the displays signalled that the rocket had already lifted off and thus threatened to fall back onto the launch pad – with devastating consequences. However, Schirra did not rely on the instruments, but on the fact that he had not felt any signs of acceleration. This assessment proved to be correct: in fact, the rocket had not yet lifted off. Schirra managed to successfully perform the first rendezvous with Gemini 7 containing astronauts Frank Borman and James Lovell, station-keeping his craft to distances as close as 30 cm.

Schirra was declared to command a three-man Apollo crew with Donn F. Eisele and R. Walter Cunningham in 1966. The goal was to perform the  second manned flight test of the Apollo Command/Service Module, however, the mission was soon considered unnecessary. Schirra’s crew was then announced Grissom’s backup. In 1967, Grissom and his crew were killed in a cabin fire during a ground test of Apollo 1 and Schirra’s crew was promoted to prime crew of the first manned flight onboard Apollo 7. The mission was launched in 1968 and Walter Schirra became the first person to fly in space three times.  From a technical point of view, this flight was excellent, a rendezvous with the upper stage of the Saturn 1B rocket was carried out and the first television pictures from an American spaceship were sent to Earth. However, the astronauts suffered from a cold, and there was a rather irritable atmosphere between the flight control centre and the spacecraft. The situation escalated when the crew refused to wear the helmets for re-entry into the Earth’s atmosphere, which the flight control center strictly refused for safety reasons. Wearing the helmet during re-entry would have prevented the crew from manually equalizing the pressure in the auditory canals by holding their nose shut while exhaling at the same time. The astronauts feared, however, that as a result they would have suffered great pain until the eardrum ruptured, so that Schirra, as commander of the flight, ignored the instructions of the flight control centre and the crew re-entered the Earth’s atmosphere without helmets. These tensions led to the fact that Schirra and his crew colleagues were no longer used for any further space flights. However, after the flight, Walter Schirra retired, leaving the NASA Astronaut Corps on July 1, 1969.

He worked as a board member and managing director in several companies until he founded his own company Schirra Enterprises in 1979. He also served on the supervisory boards of several companies and made television commercials for Actifed, the drug he took during the Apollo 7 flight. Schirra died on May 3, 2007, at the age of 84 as a result of cancer.