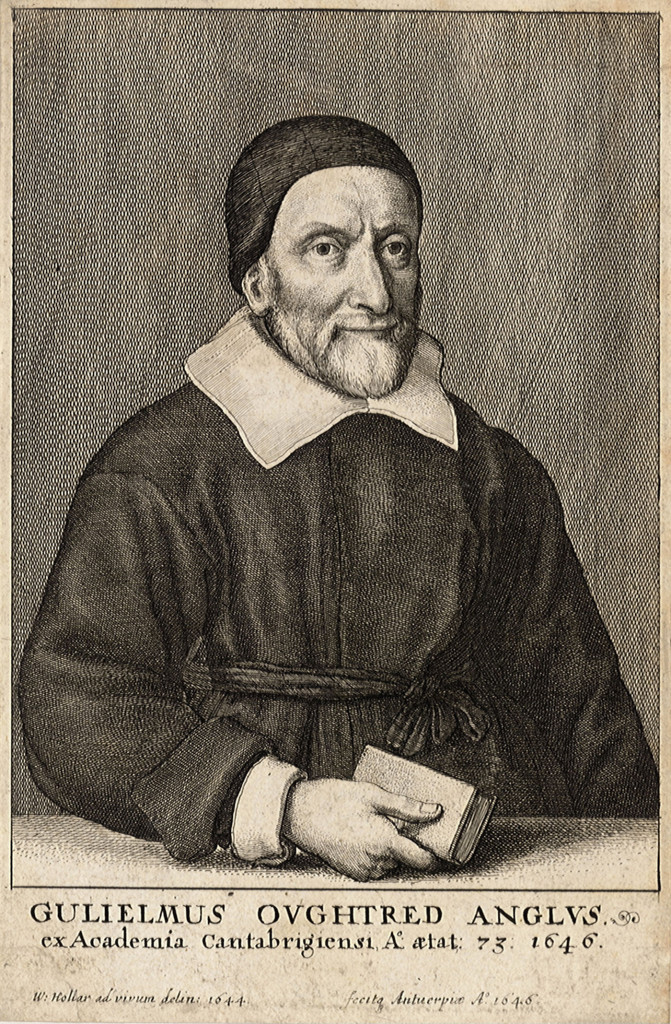 On March 5, 1574, English mathematician and Anglican minister William Oughtred was born. After John Napier [3] invented logarithms, and Edmund Gunter [6] created the logarithmic scales (lines, or rules) upon which slide rules are based, it was Oughtred who first used two such scales sliding by one another to perform direct multiplication and division; and he is credited as the inventor of the slide rule in 1622.

William Oughtred born at Eton, Buckinghamshire to the Rev Benjamin Oughtred, a writing-master and ‘registrar’ at Eton College. Naturally, Oughtred also attended the presticious school before he enrolled at King’s College Cambridge in 1592. Oughtred was especially interested in mathematics, even though the field has not been taught extensively at Cambridge back then. Three years later he became a Fellow of King’s College, received his B.A. in 1596 and his M.A. in the year 1600. Outhred became Episcopal minister in 1603 and became vicar of Shalford one year later. Oughtred was announced rector of Albury in 1610 and took mainly private pupils who received a mathematical education. He had many pupils but the most famous were John Wallis, John Pell,[4] Seth Ward, Christopher Wren [5] and Richard Delamain. He would continue to keep this position for the rest of his life, but he made contacts with fellow mathematicians at Gresham College in London.

In 1631, Oughtred published his most important work, ‘Clavis Mathematicae‘ to support him in his teaching of mathematics. In it, he described Hindu-Arabic notations and decimal fractions as well as algebra. But one of the real strengths of the work is the way that fractions, irrationals, decimal expansions, and logarithms are all treated as “numbers.” This was in contrast with other mathematicians at this time who treated these as distinct concepts. He even treats negative numbers as “numbers,” although he does not allow these to be the solutions of equations.[1] The Latin editions of the Clavis were read throughout Europe and Oughtred enjoyed a very widespread and very high reputation as a mathematician.[8] Oughtred began to experiment with new mathematical symbols like x for multiplication and :: for proportions. He used π for the circumference and introduced ‘greater than and less than’ symbols, which were not accepted by the community due to being too hard to remember. The now very familiar < and > were introduced by Harriot. [1] 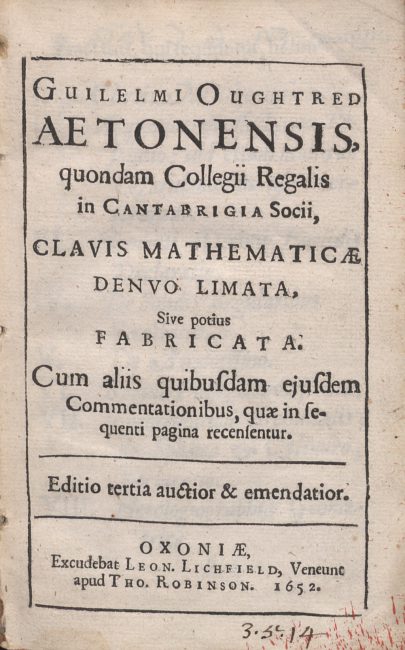 William Oughtred became especially famous for an early version of the slide rule. Already in 1620, the English clergyman, mathematician, geometer and astronomer Edmund Gunter [6] managed to plot a logarithmic scale along a single straight two foot long ruler. He began to add and substract lengths by using a pair of dividers. The operations used were equivalent to multiplying and dividing. William Oughtred invented a circular slide rule about one decade later. In 1632, Oughtred published Circles of Proportion and the Horizontal Instrument describing slide rules and sundials. [2]

It is believed that William Oughtred and Richard Delamain invented the circular slide rule independently from each other. Delamain published his Grammelogia, or the Mathematical ring already in 1630. Big discussions arose over the topic and throughout Oughtred’s later life. [1] The English Civil War (1642-1646) was a difficult time for Oughtred who was a staunch royalist supporter. In 1646 he was summoned before Oliver Cromwell‘s sequestration committee because of his royalist support. Oughtred was shocked at execution of King Charles I in January of 1649 but it is said that he rejoiced on his deathbed at the news that Charles II, who reached London on 20 May 1660, had been restored to the English throne.[1]

Claire Ridgeway, A mathematician, Call Me Risley, and a scapegoat, [9]