You are here: Home › philosophy › Thomas Aquinas and the Tradition of Scholasticism 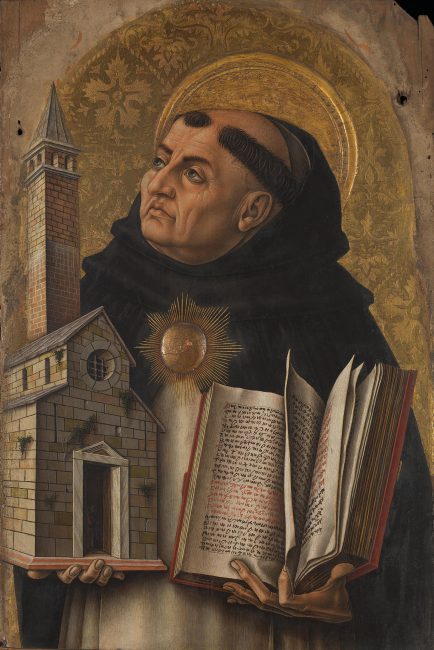 On March 7, 1271, Thomas Aquinas, Italian Dominican friar and priest and an immensely influential philosopher and theologian in the tradition of scholasticism, passed away. His influence on Western thought is considerable, and much of modern philosophy was conceived in development or refutation of his ideas, particularly in the areas of ethics, natural law, metaphysics, and political theory.

“All that I have written seems like straw compared to what has now been revealed to me.”
– Thomas Aquinas, as quoted in [15]

Thomas Aquinas was born shortly before or shortly after New Year’s Day 1225 in Roccasecca Castle, 9 km from Aquino, an Italian city with Episcopal see in the province of Frosinone in the region of Lazio. He was the seventh child of Count Landulf of Aquino (b. 1185), Lord of Loreto and Belcastro, and Donna Theodora, Countess of Teate of the Neapolitan noble family of Caraccioli (1183-1255). At the age of five, he was sent as an oblate to the Benedictine monastery of Montecassino, where Sinibald, his father’s brother, served as abbot. Thomas’ family thus followed the tradition of giving the youngest son of the family to a clerical office. It was in the family’s interest that Thomas succeed his uncle.

In 1239, he enrolled at the university that was recently established by Frederick II [4] in Naples for the studium generale, where he was presumably introduced to Aristotle, Averroes and Maimonides, which influenced him significantly. Another important influence was a Dominican preacher in Naples, John of St. Julian. At the age of nineteen, Thomas resolved to join the recently founded Dominican Order, which had been founded in 1215 as a mendicant order and certainly did not please his family. To remove Thomas from the influence of his parents, the Order sent him first to Rome and then to Bologna. On the way there, however, he was attacked by his brothers, acting on behalf of his mother, and taken for a short time to the castle of Monte San Giovanni Campano and then to Roccasecca. From May 1244 to autumn 1245 his family held him. However, Thomas used his time to contact members of the Dominican Order and teach his younger siblings. In 1244, Thomas managed to flee and met Johannes von Wildeshausen, the Master General of the Dominican Order in Rome. Since Thomas remained firm in his resolve to remain a Dominican, the family relented and allowed him to return to the Dominican Convent of Naples.

Thomas enrolled at the University of Paris one year later and it is assumed that he met the scholar Albertus Magnus there.[5] Thomas followed Albertus to Cologne in 1248 where started teaching as an apprentice professor. From 1248 to 1252 he worked as an assistant to Albertus. Back in Paris, he continued his studies and soon worked on his first of four theological syntheses. His reputation grew and he was appointed regent master on theology at Paris and wrote numerous works including ‘Questiones disputatae de veritate‘ (Disputed Questions on Truth), a collection of twenty-nine disputed questions on aspects of faith and the human condition. By the end of his regency, Thomas was working on one of his most famous works, ‘Summa contra Gentiles‘.

“When what is ordered by an authority is opposed to the object for which that authority was constituted, … not only is there no obligation to obey the authority, but one is obliged to disobey it, as did the holy martyrs who suffered death rather than obey the impious commands of tyrants.”
– Thomas Aquinas, Commentary on the Sentences of Peter Lombard

The following years, Thomas traveled around Paris, Naples and Orvieto, where he completed his ‘Summa contra Gentiles‘, wrote the ‘Catena aurea‘, (The Golden Chain), and produced works for Pope Urban IV such as the liturgy for the newly created feast of Corpus Christi and the ‘Contra errores graecorum‘ (Against the Errors of the Greeks). Thomas became the papal theologian under Pope Clement IV and continued teacher philosophical subjects. While occupied at Santa Sabina, Thomas started his most famous work, ‘Summa Theologica‘, which however, stayed unfinished. Still, it is referred to as “one of the classics of the history of philosophy and one of the most influential works of Western literature”. It was intended as an instructional guide for moderate theologians and a compendium of all of the main theological teachings of the Catholic Church. It presents the reasoning for almost all points of Christian theology in the West. The Summa’s topics follow a cycle: the existence of God, Creation, Man, Man’s purpose, Christ, the Sacraments, and back to God.

Thomas was assigned back to Paris for another regency which is presumably due to the rise of Averroism and “radical Aristotelianism” in the universities. Thomas wrote works in respond to the new movements, but was accused of encouraging Averroists, even though he was deeply disturbed by them. It was feared that the introduction of Aristotelianism and the more extreme Averroism might somehow contaminate the purity of the Christian faith. In the 1270s, Thomas decided to establish a studium generale in Naples where he taught religious topics. 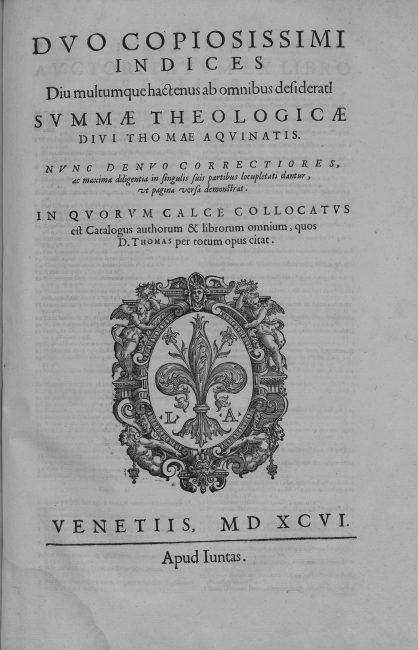 Thomas died at the monastery of Fossanova on March 7, 1274, while traveling to the Second Council of Lyon. Dante [7] suggests in a passage in the Purgatory (XX, 69) of his Commedia that Charles I of Anjou was responsible for Thomas’ death. He follows a rumor – in the meantime refuted – according to which Thomas was poisoned by Charles I or at his behest. The rumor of the poison murder was also circulated in early Latin and vernacular commentaries on Dante, written in the period after Dante’s death. Tolomeo da Lucca, a former student and confessor of Thomas, in his Historia ecclesiastica speaks only of a serious illness on the journey upon arrival in Campania, but offers no hint of an unnatural cause of death. Pope John XXII canonized Thomas in 1323. In 1567 he was elevated to the rank of Doctor of the Church. 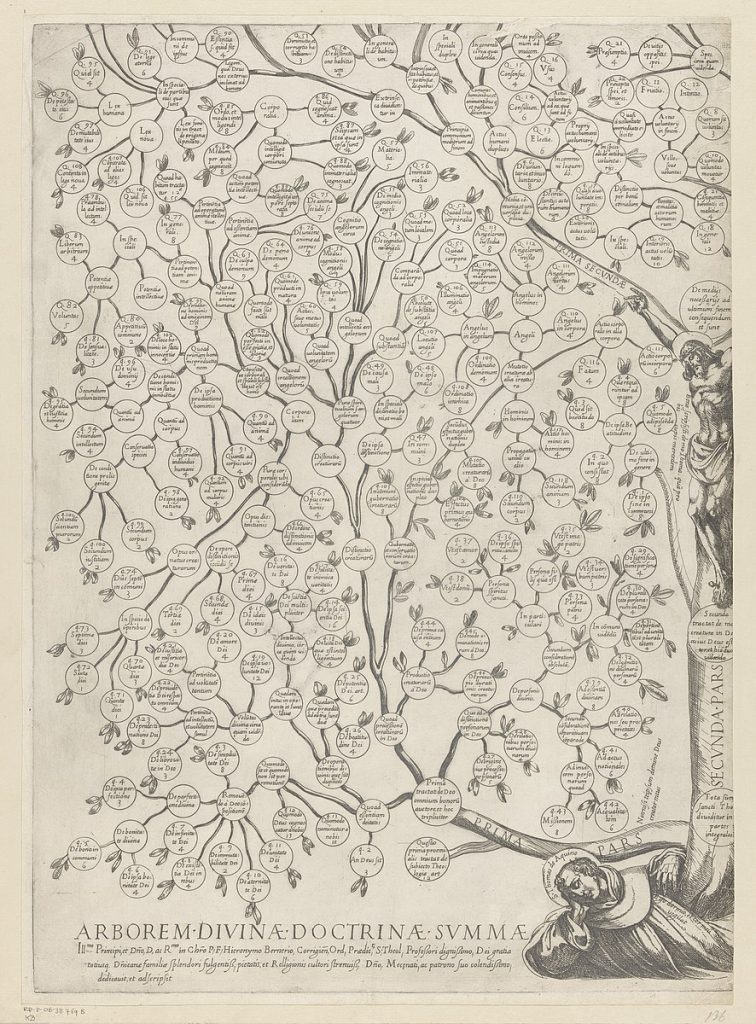 The philosopher and theologian Thomas Aquinas lies at the base of a tree. On the trunk of the tree the crucified Christ. The branches of the tree represent the three parts of Aquinas’ ‘Summa Theologiae‘. Above in the center God the Father and the Holy Spirit as a dove. Top left and top right a coat of arms.

The argumentations of Thomas are based to a large extent on the thoughts of Aristotle, which spread again in the High Middle Ages, and which he – himself a student of the founder of medieval Aristotelianism, Albertus Magnus – passes on in his university work and combines with theology in his works. Thus he identifies the Unmoved Mover from Aristotle’s physics with God. Nevertheless, in his doctrine of God he elaborates the importance of revelation, which remains unattainable for philosophical considerations alone.

A core element of Thomistic ontology is the doctrine of analogia entis. It states that the concept of being is not univocal but analogous, that is, the word “being” has a different sense depending on the objects to which it is referred. According to it, everything that is has being and is through being, but it has being in different ways. In the highest and actual way it comes only to God: Only he is being. All other being has only part of being and that according to its being. In all created things, therefore, essence (essentia) and existence (esse) must be distinguished; only in God do they coincide. The distinction between substance and accidence is also significant for Thomas’ system. He follows the Aristotelian teaching, according to which the accidens has no being of its own, but only a being in the substance. Another important distinction is that of matter and form. Single things come into being by the fact that matter is determined by form. The basic forms space and time adhere inseparably to matter. The highest form is God as causer (causa efficiens) and as final purpose (causa finalis) of the world. The unformed original matter, i.e. the first substance, is the materia prima.

Among the particularly significant statements of Thomistic epistemology is its definition of the truth of adaequatio rei et intellectus, i.e., the correspondence of object and understanding. Thomas distinguishes between the “active mind” (intellectus agens) and the “receptive or possible mind” (intellectus possibilis). The active mind is characterized above all by the ability to abstract universal ideas or universally valid (essential) knowledge from sense experiences (as well as from what has already been mentally recognized). In contrast, it is the receptive mind that absorbs and stores these insights. The background is the doctrine of ideas going back to Plato, according to which the sensually perceptible individual things owe their existence and their essence to the ideas (ideae) by which they are determined.

Aquinas and Happiness: A Lecture by Dr. Jennifer Frey, [14]