You are here: Home › chemistry › Paul-Émile Lecoq de Boisbaudran and the Improvement of Spectroscopy 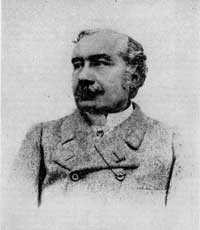 On April 18, 1838, French chemist Paul-Émile Lecoq de Boisbaudran was born. Lecoq de Boisbaudran improved spectroscopic methods which had recently been developed by Paul Kirchhoff. Furthermore he is known for his discoveries of the chemical elements gallium, samarium and dysprosium.

Paul-Émile Lecoq de Boisbaudran belonged to the ancient Protestant nobility of Poitou and Angoumois, whose considerable fortune, however, disappeared after the revocation of the Edict of Nantes. Since the property of de Boisbaudran was sold, his father Paul started a wine business at Cognac. The venture required the energy of the entire family, including young Lecoq, who in 1858 began working in the family wine business, though he pursued scientific studies in his spare time.

His mother, daughter of an army officer, was a learned woman who taught her son classics, history, and foreign languages. As business prospered, he was allowed to spend more time on scientific work.[2] He also studied some courses of the École Polytechnique by reading the syllabus and fitted up a modest laboratory, where he began to repeat the experiments which he had read in books. There, he took up the study of spectroscopic analysis and began a search for new elements in 1859, which lead to his early discoveries, including the isolation of gallium.[1]

The Discovery of New Elements

De Boisbaudran’s early work focused on supersaturation of solutions. From 1866 to 1869 he showed that supersaturation is destroyed by contact with crystals of an isomorphous salt, and that it is possible to prepare solutions of anhydrous salts in a supersaturated condition. In 1874 he found that octahedral faces are less readily soluble than cubic faces for ammonium alum crystals. His chief work, however, was in spectroscopy and its application to rare earth elements. For his volume entitled Spectres lumineux (1874) he analysed spectra of 35 elements, using the Bunsen burner,[5] electric spark or both to induce luminescence and in this way subsequently discovered the lanthanides samarium (1880), dysprosium (1886) and europium (1890). He also isolated gadolinium in 1885, the element which was previously discovered in 1880 by J.C. Galissard de Marignac.

The Discovery of Gallium

The most notable work of de Boisbaudran was, however, discovery of gallium. In 1875 he had obtained several milligrams of gallium chloride, extracted from a sample of 52 kg of mineral ore, and found new spectroscopic lines in it. He continued the experiments using several hundred kilograms of zinc ore from the Pyrenees and in the same year isolated more than one gram of the pure metal by electrolysing a solution of its hydroxide in potassium hydroxide. Later he prepared 75 grams of gallium using more than 4 tonnes of the ore. 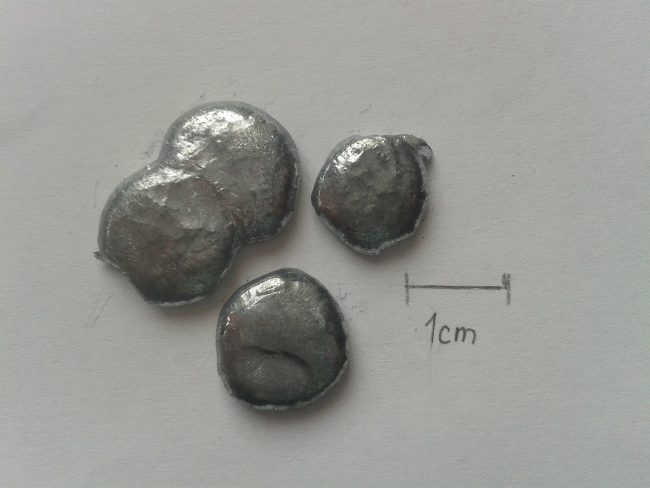 De Boisbaudran calculated the atomic weight of gallium as 69.86, close to the currently accepted value of 69.723. For this work, he received the cross of the Cross of the Legion of Honour, the Davy Medal (1879) and the Prix Lacaze of 10,000 francs. He was elected a foreign member of the Royal Society in 1888. It was later claimed that Lecoq had named the element after himself, since gallus is the Latin translation of the French le coq, but Lecoq denied this in an article of 1877 and asserted that the name originates from Latin for Gaul, Gallia.

Gallium is a moderately abundant element in the Earth’s crust. Its abundance has been estimated to be about 5 parts per million. It is found primarily in combination with zinc and aluminum ores. Gallium is a soft, silvery metal with a shiny surface. In some ways, however, it is very un-metal-like. It is so soft that it can be cut with a knife. It has a very low melting point of only 29.7°C. Therefore, a sample of gallium will melt if held in the human hand.[3] The existence of gallium had been predicted during 1871 by Dmitri Mendeleev as the element between aluminum and indium, which was missing so far.[4] Mendeleev called it eka-aluminium, and its discovery was a boost for Mendeleev’s theory of the periodic table. In 1879 Boisbaudran began spectroscopic experimentation with the rare earth elements, research that he pursued for several decades. Collaborating with John Lawrence Smith, he showed that didymium from cerite differed from that coming from samarskite. This discrepancy led to the discovery of samarium.[2]

Lecoq contributed more to the development of the periodic classification of elements by proposing, soon after its discovery, that argon was a member of a new, previously unsuspected, chemical series of elements, later to become known as the noble gases. For his accomplishments, Lecoq de Boisbaudran was awarded the Cross of the Legion of Honour (1876), the Bordin Prize from the French Academy of Sciencies (1872), the Davy Medal (1879) and the Prix Lacaze of 10,000 francs (1879). In 1888 he was elected a foreign member of the British Royal Society. After 1895, family duties and failing health hindered his work. He suffered from ankylosis of the joints and died in 1912, at the age of 74