You are here: Home › art › Paolo Veronese and the Venetian painting of the Late Renaissance 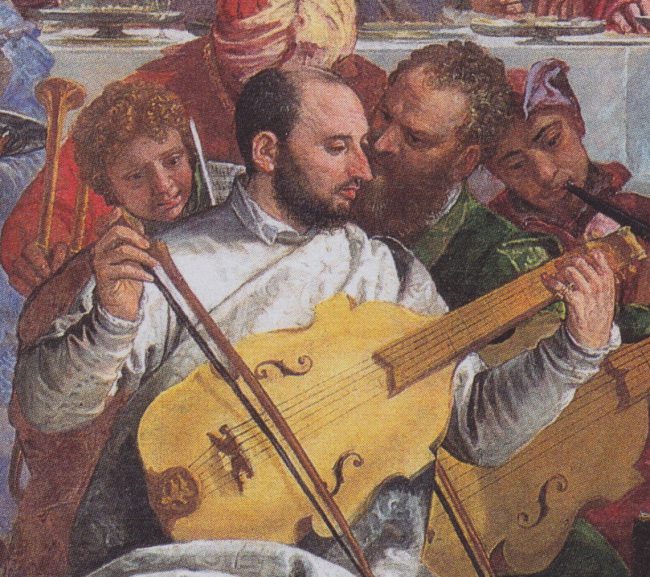 Self-portrait of Paolo Veronese as musician with viola da gamba, directly behind right portrait of Tintoretto. Detail from The Wedding at Cana, Louvre, Paris, 1562-63

On April 19, 1588, Italian Renaissance painter Paolo Veronese passed away. The Venetian painter is best known for extremely large history paintings of religion and mythology. Together with Titian and Tintoretto, Veronese is one of the “great trio that dominated Venetian painting of the cinquecento” and the Late Renaissance in the 16th century.

“We painters use the same license as poets and madmen.”
– Paolo Veronese, Testimony to the Inquisition in Venice (18 July 1573) as translated by Charles Yriarte

Paolo Veronese was born in Verona in 1528, the fifth child of Gabriele Caliari from Bissone and his wife Caterina. His father was a stonemason. It was in Verona that he received his first artistic training and became a pupil of his uncle Antonio Badile, whose daughter Elena he married on April 29, 1566. Paolo Veronese had been creating altarpieces and frescoes in the style of the Veronese school for some time in Verona when he painted his first work for Venice in 1551: the altarpiece Holy Family with St. John the Baptist, St. Catherine, and St. Anthony for the Giustiniani Chapel in San Francesco della Vigna.

After working at Castelfranco Veneto on frescoes in the Villa Soranzo, demolished in 1819, and painting a Temptation of St. Anthony for the cathedral in Mantua, he was summoned to Venice in 1553 to join other artists in decorating the three halls of the Dieci in the Doge’s Palace. His resulting paintings of great luminosity – including the allegory Juno showering Venezia with gifts – immediately brought him the highest recognition.

During the 1556-57 decoration of the ceiling in the Biblioteca Marciana, which he undertook together with Salviati, Andrea Schiavone, and four other artists, he created three ceiling paintings, for which, according to Vasari,[1] he received the offered prize in the form of a golden chain from Titian‘s hands;[2] the latter also showed his appreciation by embracing him in public. Veronese’s work was also the first of his paintings in the Biblioteca Marciana. 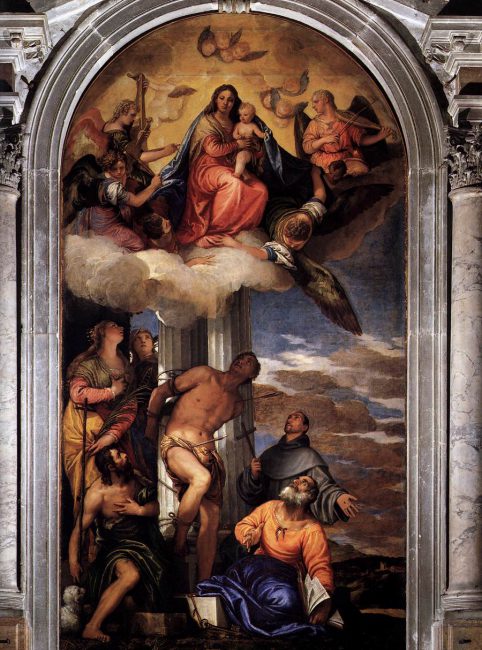 The church of San Sebastiano

“I paint my pictures with all the considerations which are natural to my intelligence, and according as my intelligence understands them.”
– Paolo Veronese, Testimony to the Inquisition in Venice (18 July 1573) as translated by Charles Yriarte

In 1555 Veronese had begun the painting of the church of San Sebastiano, which was to last for fifteen years and is one of his major works. The first thing he painted on the ceiling of the sacristy was the Coronation of Mary and the Four Evangelists. He had received the commission from his compatriot Bernardo Torlioni, who was a monk in this monastery. In 1556 followed the ceiling frescoes of the nave with three representations from the story of Esther and in 1558, among others, two pictures from the life of St. Sebastian. Sebastian and further paintings for the organ wings. In 1565 he completed the masterful main altarpiece Our Lady in Glory with St. Sebastian and other saints, and by 1570 two frescoes for the chancel, including the Martyrdom of St. Sebastian.

Veronese kept his residence in Venice, but was active in the surrounding area on several occasions: Near Vicenza, together with Giambattista Zelotti, he executed allegorical representations and those from ancient history in the Villa Thiene from 1560 to 1561. For the highly educated humanist Daniele I. Barbaro, whom Veronese had already known since the decoration in the Doge’s Palace, and for his brother Marcantonio Barbaro, he painted a fresco cycle in 1560-61 in the Villa Barbaro at Maser near Treviso, which is considered one of his main decorative creations. Between 1562 and 1570 Veronese also painted a portrait of Daniele Barbaro. In the 1560s and -70s he received commissions for altarpieces for the churches of San Zaccaria and San Silvestro in Venice, but also for churches in other places, such as the abbey church of San Benedetto Po near Mantua, Santa Corona in Vicenza, the basilica of Santa Giustina in Padua, and for San Giorgio in Braida in his hometown of Verona. Most of the resulting paintings are now in museums. 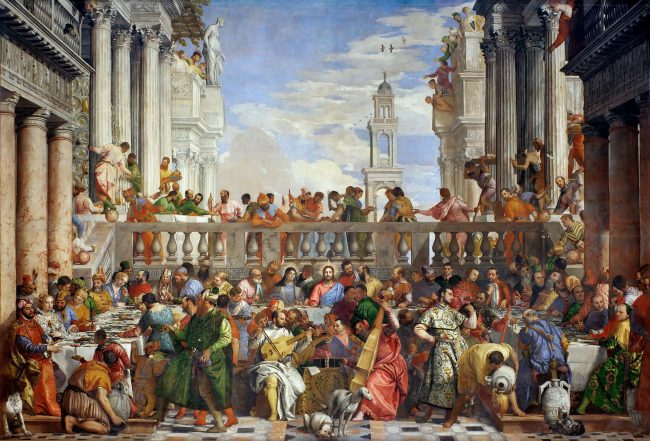 Veronese is especially known for a whole series of large-scale and magnificent depictions of banquets from the life of Jesus Christ. The first of these paintings is the 1562-63 Wedding at Cana for San Giorgio Maggiore, a huge mural 6.70 m high and nearly 10 m wide that was taken to Paris by Napoleonic troops in 1797 and is now in the Louvre.  In the painting he depicted a number of well-known contemporaries, including himself in the foreground as a musician, and his fellow painters Titian, Tintoretto, and Jacopo Bassano. He succeeded in creating a more intimate atmosphere in The Supper at Emmaus, which focuses more on religious events, with the client’s family and children (also in the Louvre, Paris).

Veronese’s Last Supper painting for the refectory of the Dominican church of Santi Giovanni e Paolo (now Accademia, Venice), completed in 1573, belongs to the same genre. It initially brought him some difficulties, but he managed to circumvent them with diplomatic skill and a trick. Veronese was arrested on 18. July 1573 by three Savi of the Sacro Tribunale in the Cappella di San Teodoro of St. Mark’s Basilica because he had painted in the picture “fools, drunken German lansquenets, dwarfs, and similar scurrilities” that were considered unseemly for a depiction of the Last Supper. Veronese defended himself not entirely without irony: “We painters take the liberties that poets and madmen take…. I paint my pictures with deliberation, in an appropriate manner, and with understanding … not as if I wanted to defend myself, but I thought to do it well. I did not consider that figures of fools were inappropriate in a place where our Lord was staying, nor did I think I was causing any disorder by doing so.” After the interrogation, the transcript of which is still in the Vatican archives, he was ordered to change the painting at his own expense, but this was later removed from the record. Veronese, however, changed almost nothing, only adding an inscription on the balustrade to the left and right: FECIT D. COVO. MAGNV. LEVI and LVCA CAP. V. Thus, instead of depicting the Last Supper, the image was now meant to represent the banquet at the house of Levi mentioned in Luke’s Gospel (Luke 5:27-32 EU), where the presence of mercenaries and “strange persons” was more acceptable.

Around 1575, he created one of his greatest masterpieces, the altarpiece of the Mystical Marriage of St. Catherine for the Venetian church of Santa Caterina (now in the Accademia, Venice). Veronese also painted portraits as well as mythological paintings, often with an erotic twist, notably several depictions of Venus and Mars (Galleria Sabauda, Turin; Metropolitan Museum, New York). One of these paintings (now National Gallery of Scotland, Edinburgh) was part of a series of four paintings for Emperor Rudolph II in Prague. In the Treviso area, after 1572, he also painted frescoes of ancient history in Magnadole Castle, including the Family of Darius and the Banquet of Cleopatra. After two fires in 1574 and 1577, Veronese was again commissioned to decorate the Doge’s Palace. In the process, in addition to eight allegorical paintings of virtue, he created the Allegory of the Battle of Lepanto (1575-77) above the Doge’s throne in the Sala del Collegio, and the ceiling painting Triumph of Venice in the Sala del Maggior Consiglio, completed in 1582. 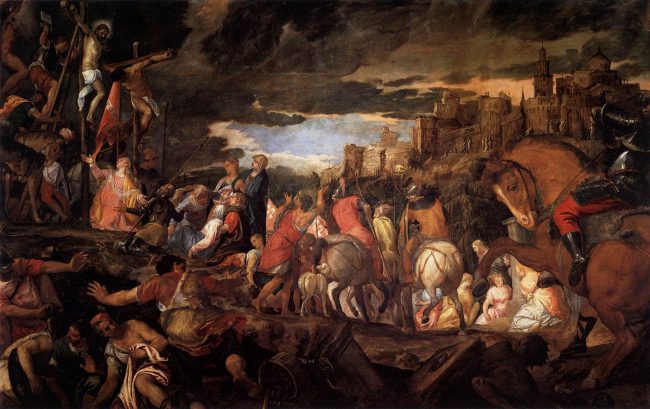 In the last decade Veronese’s style changed and became darker, simpler and more emotional. This phase includes eleven pre-1582 paintings for the Venetian church of San Nicolò dei Frari (or “della Lattuga”), which are now scattered in various locations, including the two wide-format paintings of the Crucifixion (Accademia, Venice) and the Baptism and Temptations of Christ, now in the Pinacoteca di Brera (Milan).  In the same gallery today is his late masterpiece Christ in Gethsemane, originally painted around 1583-84 for Santa Maria Maggiore. His last work is the altarpiece Conversion of St. Pantaleon through the Healing of a Boy, painted in 1587 for the church of San Pantalon.

Paolo Veronese died of pneumonia in Venice in April 1588 at the age of 60 and was buried in the church of San Sebastiano. A lifelong collaborator of Paolo was his younger brother Benedetto (1538-1598), as well as his nephew Alvise del Friso (1544-1609). Paolo’s sons Gabriele (1568-1631) and Carletto (1570-1596) also learned the painter’s trade from him. The Veronese workshop was continued after his death by Benedetto, and later by Gabriele, who sometimes signed as “Haeredes Pauli” (“the heirs of Paolo”). None of his successors ever achieved the artistic mastery of Paolo Veronese.

Karly Allan, Paolo Veronese: a moment in the story of Alexander the Great | National Gallery, []